Life Membership for Tina as club celebrates its year 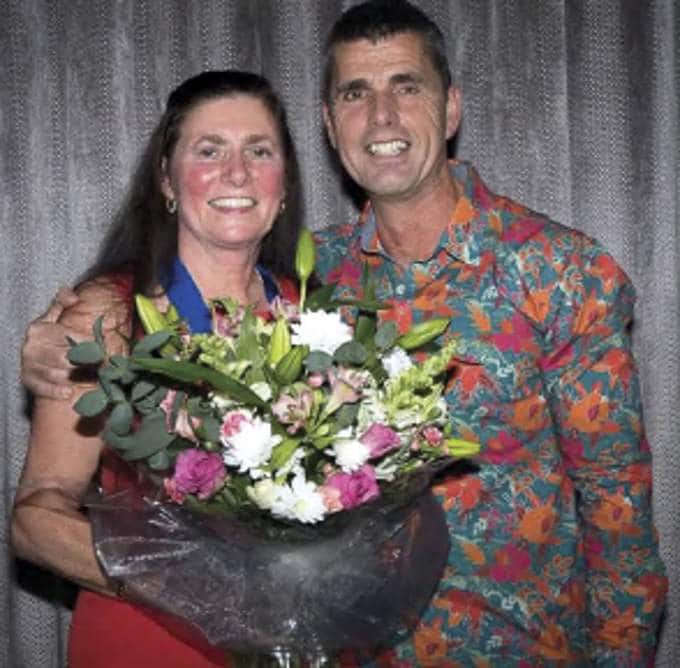 Compere for the evening was club chairman Roger Hayes, who delivered his award-winning speech expertly to the expectant Trotters. The president of the club, Tina Caunter, was invited to make the presentations.

Last year proved to be a logistical nightmare and very challenging for the committee members due to the pandemic. Many races were cancelled throughout the year, including the Trotter-run Templer Ten race.

A big thanks must go to our coaches and leaders for continuing the training sessions when permitted and to the Trotters themselves for adhering to the new guidelines.

Nonetheless, there were many personal achievements conquered, with new personal bests set at various distances as well as personal goals ticked off throughout the year.

Club Championship secretary Graydon Widdicombe had an unenviable task this year to source enough races to form a Championship, what with all the race cancellations, some at very short notice!

A new shortened Championship comprised six races to count from the list of selected races, with no race categories to choose from.

Four ladies and seven men qualified for each respective competition. Both Championships were keenly contested, especially in the female competition.

The Ladies’ Club Champion 2021 was Clare Youngman who scored an impressive 298 points. A superb achievement from Clare, who last won this prestigious title 15 years ago!

Runner-up was Deb Hart, who also amassed 298 points but was pipped to the post on a countback situation. Susanne Westgate finished in third place having scored 285 points.

The Men’s Club Champion 2021 was Gary Smart, who scored the maximum points tally of 300. Gary retained his title, and in doing so won his fifth consecutive Club Championship.

Runner-up went to Roger Easterbrook, who scored 290 points to edge out Alan Kember, who finished in third place on 288 points.

There were some fantastic performances throughout the season, but special mentions must go to Helen Anthony, Jacki Woon, Jamie Barnett and Julian Scanes.

Helen ran the fastest half marathon and marathon of the year, setting times of 01:30:34 and 03:09:25 at the Newport Marathon. Helen was duly awarded The Jose Waller Trophy.

Jacki clocked the fastest 10k time of the year while taking part in the club’s Newton Abbot Ladies’ Race.

Jamie set a new club record at the Cheshire Elite Marathon. Jamie’s new personal best is now 02:28:23 and he was awarded The Dave Foster Trophy. Good luck Jamie in the future while representing his new club, Newham & Essex Beagles.

Julian had a tremendous year, clocking fastest times in both the 10k and half marathon distances, on top of a new personal best for the marathon. Julian clocked times of 00:39:34 (Exmouth 10k) and 01:25:37 (Bridgewater Half Marathon).

The most promising female newcomer award was deservedly won by Megan Morgan. Megan is the club’s youngest member and is already showing great potential.

The most promising male newcomer award was won by Callum Price. Callum attends training consistently and is planning on taking part in some races this year.

The most improved female award was won by Clare Youngman. Clare has had a superb season, winning the Championship, running consistently well while producing some great performances along the way.

The most improved male award was won by Adam Johnstone. Adam clocked a fantastic time of 02:42:39 at this year’s London Marathon.

The Committee Cup, awarded for great service to the club, was won by James Saunders. James has provided detailed reports on a weekly basis, which are then sent to the press and uploaded to the Trotters website. He has been the press and publicity officer for the past three-and-a-half years.

The Dennis’s Cup is awarded to the best coach or leader of the year. This trophy is in memory of a beloved Trotter, Dennis Milstead. A poll is created so that the members can vote for who they think deserves the award based on their experiences whilst being coached or led.

This year’s winner was Joe Hornsby. Joe richly deserved this accolade, due to his coaching sessions being always tough but fun at the same time.

The John Stott Trophy was keenly contested, and was won by Corinne Bright. Corinne richly deserved this success, as she is rapidly improving and is certainly one to watch in 2022. Runner-up was newcomer Carl Bennett, and 2019 winner Deb Hart was third.

The Ross Cup, presented to the first Trotter tattoo finisher, was won by the popular Derek Skinner.

Tina Caunter was presented with a Life Membership for her services to the club. Tina was a committee member for 15 years and is still very active behind the scenes.

Last year proved to be a great year for The Teignbridge Trotters Club despite the obvious hindrance! There were some very fine performances achieved, and all members represented the club admirably where ever they travelled to race.

The four races that the Club organised all proved very successful, thanks to the hard work from the race directors and all the club volunteers who gave up their own time to assist.

The night proved to be a great success, and thanks must go to the staff at The Rec for the lovely buffet that was provided.

With all the formalities out the way, the Trotters partied as only Trotters know how!

Thanks must go also go to Keith Anderson, who in partnership with Roger Hayes put in a faultless awards ceremony. Also a huge thanks must go to Suzie Mills for providing her great photographs