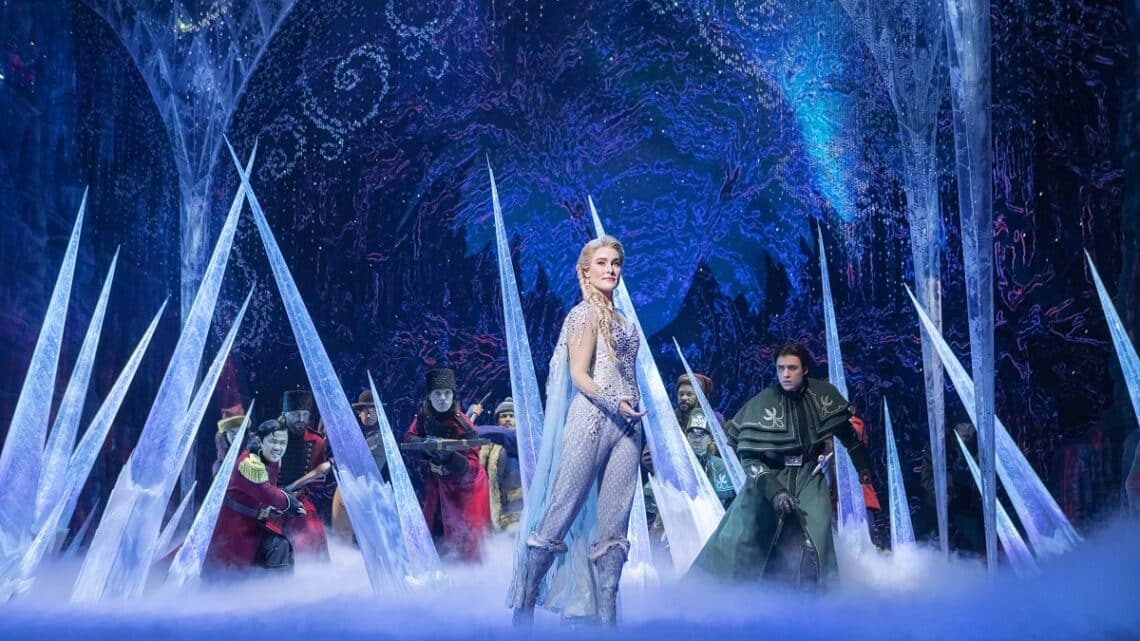 In 2013, Disney released Frozen, an animated film inspired by Hans Christian Andersen’s fairy tale The Snow Queen. It broke the mold on the Disney Princesses of old. Anna and Elsa are strong, empowered females, with hopes and fears (Elsa in particular). If you don’t know the storyline, just ask your daughters, granddaughters, nieces or the next door neighbour’s little girl – they are more than likely to quote line for line from the movie and sing the songs for you. The Broadway musical version has swept in like a blizzard to the Adelaide Festival Theatre for a limited time only. It is glorious! The stage version draws out concepts glossed over in the film version, like all good stage versions should. In particular, the darker side of the story line. On stage, Elsa has more fears of her self and her powers, particularly evidenced by a new Act Two song for her, Monster.

But, even though the stage show fleshes out the story line with emotion and troubled feelings, relax – this is Disney after all and there is plenty of happiness and enjoyment to be had. There are plenty of touches of humour to suit varying ages: cutesy child stuff all the way to gentle adult humour that the youngies will laugh at. Rob Ashford’s choreography follows through on this with a clever mash of stylised, modern techno and even a slight bit of hip-hop. The chorus line in Act Two will have you laughing all the way to the nearest sauna. Also, what is a Disney stage show without special effects and this Frozen has them by the glacier load. Elsa’s powers run rampant around the stage and don’t stop there. If you feel a little chilly during the ice scenes, you probably aren’t imagining it – but don’t worry, you’ll more than likely warm up In Summer. Very, very clever stuff! And, for those true aficionados who think that the story’s climax won’t work on stage – think again!! It’s so well conceived that on Opening Night it received a very deserved round of applause.

The entire cast is an absolute treat, but there are a couple of comic standouts: Aljin Abella, looking somewhat like a Scandinavian Tattoo from Fantasy Island, as the diminutive Weasel Town, sorry – Weselton; and Justin Anderson as Scandi storekeeper Oaken who, at the start of Act Two delivers what is perhaps the funniest line to ever break the ‘fourth wall’ of a theatre. Opening night saw Lochie McIntyre playing the companionable reindeer Sven, in what would have to be one of the most uncomfortable character costumes ever, with alacrity and ease. Young Elsa and Young Anna were played on the night by Amya Mollison and Hunter Ribeiro respectively. Both of these young ladies excelled in their roles, with Hunter being just the cutest little Anna with a huge voice.

As Hans, ‘thirteenth Prince in line blah blah blah’, Thomas McGuane has it all – good looks, fantastic voice, great moves and acting skills. Iceman Kristoff is played appropriately by Sean Sinclair and his rapport with Sven is adorable.

Everyone’s favourite snowman, Olaf, is played by the ever youthful Matt Lee. What a joy it was to watch Lee or rather his puppet capture everyone’s hearts from his very first appearance. Even though he is clearly seen manipulating Olaf, his expertise and fluidity make one forget that he even exists. If your eye does wander to the actor occasionally, you will still see Olaf’s expressions on Lee’s face. His performance just makes you want to give him lots and lots of ‘warm hugs’. Now to the Princesses themselves. Courtney Monsma (Anna) and Jemma Rix (Elsa) are brilliant. No little girl in the audience will be disappointed and the adults will marvel at their talent. Monsma displays some wonderful musical comedy talent that reminds one of the likes of Jill Perryman and Nancye Hayes in their heyday. As for Rix, what can one say but what a powerhouse of a performer! She dominates whenever she appears and yet her relationship with Monsma is so sisterly. Rix brings the fear and anger at herself to very believable heights – we live each moment of anguish with her. She is every bit as dazzling as her Act One finale costume and frozen palace surroundings.

This Frozen will do anything but to your hearts and souls.

Rush to see this show. Don’t let it go away without seeing it. It’s more fun than wanting to build a snowman.

Suitability: Ages 4 and up

Warnings: Please be suggested that Frozen comprises smoke, haze and flashing lights. The present doesn’t comprise any conventional strobe results, nonetheless there are a number of scenes the place vivid white flashes do happen.

Lockout interval applies. Patrons arriving late won’t be admitted till an appropriate break within the efficiency.

I met my man a month ago

Meet the jockey who loves motorbikes, is covered in tattoos – and rides the favourite for the Derby – The Telegraph

Meet the jockey who loves motorbikes, is covered in tattoos - and rides the favourite for the Derby - The Telegraph