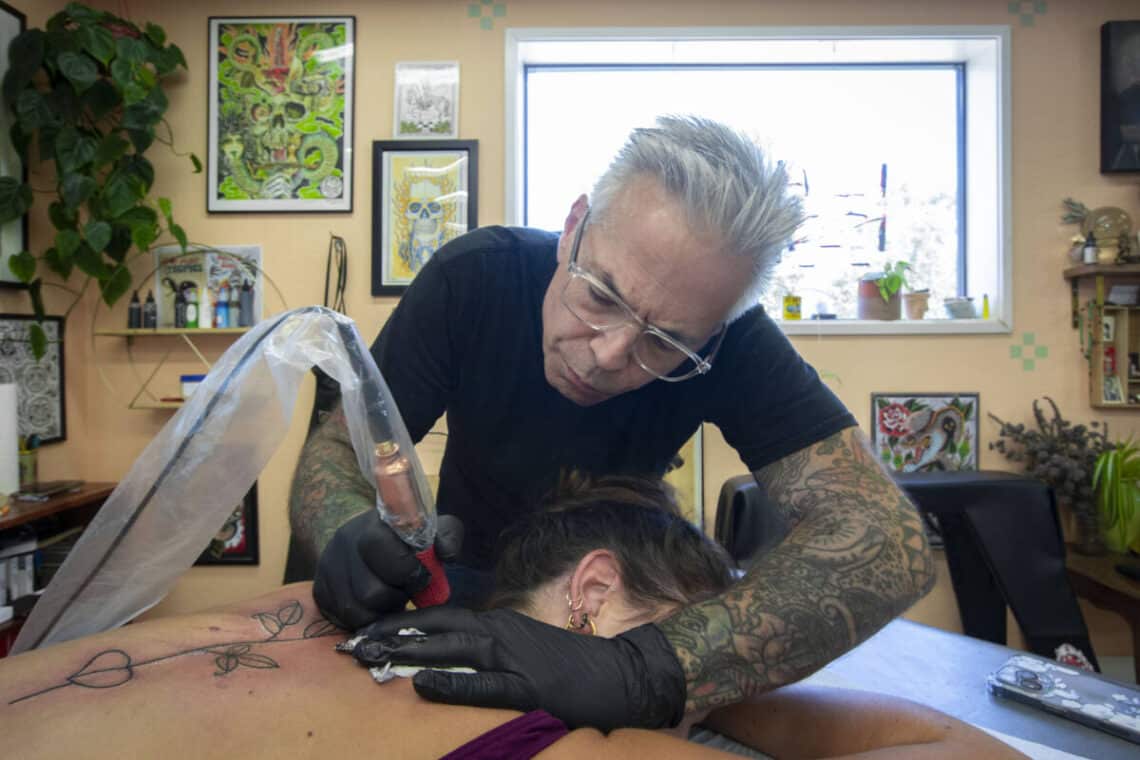 According to artists, the Sonoma Valley tattoo market is experiencing a boom.

The pandemic has capped ink supplies on most tattoo services through 2020. Local artists who have emerged from this crisis are experiencing a noticeable uptake in their demand.

In fact, the needle is moving on tattoo art in more ways than one across the entire industry, with online searches for “tattoos” up 48% since March 2020, according to Google Trends.

“It’s just huge,” Sonoma Valley tattoo artist Jim Valavanis said this week about the surge he’s seeing in clientele. Valavanis believes the recent tattoo zeitgeist is a combination of factors coming into play just as the pandemic bottleneck in services opens up — notably the proliferation of tattoo on social media.

“It used to be you’d go and pick something off the wall, or out of tattoo magazines in a shop,” Valavanis said. But these days clients come in with something they’ve already window-shopped on Instagram.

“I’m kind of like an old timer,” laughs Valavanis. “I brought out a tattoo magazine to show someone an idea and the other artist (in the shop) was like, ‘Wow, I haven’t seen one of those in forever.’”

Valavanis, 56, is a seasoned veteran of the Sonoma tattoo scene – his Highway Tattoo on Sonoma Highway was one of the only games in town up until 2008 when the Great Recession drained too many of his clients’ disposable incomes and he was forced to close. But after stints working for an events management company and running a handyman business – he’s operated Handy Jim Dandy for the past four years – Valavanis was lured back to tattoo art by the owner of a new tattoo shop, Rosa Grande, at 18506 Sonoma Highway, where he currently works his magic “a couple of days a week.”

Jessie Marioni opened Rosa Grande in April 2021, deep into the dog days of the pandemic when tattoo studios and other businesses requiring physical closeness were still emerging from particularly strict health guidelines, including a lengthy state-mandated closure that didn’t end until October 2020, weeks — and in some cases months — after other types of businesses were allowed to reopen.

Many tattoo shops were forced to close permanently due to financial stress and uncertainty. Shotsie Gorman, a long-standing Sonoma Valley artist packed up his Tarot Art and Tattoo Gallery He moved back to East Coast earlier in the year, where he wanted to experience a stronger tattoo culture.

Marioni decided to take on the tattoo business in Sonoma because she felt it was in the right climate. She’d been commuting to work at a tattoo studio in Petaluma, but sensed an opportunity for a more casual business in Sonoma.

“Shotsie was still around, but his was more of a private studio, with a high-art vibe,” Marioni said. “I felt Sonoma needed a drop-in tattoo where you could just walk in and get whatever you want without an appointment.”

It was an untapped market, she said, and felt that “if anyone was to open up a tattoo shop in Sonoma I should do it.”

Her timing turned out to be perfect. In the summer of 2021, several national media outlets began reporting on a “boom” in the tattoo industry. From the Washington Post and the San Francisco Chronicle to Time magazine and Business Insider, headlines boasted of soaring sales and spikes in body art requests — in some urban centers by as much as 50%.

IBIS World market research estimates that body art, which will reach $1 billion annually in revenue by 2021, has grown steadily over the last several years. Today, about 46% of Americans have at least one tattoo, according to IBIS, with the popularity of body art growing fastest among millennials who don’t associate the type of social stigma that may have been attached to the art in the 20th century.

The pandemic has ended, and the rise of remote work has liberated the body from traditional office dress codes.

Alexis Ginez of Dedicated Arte in 18995 Sonoma Highway can confirm the increase in business. “A lot of people are calling in,” said Ginez. “A lot more than even six months ago.”

He thinks more people are “feeling safe” about it, “they’re ready to get back to normal.”

Valavanis stated that tattoo artists should be safe in the event of a pandemic. “As a tattooer, you always treat people like they could give you something” and act accordingly, he said. “Since the pandemic, people come in wearing masks sometimes,” but it doesn’t seem to affect business.

Marioni thinks the pandemic gave a lot of people extra time to reevaluate their priorities which, it turned out, weren’t to sit at home doing the same thing day after day – as was the situation for many during the health crisis.

“Coming out of the pandemic people were kind of itching for social connection and ready to leave their house and have an experience,” said Marioni. “Whether it’s tattoo or something else, people are just ready to have experiences.”

As for Valavanis, he’s seen body art trends come and go and is just happy to see current technological advancements couple with the end of the pandemic to help further usher tattoo into the mainstream.

“I’ve been in the business since 1994 and when I started there was this wave generated by old-school guys like Ed Hardy,” said Valavanis of the influential Bay Area artist. “Now there’s thousands of amazing artists out there.”

It’s a great time “to be back in it,” said Valavanis, nearly 14 years after the demise of Highway Tattoo.

And this time, he adds, “It’s nice to do tattoo and not worry about owning the shop.”

Margot Robbie’s Tattooing Profession Has Gone up in Flames

Margot Robbie's Tattooing Profession Has Gone up in Flames