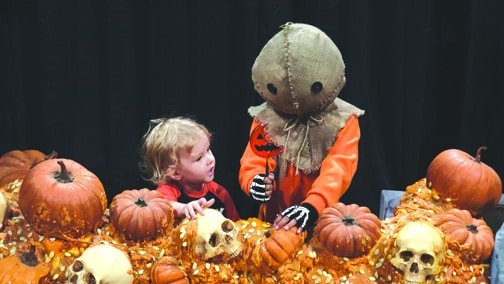 Each summer the Halloween Haunt Season begins. This is when haunters across the nation prepare for their horror Halloween before welcoming visitors in October’s final weeks. As haunters enjoy their last days of “free time,” a convention is held in Long Beach for haunters to share skills, get together and have a “swinging wake.” This is Midsummer Scream, and it has finally returned after being postponed two years due to the pandemic.

When the pandemic hit in early 2020, we all knew that conventions weren’t going to be happening anytime soon. Of course, 2020’s Midsummer Scream was canceled entirely. It was decided not to host a full convention the following year due to ongoing health issues and concerns from vendors and attendees. Midsummer Scream presented “Awaken the Spirits,” a smaller version of the show held at the Pasadena Convention Center rather than the Long Beach Convention Center, its usual home. And while “Awaken the Spirits” was a wonderful return to form and had many of those favorite aspects that guests had come to love, it did feel like a smaller, less engrossing version of the full convention. This year’s convention was back at full strength, with a Hall of Shadows that featured mini haunts and performance demonstrations by sliders.

Midsummer Scream, a convention dedicated to haunters. This includes those who make and present haunted houses and other Halloween displays, and also fans of horror, monsters, and haunts. Los Angeles is a major film city, so many special effects artists, makeup artists, and set designers spend several weeks building elaborate, fun Halloween displays. It is an amazing experience to be able to benefit from their expertise as well as those of haunt groups like Universal Studios Hollywood or the Los Angeles Haunted Hayride.

Last weekend, the convention attracted a sold out crowd to Long Beach Convention Center. The convention was attended by horror stars from screen and stage, along with big names in haunting such as John Murdy, Universal Studios Hollywood Halloween Horror Nights. Murdy gave a talk about Universal Studios Hollywood Halloween Horror Nights, which will start Sept. 8. He announced another haunted house theme – “Scarecrow: The Reaping.” This is based in history, in the Dust Bowl of the 1930s. As silent guardians over dying fields, scarecrows served as a watchdog for farmers in America. So in the plot of the house, the scarecrows have decided to make this land their own and increase their numbers in the same way they were made in the first place – by making more scarecrows. However, scarecrows now make people scarier than humans. Murdy showed guests some concept drawings for scarecrow characters and various rooms. He also explained the research he did in order to create the props and sets for his 1930s-era farmhouse.

Murdy welcomed Slash, the famous guitarist who collaborated with Universal over many houses. Slash is well-known for his Universal Monsters houses series, which will be launching a second installment this year. The attendees to the panel were treated to a listening party of some of Slash’s previous work for Universal haunted houses as well as a preview of a track that will be used for this year’s “Monsters Collide” house.

In addition to panels and demonstrations of how-to prop building and makeup, convention attendees had the opportunity to shop for scary Halloween clothes and to meet other horror characters. A tattoo booth was available for guests to sign up and receive their tattoo right away.

This year’s show was a fantastic return to form and now, having attended once again, we didn’t realize how much we really missed it. The full show is a highlight of the summer and, just as we are all getting sick of the 90-plus degree weather almost every day, this convention is a reminder that fall is coming, sooner than you think, and it’s time to gear up for haunt season.

Seeing as this year’s show did sell out, it may be wise to sign up for the Midsummer Scream mailing list for anyone interested in attending next year. Watch out for an email reminder about tickets going on sale.