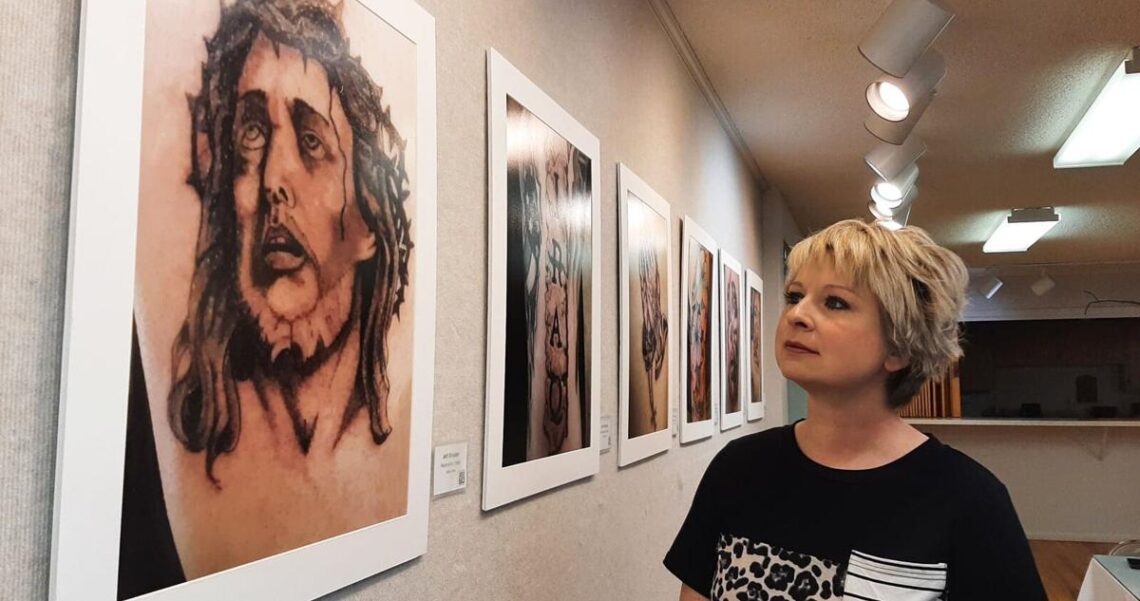 He was off for the day, but Jeff Shuster, tattoo artist, had a crucial job.

Redemption Tattoo Fremont was visited by about 12 people hailing from different parts of the country. They were in town for a man’s funeral and each one wanted to get the same tattoo in his memory.

Fremont Area Art Association (FAAA), is hosting an exhibit that features the work of local tattoo artists. The Dugan Gallery in downtown FAAA Building shows the intricate details and variety of images that become permanent art people take with them everywhere they go.

FAAA Executive Director Lindi Janulewicz said the exhibit, called “Tattoo Art,” includes about 40 pieces. Some pieces can be framed. Some of them are three-dimensional.

The exhibit includes the work of Redemption, Eternal Tattoo and Body Piercing artists from Fremont.

Several people attended a recent Friday night artists’ reception at Gallery 92 West, where they could meet Shuster, who co-owns Redemption.

“The reception was very well-attended and we were delighted that lots of family and friends could come and support the artists,” Janulewicz said.

Shuster led a question-and-answer session in the evening.

Shuster could tell his guests that although the neck is popular for tattoos it can also be one of the most challenging places to tattoo.

The bicep is an easier place to tattoo, because it’s flat and people tend to tolerate the process well. Many women want to have tattoos done on their feet. However, that is often a delicate area.

Shuster Beaudette and Aaron Beaudette (owner of Eternal Tattoo) will be speaking about their work during Third Thursday Lunch and Learn. It starts at 11:15 a.m. on Thursday Aug. 18 at the FAAA Building at 92 W. Sixth St.

They will also discuss the history of tattoo technology and how it has changed over time.

Janulewicz expressed appreciation for the artists and the FAAA’s latest exhibit.

“I am pleased that our gallery can display lots of different kinds of art and I think sometimes tattoo art is overlooked,” Janulewicz said. “I’m pleased to shine a spotlight on the true talent that these artist possess, because they’re working with a difficult medium on a difficult canvas and they are able to translate clients’ wishes into images that they wear and live with for their entire life.”

Another thing she noticed was

“I think that’s pretty incredible that they’re able to interpret those wishes and stories and life events into an image so beautifully,” Janulewicz said.

There’s often a story behind a tattoo.

“I think it’s very, very interesting how we can walk by someone and not have any idea what that image means to that person,” Janulewicz said. “It could be a memory. This could also be a memorial. It could be homage to something they’ve gone through in their life and that they never want to forget.”

Shuster recalls the hours he spent tattooing people who came for the man’s funeral. The majority of memorial tattoo recipients were men. A couple of girls were also able to get matching tattoos.

Because it was the only day that the individual could have the tattoo, he worked during his off-day and is grateful he was able help.

Shuster enjoyed the camaraderie of the people who got tattoos.

Janulewicz shared the respect she has for tattoo artists.

“I think it’s sometimes overlooked that these artists are sometimes doing things for people to help them cope and I think that’s really admirable,” she said.

For the remainder of the month, the show will be displayed in the gallery. The gallery hours are from 1-4 pm on Tuesdays through Sundays.