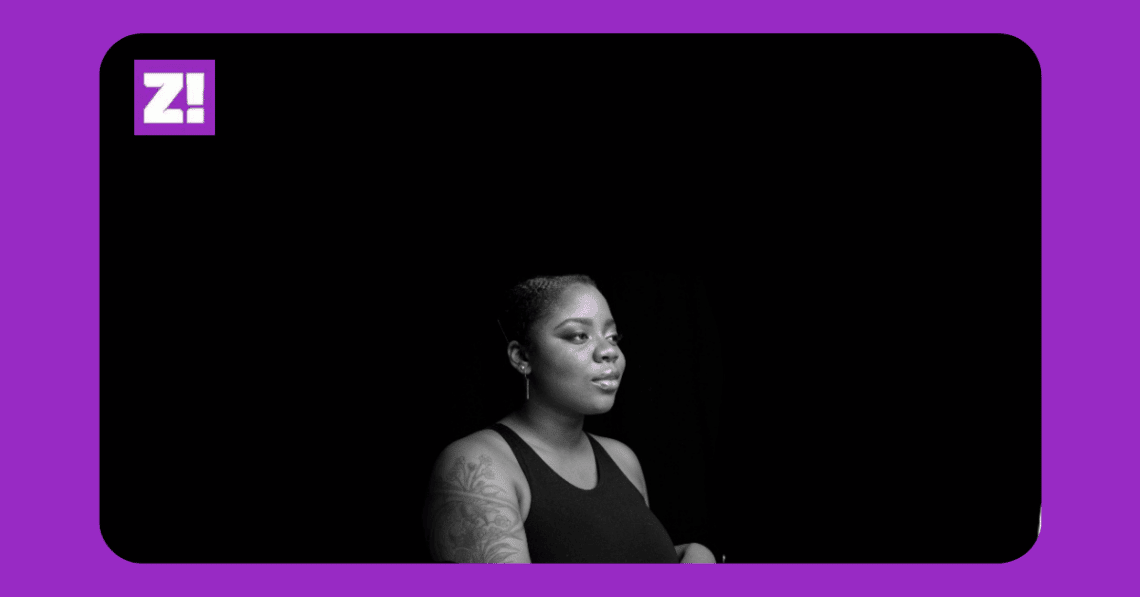 My name is H,  I like to live almost anonymously. I don’t want anybody to be able to remember me, so I can up and go whenever.

Outside my 9-5, I’m a tattoo artist and body modification enthusiast. My strength was enough to throw the discus. But ask me to take a 20-minute walk now; I’d rather die.

I’d love to hear all about your tattoo journey

I’ve been a tattoo artist for almost two years. This happened after I moved to Abuja, in the latter half of 2020. My friend was having his tattoos done and invited me to join him. I went there with plans to get a tattoo but ended up telling the tattoo artist — now my business partner — to teach me. He asked if I was serious, and that’s how it started. He taught me, and I watched as he tattooed. In a little under a month, he was tattooing someone and had to leave, so he turned to me and went, “You’re up.”

Wow! That’s bold! What was it like to do that first time?

It was so exciting that my heart was beating faster than usual. The person who was there didn’t know what I was doing. I was sitting at his table, waiting patiently for him to give me his body. It’s a new learning experience each time. Everybody’s skin and healing levels are different; needles and ink react differently too. It’s very intimate when someone leaves their house and says they want to pay you x amount of money to permanently mark them. This is when my confidence soars.

Which was your first tattoo?

It was one Japanese character. I don’t remember what it means now. My partner did the linework and it was just me who had to do the shading. Fake skin was nothing to compare with the real deal. It’s all about confidence and mastery. This is a great looking piece.

Have you ever messed with a tattoo?

No. My issues were related to healing. I did not give my customer aftercare instructions. When I tattoo people, I text them every day within the first two weeks, but every time I’d text her to show me the tattoo, she’d weasel her way out of it. After ghosting my for about a month she finally texted me, saying that the tattoo was too painful. I tell people they can’t go to the gym or go swimming until their tattoo heals, and they just do what they want instead. I had to stop her from using aloe Vera, and she completely forgot my instructions for aftercare. But at least, it didn’t get infected.

What’s the most common mistake people make after getting a tattoo?

Because tattoos are open wounds they can itch and your skin will try to hide them. The tattoo may be picked at by people who don’t realize it has less pigmentation than others. They’ll need to come back and get it touched up. Don’t itch new tattoos. For first-timers, you can start small or medium tattoos in less sensitive places, such as the arms. I’ve tattooed someone on the back of her ear, and she said it didn’t hurt. For their first tattoos, women would be able to get painful ones and still manage to take them in the stride. You can tattoo your spine or ribs down, but they won’t be afraid.

Now, I’m scared of getting a tattoo. What’s the most challenging tattoo you’ve done so far?

Haba, it’s not that bad.

I’ve tattooed over 50 people, so let’s see. I’ll say the person that ghosted me for a month without completing her tattoo. It was supposed to be an interpretation of the Gemini zodiac sign — a huge double-sided head on her back, which must’ve been painful for her — and we could only do one head the first day. She’s come back for a bunch of other tattoos since, but we haven’t gone back to the Gemini one because I want to see how it continues to interact with the ink. So that clients can heal, I prefer to do my tattoo sessions on the weekends. But there are so many styles of tattoos I haven’t tried yet.

There’s black and gray realism; that’s my partner’s specialisation. There’s blackwork which I’d like to do full time, but I don’t think the average Nigerian is ready to commit to that. I imagine it’s painful, but it always looks cool. Maybe I’ll convince a client to let me give them a free one and see how it goes. The word of mouth is a big part of tattooing, so referrals can be based on quality work.

Does this mean Nigerians aren‘t daring with tattoos?

To be fair, everybody is getting tattoos now, which I love so it’s a 50/50 situation. People want many tattoos. There are also people with sentiments attached, who only get one. There are those who want one but don’t want to commit to getting anything over the top, so they go for simple stuff they can easily hide. But not me. I have big tattoos, and when I get asked if it affects my 9-5, I’m like if I walk into a room with my tattoos showing and you decide not to work with me professionally because of them, that’s on you.

What’s your 9-5, and do your tattoos affect it?

In a media firm, I manage a small number of writers. So, no. I just get stares. My mouth is pierced. By the time I smile at you, you’d know what you signed up for. My advisory board included people from the Ministry of Justice and various NGOs. So I tried to hide some of my tattoos because I understand it’s a lot to take in at once. Although I was wearing a short-sleeved shirt, you can still see my partial parrot tattoo. After we were done with the session, people came over to see the tattoo because it’d been distracting them. They asked what it meant, and TBH, I don’t know. It’s just a parrot named Polly.

She has a parrot tattoo

Do you have many tattoos?

I have currently five tattoos, all of which are very large. At this point in my life, I don’t want to get a small tattoo. Some lines run through my armpits are the most difficult. But, my tattoo artist “wisdom” is when the needle stops, the pain stops.

Floral tattoos are my favorite. Because I am a lover of flowers, I think my body is a garden, and eventually, when we die, we’ll return to the earth, so why not prepare myself for that, I suppose? I have a tattoo that’s half face, half flower. So when people ask what it represents, I tell them it’s a tribute to the Mayan goddess of tattoos and body modifications. It’s on the back of my right arm, so it helps me to say a little prayer to the goddess — like, madam, I want to tattoo somebody, bless me.

What do you think tattoos should mean?

I don’t. If you like a tattoo design because you think it’s cool, do it. I love people who just get one for the fun of it. It’s bold to come in and put something on your body that has no bearing on your life. In fact, you’re a hero. When people ask, “what if I change my mind?” I say, “well, you get another one”.

Every day, people change their mind. I don’t do cover-ups, but my partner does. This couple came in for matching tattoos. Then, a few months later, the other one returned with their new cover-up. Tattooing is fun like that, but it would be more fun if I didn’t have to take it as a business.

Oh? It’s not fun because you’ve had to monetise it?

Not just because I’ve had to monetise it. We’re in Nigeria. It’s not very popular to tattoo here. We need to ship most of our equipment, needles and ink. As the cost of shipping continues to rise, we have to increase our fees to maintain some profit. When clients come in, and we say how much it’ll cost, I feel bad because I don’t want to charge so much, but the country is weird.

The size of the property, its location and style will all affect it. A small one would be about ₦20k. I can’t say for the big ones. But the tattoos on my body probably round up to ₦500k. The biggest tattoo I’ve drawn was for a client-turned-friend of ours. It covered half of his back and took us two sessions; it cost about ₦300k. We are not the only ones who charge higher than others; every tattooist charges differently.

Oh, I’m not judging. The artists are right about art costing as much as they think.

Exactly. Your body can take a beating from tattooing. We bend over people’s bodies for hours. We’ve had clients leave the studio at 2 a.m. You have to be awake for a long time and be alert. If I have to tattoo something big, I don’t eat so I don’t get tired. It’s a lot of work. It’s important to calm anxious and scared patients as well as address their health problems. Is your blood pressure high? You might bleed a little if you’re any of these things.

What’s been your favourite career moment?

I called to Adrian Harlow once. For people with coloured skin, she does tattoos in coloured designs. This can prove to be quite tricky. She gave me some tips and it was great. Apart from black, I’ve only done red tattoos so far.

I find every moment to be my favorite. If you want to see me after I have finished a tattoo I will always be smiling the most. Sometimes, I’m so jealous of the clients because I wish I had their tattoo on my body. Recurring clients are also something I like. We had 5 people visit us recently to have the same tattoo. That was very nice. We’ve had people come with a friend and decide to get one too. It’s all just enjoyable to witness.

Where will we be in the next two years?

If I’m not dead, I should still be tattooing. Tattooing is usually a man’s thing, but we have more women like me doing it now. I would love to open my own business. I love working with my partner, but who knows where he’d be five years from now? The world changes, people get married or grow up. His best gift was to me. Funny fact: The tattoo that I wanted was not what I got. I still haven’t got it. It’s supposed to be a cat drinking wine. Now, it’s a running joke between us.

You could tattoo any thing on your body, but what would it be and where?