Ohio Man Delivers Message to Traverse City Through a Tattoo 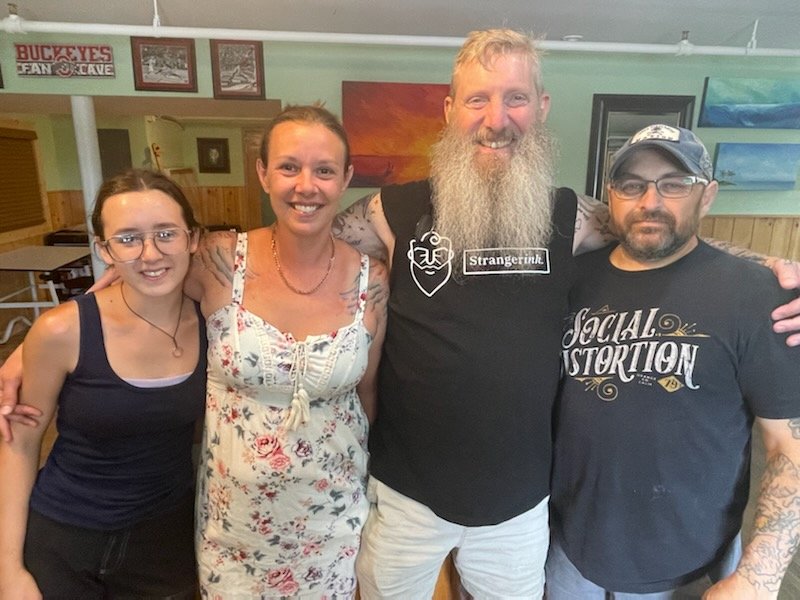 Ohio’s terminally ill man is spreading positivity in northern Michigan by sharing his positive message. He’s bringing his charisma, his hope, and his attitude and sharing it in an unusual way: by sharing “ink” with complete strangers. This all began with his cancer diagnosis a few decades ago. Now he hopes to inspire others.

It’s showing the permanent power a tattoo can have.

Don Caskey is battling kidney cancer, but he’s not letting that slow him down. “I was diagnosed with terminal cancer two and a half years ago. My only hope for my final days is to carry with me memories. So I said I’m going to go ask random strangers to get matching tattoos, make a human connection. It’s a memory I can take with me when I pass away and leave a memory on them after I go.”

He’s trying to spread positivity and inspire people along the way – by spreading ink on his body. The process began slowly on August 23, 2020, two years ago. He had only half a dozen tattoos at the time. But soon, ink began to flow. “After about 8 weeks I got one. In three months I was able to have 100. And it just kept, it got way bigger than me,” he said. Now, he can’t stop.  “Including ones I got on my own, 505. So I’ve got quite a few.”

Don is up to 500 tattoos – most of them he gets with complete strangers he meets on the way. The two of them get matching tattoos. “Every individual tattoo I’ve gotten is a story with that person. And it’s – they’re all unique.”

Don and Elizabeth Pello met on social media. She is now getting a matching tattoo at Traverse City. “I saw him on social media and started following him. He has an inspiring story and seems like a cool guy – and he is.”

“I thought about getting a little goat, because I have goats and goats are cool. I don’t see a goat anywhere on him. He’s got pretty much everything else,” Pello says.

Don’t be afraid to ask for help with anything. “I put it where I can fit it, they put it where they want it. Sometimes, they choose the item. Sometimes we pick it together.”

It’s all part of his nonprofit – called “Stranger Ink” – designed to raise money for funeral expenses for people with terminal illnesses. “When you get a terminal illness, or sick period, it can take everything you’ve got. And most people spend what money they’ve got trying to stay alive.”

Pello resonates with this message. “I’ve had a lot of family members pass away from cancer. So it kind of hits home a little bit.”

“He’s got terminal cancer and you wouldn’t know it when you talk to him. The attitude is so positive,” says tattoo artist Ram Lee. He did Don’s first tattoo 16 years ago – purely by coincidence.

“The first tattoo I ever got was my kids’ names. Back 16 years ago,” Don said. Lee discovered him via social media last January. As Don tells it, “He said ‘man I’d love to meet you if you come up to Traverse City. Hear your story, tattoo you and whatnot.’ I said ‘bro you did my first tattoo 16 years ago!”

Lee giggles and tells Don that Don has improved since the time they first met in Toledo. “I’ve done over 20,000 tattoos. I try to remember everybody but it’s impossible.”

Don said that every one of these 500 tattoos is memorable. Some were done for very serious reasons. Others make him smile. However, he takes notes about where and when he got each of them.  “We’re all just people. I don’t care who you are, where you come from, economic background, color of your skin. All of it. It doesn’t really matter. We all have something in common.”