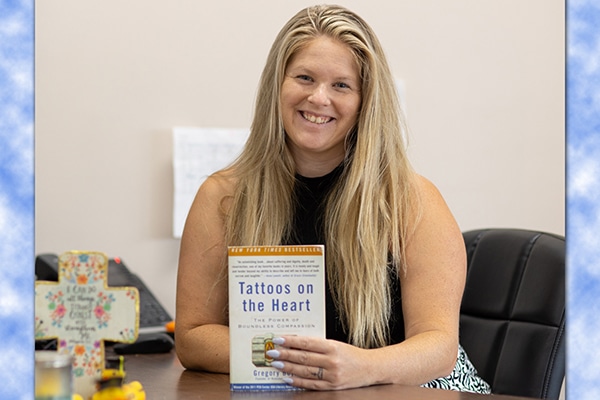 Editor’s Note: The Catholic Star Herald is asking known book lovers around the Diocese to recommend their favorite reads and explain what makes these not-to-miss tales. This is part 2 of an occasional series.

Alaina Silber estimates that she’s read a dozen books since the end of the school year.

The Gloucester Catholic High School English and religion teacher says she loves the freedom books can bring – transporting one to encounters with new worlds, new people and new ways of thinking.

It’s a lesson she’s tried to impart to her English students, among others. “Not only do books help one escape, they teach them how to read, write and speak,” she says.

A service-learning class for seniors is also offered by her. This course helps them to understand Catholic social teachings and their tenets regarding solidarity and dignity.

So, Silber’s class is read every year. “Tattoos on the Heart: The Power of Boundless Compassion,” Father Gregory Boyle SJ. (2010).

First encountering the book 10 years ago, Silber said the story “shook me, and helped me to understand that God just wants to love us where we are at, in our holiness. I don’t have to be perfect.”

Through powerful and moving personal stories and anecdotes, the Jesuit priest recounts his time serving in gang-ridden Los Angeles in the 1980s and 1990s, and guiding the city’s youth to understand love, dignity, patience and respect.

“[Father] Boyle is pursuing the message of God and sharing Jesus” to those otherwise shunned by society, Silber says.

For her service-learning students, the book’s contents are invaluable, especially since they spend time volunteering at places such as Camden’s Cathedral Kitchen – providing food to the poor and homeless – and Saint John of God Community Services, Westfield, where they aid those with special needs.

Father Boyle’s short episodes on grace and compassion “help Gloucester Catholic students encounter the stranger and form a relationship with them, recognizing that we are brothers and sisters,” she says. “At the same time, it’s a beautiful book on understanding our own identity and importance in God’s eyes.”

“I reread it every summer, and every time, I get reminded why I love this book.”

• “A Ballad of Songbirds and Snakes” Suzanne Collins

Top 4 Lubricants You Can Try After Getting Your First Tattoo

Top 4 Lubricants You Can Try After Getting Your First Tattoo