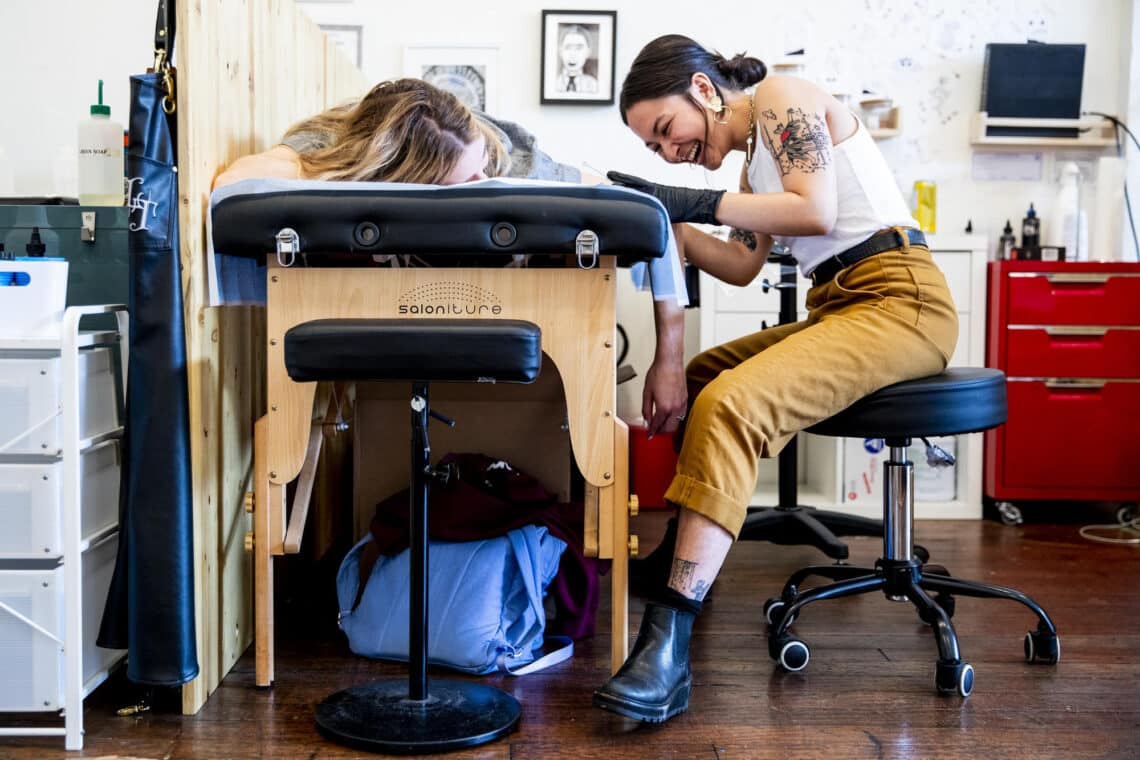 The Lilith Tattoo Shop in Fremont, contrary to many other tattoo shops that have dark walls, heavy metal music, and a grungy appearance, is brighter than most. It has a large windows and is filled with soft, white music. “I feel like you have a calming presence,” Clinkenbeard says to Osajima, who says the same thing back to her immediately.

This is Clinkenbeard’s second tattoo — but her first via the “stick-and-poke” technique. This Instagram-famous DIY method allows tattoo artists to only use their hands and a steel needle to press ink onto skin. Having received her previous tattoo (the word “Glory”) via the standard motorized method, Clinkenbeard reassures Osajima that the stick-and-poke tattoo process is “exponentially more comfortable and enjoyable.”

Osajima, one of the many queer artists who live in Seattle and work at a shop run by a queer individual is just one example.. Jude Vesvarut, who goes by they/them), opened Lilith Tattoo In 2017. Osajima, like many other female, queer, and non-white tattoo artists prefers an environment which caters to the LGBTQ community more deliberately.

As tattoos have become more widely accepted in the mainstream, queer shop owners and artists say they are reimagining the culture as one that’s more inclusive and welcoming (rather than the old-school, rough-and-tumble rebel vibe). The stick-and-poke technique reflects this atmosphere because it’s less aggressive physically, moves at a slower pace and feels more intimate — partly because the lack of machine whir allows for close talking.

Spaces like these offer judgment-free zones that feel safe to queer customers — not only accepting of all bodies but understanding of their scars and gender transitions, says Lilith’s Vesvarut.

“[Tattooing] is a very intimate thing, you’re in a vulnerable space and you’re receiving pain,” Vesvarut says. “If you feel physical pain and don’t feel emotionally safe it can be traumatizing.”

As LGBTQ people have claimed the name queer (which used to be a derogatory term), tattoos are now a way for them to express their feelings.

Sylver Fawkes, a transgender artist at Lilith Tattoo, says tattoos allow queer people to put their “inside on the outside.”

“The more we can express our own individuality, the happier we are,” says Fawkes.

Vesvarut jokes that tattoos have become such a huge part of queer culture that it’s now more fringe if a queer person doesn’t Have tattoos. “It’s helped reclaim and empower our bodies,” Vesvarut says.

On Osajima’s left middle finger is a hand-poked Japanese character of her father’s name. It’s the first stick-and-poke tattoo she did on herself. Osajima, who identifies as Yonsei (a fourth generation descendant of Japanese immigrants), says it’s incredibly rewarding to see her own experience as a queer person of color reflected in the work she does. Her clients include queer individuals, Japanese Americans and some staff of the local non-profit. DenshoThe book, “The Japanese Interment Camps during WWII”, documents these experiences.