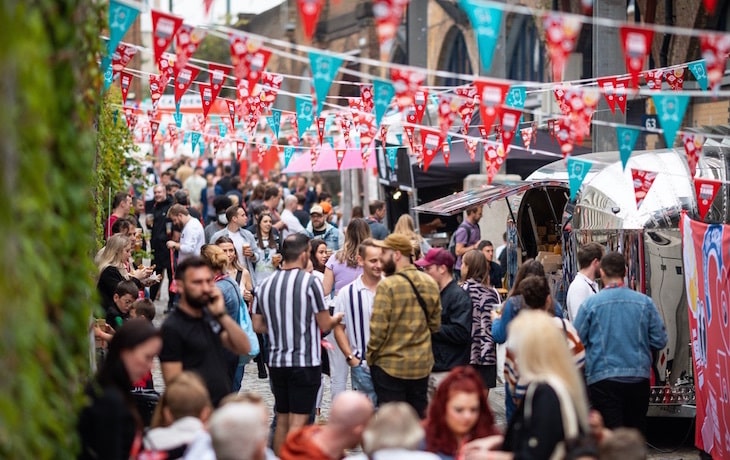 TOTALLY THAMES London’s River Festival is Back! Enjoy a Month of Tours and Cruises, Music Performances, Talks, Art Installations, Theatre Shows, Guided Walks, and More. Step into history this weekend Watermen’s HallHear from the author Ben AaronovitchYou can also try your hand at it. sea kayaking on the Thames — just a tiny selection of the full programme. 1–30 September

PUB IN THE PARKS: This summer’s final London stop Pub in the Park Three days of live music, food and drink await you in Chiswick. Craig David, Beverley knight, and Sophie Ellis-Bextor will be performing live music, while Tom Kerridge is among those chefs. 2 – 4 September

LONDON TATTOO SHOW Do you want to be inked? Both experienced tattoo artists and novices are welcomed at the Big London Tattoo ShowThe venue has more than 360 top-notch tattoo artists. You can also enjoy sideshows, fairground rides and other entertainment. 3-4 September

DANCE IN YOUR TTYLE Both Saturday SundayRed Bull Dance Your Style, a dance contest, is free to watch. The audience votes will determine which dancers go head-to-head to win. Street dancers will be performing to funk, hip-hop, and classic hits, as well as live DJs. Free, between 3-4 September

THE SECRET GARDEN: This is the last week of The Garden Museum’s summer holiday exhibit. The Secret Garden. It’s a celebration of Frances Hodgson Burnett’s beloved classic children’s book The Secret Garden, showing how different artists have illustrated it in the century since it was published. You will find family-friendly trails and games. Children go free. Until 4 September

EDVARDMUNCH This week’s closing is Edvard Munch Masterpieces From Bergen. This major exhibition of 18 Munch paintings at the Courtauld Gallery is first to be shown in Britain. It includes his early paintings and his more expressive later works. Until 4 September

BBC PROMS The final week of the current year is approaching. BBC PromsYou can enjoy live music all weekend. Glass HandelPrintworks London presents a spectacle that juxtaposes works of Philip Glass and Handel. Until 10 September

GDIF: The giant rotating zoetrope This was made for Burning Man. theatre productionAnd a rainbow island of foam. Here are some highlights from the year. Greenwich + Docklands International FestivalThe, which continues week after week. Most events All Rights Reserved, Free of Charge, up to 11 September

LITHUANIAN MEMORIES: For more information, visit ArtsDepot North Finchley Walk with me through my Memory LaneRegina Skridailiene’s art exhibit, titled. This series includes artworks that explore childhood memories as well as landscapes of her early years in Lithuania. Free, between 3 and 17 September

For the entire family, a pawfect day of fun

Join EcoWorld Ballymore this Saturday for a free event Embassy Gardens Pawfect Street Party Nine Elms. This family-friendly event offers relay races, dogstacles, and pageants for four-legged friends, as well entertainment for humans and other visitors. You can browse the market stalls that sell treats for people and dogs, as well as the special promotions offered by the Embassy Gardens businesses.

The event is held in association with animal charities Wild at Heart Foundation and PAAW House, and includes the PAAWstival Awards 2022 — enter your favourite photo of your dog in one of six categories, for a chance at winning the £1,000 top prize.

PHOTOGRAPHY-WORKSHOP For a photoshoot, join Joseph O’Sullivan as Photographer-in-Residence street photography workshop Montcalm East Hotel near Old Street. You will begin at the hotel’s photographic studio. Then, you’ll head out on the streets of East London to master different techniques and capture some images under O’Sullivan’s expert guidance. 10am-1pm

WANSTEAD VINTAGE Wanstead United Reformed Church will be the location Wanstead VintageThe fair features stallholders selling vintage and antique items, from the 1800s to 1990. Look out designer fashion from the likes of Chanel and Hermes, jewellery from classic makes such as Monet and Oscar de la Renta, silver cutlery and object d’art, furniture, iconic posters, pictures, lighting and more. 10.30am-4.30pm

CRAFTY FOX Shop handmade homeware, hand-crafted ceramics and fashion as well as unique artwork and organic skincare. Crafty Fox Market Mercato Metropolitano is taken over for the first fall event. Each of the 30 vendors have been carefully selected for this event. The venue also features a food court, which means you can enjoy delicious refreshments while shopping. FREE, 11am-5pm

VINTAGE KILO SALE Are you a fan of vintage style? Bag it by the kilo — literally — at Peckham Vintage Kilo Sale, where you pay for your chosen goods by weight (£20 per kilo). You can fill your bag with clothes and then bring it to the weigh-in counter. You don’t have to be a certain weight so it is possible to get new clothes for a small amount of money. 11am-5pm

COMMUNITY SALE: Japanese retail company Muji hosts a community market Angel Central Piazza provides a platform for local artists and suppliers to showcase their products and receive 100% of all sales. There are many items for sale, including fresh vegetables, Japanese breads, art and craft, clothing, homewares, toys, and even origami classes. FREE, 11am-5pm

CONFERENCE OF INTERESTING CONTENTS: An afternoon of short talks about ‘interesting stuff’ will be offered. the Interesting Conference Conway Hall. The topics range from long grief to lawn bowling, through Charles Darwin and “Detroit On Thames”. Intriguing. It is intriguing. on Twitter. 12.30pm-4pm

LAUREL AND HARDY SOCIIETY: The meeting of the quarterly Laurel and Hardy Society The screening will take place in Kennington at the Cinema Museum. Members are invited to pay a small fee and view Should Married Men go Home? (1928); The Laurel-Hardy Murder Case ( 1930); Come Clean (311); Scram! (1932); Pack up Your Troubles (1932); 3pm

ATTENBOROUGH, HIS ANIMALS AND ATTENBOROUGH: Last Chance to See Attenborough and his Animals Wilton’s Music Hall. Family-friendly, the stage show features clowning mixed with physical theatre. The two performers will bring to life some of the animals featured in David Attenborough documentary. 3pm/7.30pm

JAWBONE: This book will be published in conjunction with Jawbone’s new photo book Jawbone: The autobiography and film of Jawbone. BFI screens 2016 film JawboneThis film tells the story of a former Junior Boxing Champion who decides to return to his childhood boxing club to fight and train again. Writer-actor Johnny Harris, actors Michael Smiley and Ray Winstone and director Thomas Napper take part in a Q&A at this screening event too. 6pm

BRITANICK: Comedy duo  Nick Kocher and Brian McElhaney — together known as BriTANick — appear at Soho Theatre. It’s the London debut for the Emmy-nominated writers for Saturday Night Live and It’s Always Sunny In Philadelphia, so we’re not sure what to expect — but their online videos have had 50 million views and their New York and LA shows always sell out, so worth a punt we reckon. 8.45pm

BEETHOVEN: Pianist Sir András Schiff comes to the Albert hall to perform Beethoven’s final three sonatas As we know, it’s No. Prom. 11.30am

DIVERSE SPITALFIELDS: Get involved as an author Londonist contributor David Fathers a walking tour of Diverse SpitalfieldsTying in with Diverse London, You can learn about the different types of migrants that have moved into the region over the past 300-years. Visit the sites of former silk weaving Huguenots homes, shops, and ghost signs to find clues as to their identities. 12pm-2.30pm

TIM PEAKE Astronaut Tim Peake The London Palladium hosts a talk by him about 2015, when he was the first British astronaut who visited the International Space Station in order to perform a spacewalk from Earth orbit. Also, he shows photographs and footage never before seen of his life and shares what it is like to be an astronaut. 2pm

THE HOOTERS COMEDY Nope, nothing to do with *that* Hooters — this early evening show at 2Northdown This quadruple bill features four acts of hot stand-up, including finalist for Leicester Square New Comedy Of The Year 2021 Karen Hobbs and Kate Norris. Norris and Parker are 50%. 6pm

EDWARD ENNINFUL Southbank Centre will host an evening with fashion designers to end your week. British Vogue editor-in-chief Edward EnninfulIn conversation with Michaela Coel. Enninful talks about his struggle to break into fashion as a Black, Gay, Working Class Refugee. He also discusses how Vogue is changing by including civil rights activists, first responders and octogenarians on its cover. 7.30pm