Growing anger over use of moko, mataora in image filters: ‘That’s a mockery’ 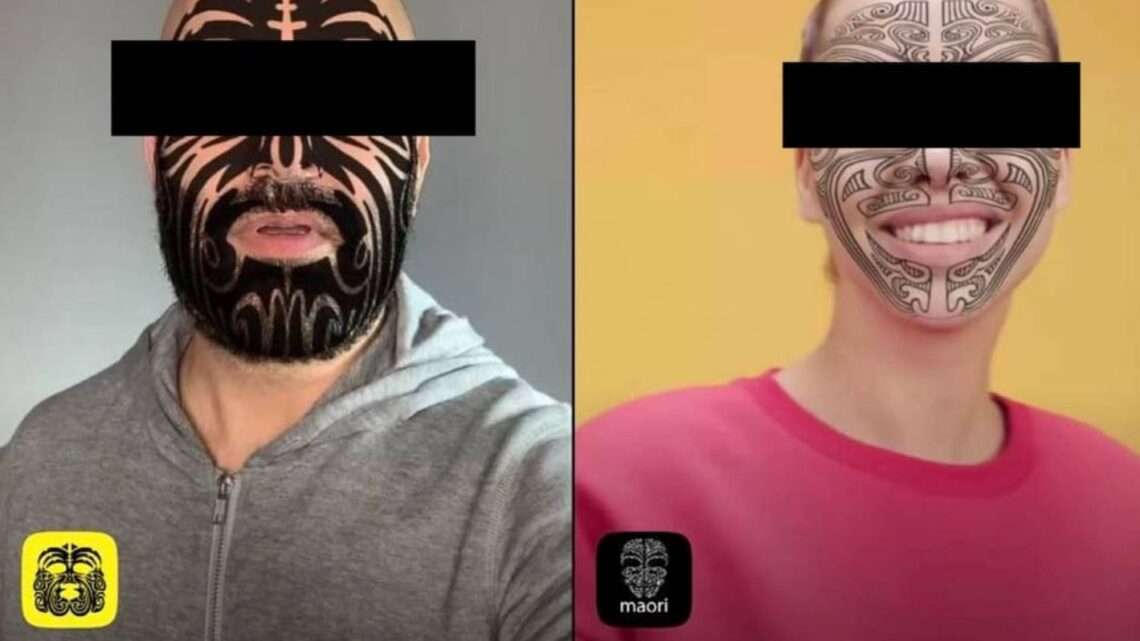 A proliferation of social media filters that allow users to project mataora, moko kauae and other taonga onto their faces has raised fresh concern about the protection of Māori identity and intellectual property.

To some, easy access to Māori culture has been touted as a positive, a helping lens to the revitalisation of mātauranga Māori.

But takatāpui Māori activist Mandeno Karu Martin, who has come across several of the filters, said it was also damaging – especially if created from a non-Māori point of view.

It’s easy to spot a counterfeit Gucci or Prada bag when people see it. However, when tauiwi create Māori art for profit, everyone thinks it’s great.

“There are people who need to take responsibility when they are using Māori culture in an international space or platform to understand that they have consequences and ramifications.”

Snapchat’s animated filters are made with open-source Looksery software, which allows real-time facial modifications to photos.

You can create lenses by anyone. They are openly shared across Instagram. The same applies to Instagram filters.

To Māori, moko and tatau are unique expressions of whakapapa and identity. They’re ancient symbols tied to genealogy, with patterns that vary from hapū to hapū.

These elements are closely connected to our whakapapa and atua as well as our being.

You are stealing from cultures without their permission, misrepresenting them, or preventing those cultures from using the things they have, you are appropriating.

In this case, anyone – Māori or Pākehā, local or abroad – is able to create and wear a mataora or moko kauae through a single pattern projected through a social media lens.

“That’s a mockery of my tīpuna that you’re wearing on your face, just so you can have your two seconds of fun.

It’s a reminder to me that people will look at me differently if that is on my face.”

Moko has become a subject of increasing concern due to its commercialization and appropriation. The sequel to Avatar was criticized earlier this year for the way it depicted moko in its characters.

Māori musician Tūranga Morgan-Edmonds, who plays bass for metal band Alien Weaponry and who got his mataora last year, said he is weary of the commercialisation of moko.

It’s made by someone else to provide the mass that doesn’t fit our culture.

These games have blatantly copied the designs of the originals.

“Places which take inspiration have used the concepts to create completely new things.”

While the issue of appropriation in Snapchat and Instagram filters may be new, concerns about the mass appropriation of Māori taonga and the lack of protections for it have been raised for years, as well as the lack of urgency taken by the Crown to resolve issues of Māori intellectual property.

In 1991, Māori leaders filed a claim with the Waitangi Tribunal, known as Wai 262.

“What had been ongoing abuse and misuse of taonga such as the haka, Māori design, and putting Māori faces on tea towels at the time, and so on,” one of the lawyers who drafted the claim, the late Moana Jackson, told RNZ in 2011.

“It is a matter of protecting some art expressions’ sanctity. It’s a case of “Why don’t we talk to those to whom this belongs?”

The Tribunal took twenty years to publish a report called Ko Aotearoa Tenei. which recommended the Government establish a new commission to protect Māori cultural works from unauthorised commercial use.

The Crown took eight more years to reply, and only in this year was specific funding available to implement the recommendations.

Mandeno Karu Martin said the Wai 262 process remained a slow burning process, but said that immediate action could take away from the hurt that widespread cultural appropriation, which goes beyond filters, has been inflicted on Māori communities across the motu for decades.

Our lives depend on immediate results and need to discuss the consequences for native cultures.

Wanting to fix things immediately for such issues ignores the fact there are mamae and intergenerational trauma.

Snapchat removed all filters after being approached by RNZ to comment.

While the company has not provided a statement about their company, any lenses can be submitted to review using our in-app reporting tools.

Meta, the owner of Instagram, didn’t respond to our deadline.