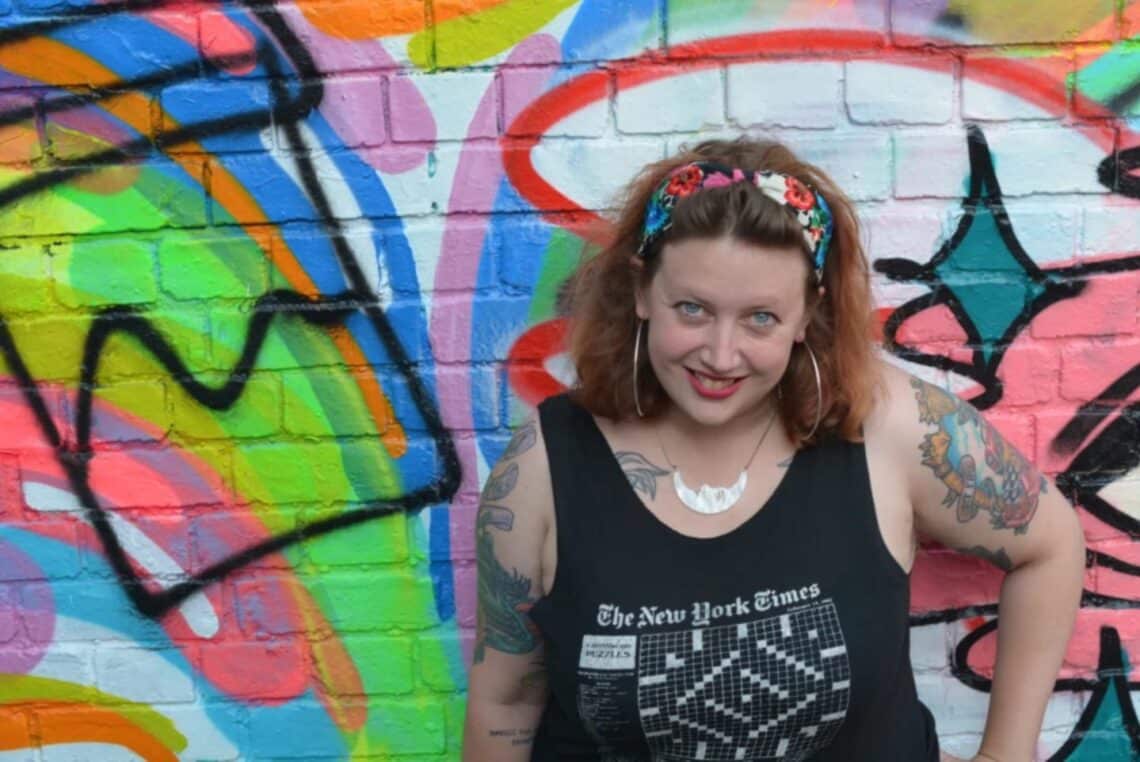 However, this ink can be used on more than one page.

It is in her blood, literally, and displayed on her body – the body she was once ashamed of. Ink, she claims, saved her.

As a teenager Askew, now 36, was embarrassed by her 5ft 11in frame and painfully impacted by the willowy supermodels of the time, and “fat-shaming” magazine headlines. She fell into a series of starvation diets and “disordered eating”.

The writer, who grew up in the Scottish Borders, says: “I have always been someone who has had body image issues. When I was a teenager, my eating disorder led to extensive weight gain.

“I have spent a lot of time puzzling about why I felt this way, because I come from a family of strong women. I had good role models around me as a teenager who all would have said, ‘do what you want, eat what you want.’ But I have been 5ft 11in tall since I was 12. My peers were able to see that I stood out from the rest and that made me aware of my differences. It felt like I was too big and occupied a lot of space. I wish I could be petite and thin. I tried a lot of silly diets – celebrity diets.

“It was the Kate Moss era. The magazines featured so much body shame and cover photos of someone completely normal, in a bikini, on the beach. I was very aware of that.”

Things began to change, she says, when she first went under the tattoo artist’s pen at the age of 21.

She recalls: “I was on holiday in Victoria, Canada, with my then-boyfriend, who had tattoos. It was his intention to get another, which I have always wanted to do. When we walked into the studio they said the guest artist was free, so I just did it – a pair of little flowers with faces inside them; a cute, appropriate first tattoo. It was the best thing I had ever done. I thought of other things meaningful to me that I could put somewhere.”

Many have followed, with the latest being during the pandemic. The tattoo is located just above the tribute to Alan Robinson, her Spitfire engineer grandfather. And she vows not to stop until her entire body is covered: “Having tattoos feels like a way I can reclaim my body. Although it sounds dramatic, I hated my upper arms. I couldn’t wear sleeves and would not have a shirt. These days, I’m proud to have large half-sleeve tattoos across my upper arms. They are now works of art. It’s been liberating and empowering in a way I had never imagined.

“I got one last week. I am still going, and I will probably keep going until I am completely covered.”

Askew’s teenage experience bled into the creation of the lead character in her hit series, DI Helen Birch, who would not be a super-slick, pin-up protagonist but rather “an ordinary woman with a hard job” who “eats Chinese takeaway and drinks wine”.

“It has been very important to write Helen Birch as a character who lives her life in a normal way, to not make her super glamorous or too much of an aspirational, model person,” says Askew. “I want her to be like anybody, partly because, growing up, I was aware of all these strange models of femininity that were floating around.”

This aesthetic resonates with readers especially among women. All The Hidden Truths by DI Birch, the first DI book, was awarded the Lucy Cavendish fiction Prize and was Crime debut of the Year at Bloody Scotland.

Her fourth, A Matter of Time – a tense hostage thriller with its roots in the devastating foot and mouth outbreak of 2001 – was longlisted for this year’s prestigious McIlvanney Prize. Askew has also twice been in the running for the coveted Crime Writers’ Association Dagger Award.

Birch’s latest novel is set in Borders. Askew, who will be present for Bloody Scotland’s 10th anniversary celebrations in Stirling this week, explains: “It takes place over the course of 24 hours and at the start Helen Birch thinks she is having the day off. She discovers that the Scottish Borders are in a state emergency within an hour.

“Shots have been fired at the Border Union Show and the gunman is on the run. He is found by police in an abandoned farmhouse. A hostage has been taken from him and he is desperate to talk with DI Birch. It’s not known why DI Birch is his only option. “The man at the centre of it all is someone who was caught up in the foot and mouth outbreak. He is living with the weight of unaddressed trauma from that time that has come to a head, and that is what Birch is having to draw out in this negotiation.”

Askew often gets asked about her role in Birch. The character is, according to Askew, the kind of woman she aspires to be and hopes is an antidote to a recent wave of “too perfect” female protagonists. “People ask me a lot if she is me, and that is very flattering, because she is the sort of person I would like to be,” she says. “She is much stronger, braver and more sensible than I am.

“In crime fiction, you get a lot of male maverick characters who don’t care about the rules and who do quite dodgy things in the name of getting the job done. A new wave of crime writing has seen female characters in the center. You get female criminal protagonists that are 10 steps ahead than their male colleagues, and they excel at their jobs so much, they almost feel like super heroes.

“I wanted to avoid that strong female character stereotype; that Birch would be that unbearably brilliant woman. Her flaws were what I was trying to show her. Although she’s very skilled at what she does, her mistakes are not uncommon.

Askew is a former Edinburgh College English teacher who was also writer in residence at Edinburgh University. She continues to live in Cumbria because she wanted to be near her parents Chris (63) and John (65), during the pandemic.

Cover Your Tracks was her third book. She published it during the strange time when all seemed to have stopped. She said: “In a weird way, it was meditative but in the background there was the stress of, ‘how bad is this going to get, am I going to get it, is someone I know going to get it?’ I was afraid for my mum and dad. I didn’t know where the world was going.”

Love came with lockdown. Al Smith, a 40-year-old network engineer and fan of crime fiction, became her partner online when Covid restrictions made it impossible for them to travel together. “Al lives in West Yorkshire, so we have a bit of a long-distance thing going on. Five more months were needed before we finally met. After we met, it was only possible to go for a short walk. It was April the following year before we had our first kiss.”

Of course, when lockdown came to an end, she marked it in the same way she does every milestone – with a tattoo. “My mum’s side of the family are Clan Armstrong from the Canobie area of Dumfries and Galloway,” explains Askew. “Their motto is Invictus Maneo, which means ‘I remain unvanquished’. It’s a cool, badass family motto. So last week I went and got it tattooed on my shoulder.”

For 20 years, foot and mouth

Claire Askew wrote A Matter Of Time when the Covid crisis hit in 2020.

She recalled: “The book is about the foot and mouth crisis, so it was very odd that I found myself in the middle of pandemic, writing about an epidemic. It was strange how the two coalesced.”

In 2001, the UK was hit hard by foot-and-mouth disease. This put agriculture and tourism in serious danger. The disease was found in 2,000 farms. In an attempt to stop the spread of the disease, more than 6 million sheep and cows were slaughtered.

Askew says: “As a teenager, I worked on a sheep farm in the Bowmont Valley during lambing season. The animals were my closest friend. I wasn’t a farmer but because I worked on a farm, I felt the anguish.

“It was one of the most disturbing and traumatic things I had experienced – living in that community and hearing from people that I knew whose entire livelihoods were gone because their herds had been slaughtered.

“I carried that experience with me and always thought that one day I would do something with it. It would be a story that I wrote.

“The symmetry that came along with Covid was very strange and it did help fuel the writing. This thing that happened 20 years ago suddenly felt more timely and relevant now.”

Claire Askew will be appearing at Bloody Scotland Friday. Take a look at these photos bloodyscotland.com for details. Hodder published A Matter Of Time