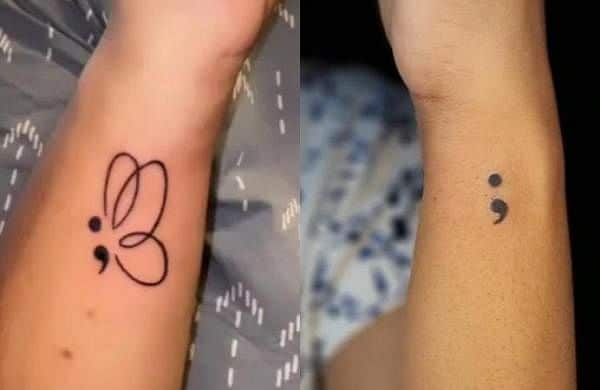 Did you know that tattooing a semicolon (“;”) on your body can help prevent suicide?

Amy Bleuel of the US popularized the anti-suicide initiative “semicolon tattoo.” She suffered from depression, addiction and other difficult circumstances. She wanted something to commemorate her survival from rape and losing her father to suicide. Thus, in 2013, Bleuel found the faith-based nonprofit Project Semicolon, which had a semicolon as its symbol because it is “used when an author could have chosen to end their sentence but chose not to. Your sentence and you are the author.

This anti-suicide campaign was created to inspire anyone going through similar experiences to draw a semicolon anywhere on their bodies, take a photo, and then share the image online. The tattoo aims to break down the stigma surrounding suicide.

This project or movement, which aims to spread awareness relating to mental health issues and also aims to help those who are suffering from depression, suicidal tendencies and so on, has crossed the seas and reached India too after it was conceived in Wisconsin.

Lakshmi Vijayakumar is a psychiatrist and WHO consultant. She founded the Sneha Suicide Prevention Centre. Dr. Lakshmi Vijayakumar says the idea of this tattoo was popularized by people who have lived their lives. The emblem of World Suicide Prevention Day, which can be inked in colors orange or yellow by people has become more common. However, the semicolon is what she mentioned.

Gabriella Symss (post-graduate student at St. Joseph’s University in Bangalore) said that her semicolon tattoo was made possible by Project Semicolon. He was raising awareness for mental health, and encouraged me get my semicolon tattoo free of charge. The initiative was very supportive, and I decided that I would get one.

Additionally, she stated that her tattoo serves as a reminder about how far she’s come. This tattoo also reminds of English grammar, which she is passionate about.

I have tried suicide seven times since age 12 Things got worse when I turned 16 and started to have suicidal thoughts. Maria Elizabeth Bino from Bangalore, who is a home-baker and student of architecture said that she got the semicolon ink as a sign to comfort her and give them reassurance it’s okay not be okay.

World Suicide Prevention Day’s 2018 theme was “Creating Hope Through Action”, which serves as an encouragement that there are other ways to live than taking your life.

Nimisha, a student studying MSc Psychology at Mount Carmel College Bengaluru says her semicolon is in honor of her best friend and to help others in need.

“I have always loved tattoo artists and anyone who gets inked. Project Semicolon was something I came across and I immediately understood how important it is to spread awareness on mental health. Iswarya Lekshmi is a Brand Comm executive and a PR professional based out of Bangalore.

Talking to experts provided a wealth of information. According to my experiences, no one has ever spoken of the symbol to me or had it tattooed on them. Subikshalakshmi, an assistant professor at St. Joseph’s University, Bangalore, said that he has come across individuals who have the symbol on tags, tshirts, and inking. The purpose is to raise awareness about suicide prevention.

A number of tattoo artists provided their opinions on the matter. We ink many semicolons. This raises awareness about mental health and is important because not everyone talks openly about it. This tattoo serves as an opening point to people who want to have a dialogue,” Akil Anand of Skin Deep Tattoo Studio, Indiranagar in Bangalore said.

His tattoo aims to inspire people to live despite the hardships or challenges they face.

Krish, founder and owner of Inkpulse Tattoo Studio says the semicolon is a popular design for many reasons. He said, “We ink at most one tattoo per week using this design for clients.”

Inkpulse operates two offices, one in Coimbatore, the other is in Chennai.

Ivan Toney's amazing tattoos, including family portraits, his squad number, Heath Ledger as The Joker and a cute kitten