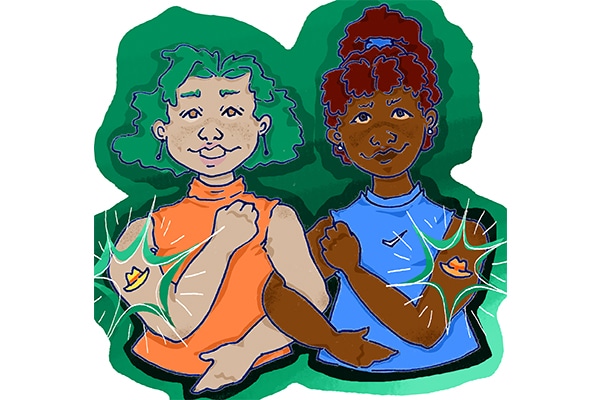 Tasha Anslyn holds her right hand up to the heavens, her palm pointing towards the sky.

“I love … seeing a design and creating an entire storyline,” said Anslyn, a neuroscience and speech, language and hearing sciences fifth-year. “For this little Asian woman that’s (now) on my arm, I just imagined her to be carefree, happy (and) very in touch with herself.”

Anslyn was adopted from China as a child and grew up in America. She felt disconnected from her culture. Anslyn said that she is happy with her tattoo, which serves as an homage and tribute to her heritage.

“This (design) was the most impactful to me because of the expression on the woman’s face and the fact that she was clearly of Asian descent,” Anslyn said. “(This tattoo) was a little way to show that pride from my background without necessarily having the most familiarity with my culture.”

Anslyn stated that she had gotten a tattoo in spur of the moment with her brother, and one with her best friend. These tattoos were a combination of younger versions. Anslyn says that despite having many tattoos she still feels a thrill when the needle touches her skin and covers her body with art.

“(I’m) thinking about the idea and the meaning behind it and the experience itself,” Anslyn said. “I forget about how painful it can be after because I romanticize the entire story.”

Anslyn loves getting custom and flash tattoos. However, flash tattoos are something she particularly admires because they allow the artist to show her personal style.

“If I admire a specific artist, I want to be able to use their inspiration and design when I get tattooed by them,” Anslyn said. “(Flash tattoos are) really special and the highest form of flattery.”

“The detail that’s put into every single tattoo, stroke and design is really special (with) this specific tattoo artist,” Anslyn said. “I particularly like this artist because of how their background has influenced their designs and how they use it specifically for sharing more about their personal identity as an Asian American.”

Anslyn stated that, after having tattoos placed in difficult to see places, she decided that this particular design would be prominent enough that it could be easily admired by others.

“I used to be really cautious about how many tattoos I had and how visible they were,” Anslyn said. “Now, I just really love the idea of having art on my body as a tattoo and seeing it in others.”