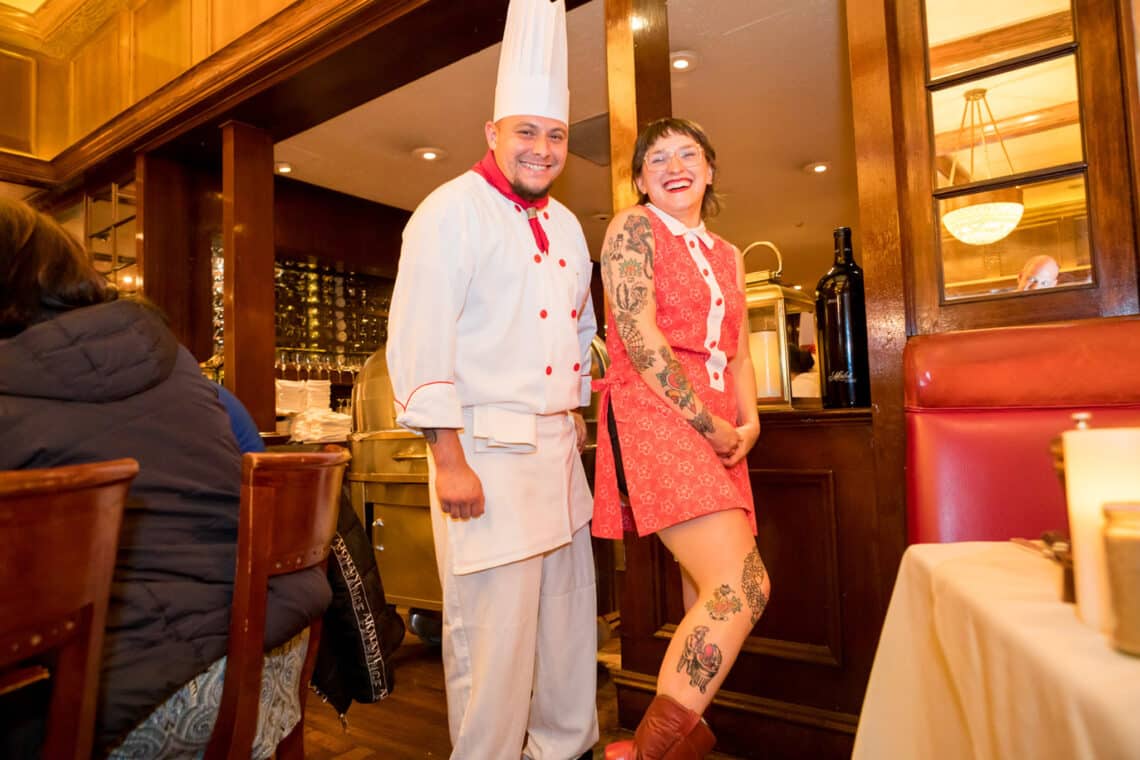 For many, San Francisco’s food is just as iconic as images of the Golden Gate Bridge. From memories of fresh-cracked Dungeness crab by the ocean to tearing off a piece of warm sourdough from Boudin, the flavors of the city are lasting, even if some are long gone.

For San Franciscans like Kelsey Kowalski, 26, restaurants such as the House of Prime Rib rekindle some of her fondest food memories.

“I’ve been to the House of Prime Rib three times in less than a year. Once I went, I was like, this is it. This is perfect,” Kowalski said. “I grew up eating prime rib for Christmas — like I love prime rib. That was always what we had on the table for dinner, so I think there’s definitely a nostalgic thing to that for me.”

She said she’s “obsessed” with HOPR so much, in fact, that just weeks ago she went all-in and got a tattoo of its logo depicting a well-dressed meat carver wearing a tall chef’s hat slicing up thick pieces of roast from the restaurant’s iconic silver pushcarts.

It’s a cute, traditional-style tattoo that kisses the side of her right calf, and one that left HOPR owner Joe Betz speechless when she walked into dinner one Monday night.

“I couldn’t believe it,” Betz said, with a laugh. “I went over to the party and, I mean, it’s a tattoo. So I was speechless. … I thought I saw it all, but there’s always tomorrow.”

Betz’s staff took a photo of Kowalski’s permanent homage to her favorite restaurant and shared it with HOPR’s almost 14,000 Instagram followers, who were overall delighted to see such a display of city pride. It’s similar to the craze for Casa Sanchez tattoos back in the 1990s in exchange for free tacos for life. Still, the sudden boost of social media attention has left Kowalski tickled; she said she was unsure how the staff would react at first.

“It was so nice. I was so shocked. I was like oh, they’re just going to laugh at me. I was expecting them not to care at all,” she said. “So when they made a big deal about it, I was really surprised and it was awesome. It made me feel so special. I felt like the House of Prime Rib princess or something.”

The girl with the HOPR tattoo

A transplant originally from Sacramento, Kowalski traded in the slower-paced vibes of the state’s capital for the bustling city life and stunning ocean views of San Francisco just over a year ago. Here, she said, she found a sense of kinship among other weirdos, artists and service industry folks.

When she’s not pulling doubles at an Italian restaurant on Mission Street, she’s apprenticing as a tattoo artist, which is how she was introduced to Shanti Seigel, the artist who designed the HOPR tattoo.

Seigel is a born-and-raised San Franciscan who grew up in the Richmond District. During the height of the pandemic, Seigel, who tattoos these days at Haight Ashbury Tattoo, said he was painting and drawing every day and decided to create a flash sheet made up of iconic San Francisco imagery that represented what the city means to him.

HOPR is a restaurant that Seigel, 46, said his family has been visiting once a year since before he was even born. So he took the restaurant’s logo and gave its meat carver some personal touches before adding five other instantly recognizable San Francisco food icons to his collage.

“The other items on that sheet are the Doggie Diner dog, I’m old enough to remember going to the Doggie Diner when I was a kid. And then, Boudin, the sourdough bread company,” he said. “There is also a Dungeness crab, because my grandma used to take me to Fisherman’s Wharf and we’d buy a bunch of crabs and then go back home and just crack them on her dining room table and just eat all the crab we could.”

There’s also a sweet, black-and-white portrait of Mary See of See’s Candy, which had 18 candy shops in the Bay Area by 1939. The last image on Seigel’s flash sheet belongs to a mint-colored It’s-It ice cream cookie sandwich dripping with chocolate.

“I picked all things that really mean a lot to me and also things that I would actually get tattooed on myself,” he said.

Memorializing the tastes of San Francisco

Although he doesn’t have any SF food-related tattoos on his body yet, Seigel said he was stoked to tattoo his HOPR design on Kowalski because he knows she loves the restaurant so much.

He recalls missing the tastes of San Francisco most while he was living in New York during the late ’90s to early aughts. Seigel said whenever he visited friends and family on the West Coast, he’d stop by all of his favorite places before heading back east.

“I would stop and get a box of See’s Candy and a loaf of sourdough bread and then I would go to the Mission to go get a burrito,” he said. “At least twice, I also went to Fisherman’s Wharf and got frozen crabs and had them pack it full of ice inside a plastic bag with duct tape.”

Now, as he walks San Francisco’s familiar streets, he said he longs for restaurants that are long gone, such as Louis’ down by the Cliff House, and Ton Kiang, a former Chinese restaurant on Geary that he and his family frequented during his childhood.

With losses like those, he said it was an honor to tattoo his HOPR rendition on his friend Kowalski. It’s a living testament to what these historic spaces mean to so many and the countless memories they hold for all who walk through its doors.

Scenes from a Friday night inside House of Prime Rib. (Images by Douglas Zimmerman and Patricia Chang)

What San Francisco means to the people who live and frequent the city varies in degree similar to one’s opinions on where to grab the best dim sum. But there’s no question that restaurants are beloved landmarks.