A Bridezilla Made Her Guests Cover Tattoos and Dye Their Hair 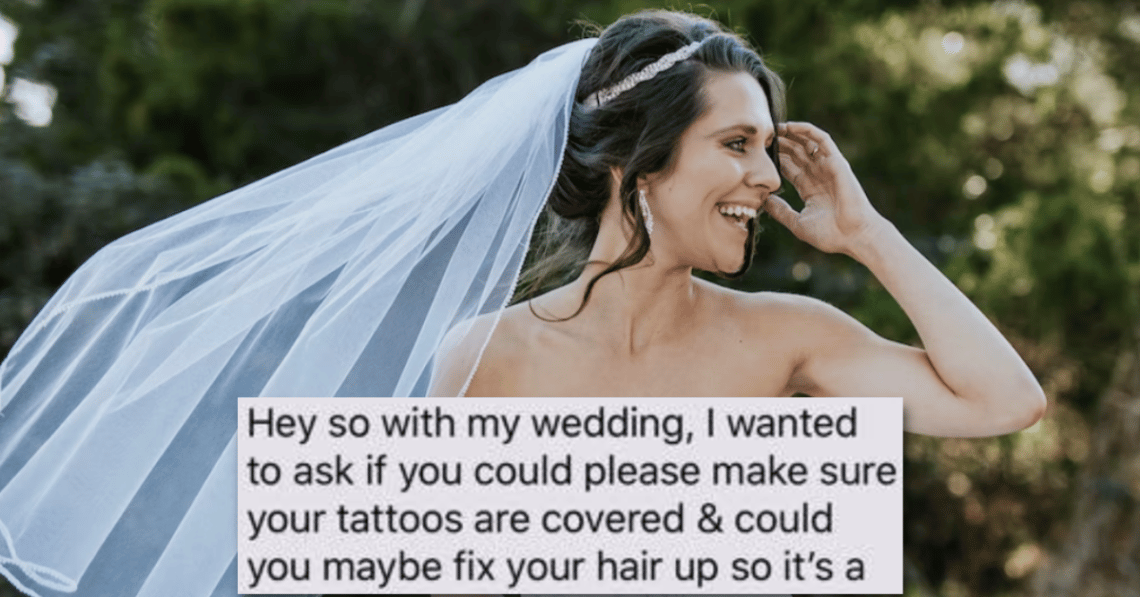 Weddings are a celebration of love and union. It is a special moment to be together with families on the happy ever after day.

Except when it’s not. There are copious amounts of stories about how some brides take “their day” to the ultimate extreme. The best story of all?

One of our wedding guests (a friend of the groom), posted her Bridezilla Attack in a group on Facebook. It went viral! The bride (who remains anonymous) asked her to cover her tattoos and dye her hair because they “clash with the wedding theme”. You’re kidding me?

“Shaming this bride to be. This girl is a great friend. I was originally friends with her fiancé & when she and him got together my partner and I were not fans of her. But she is usually pretty sweet and makes him super happy so we made an effort to like her & become good friends. She has been kind of challenging at times but mostly we’ve gotten along.

They’re getting married in December and she’s just texted me this. I have tattoos down both my arms to my wrists – the venue is outdoors and in the hottest part of the year and she expects me to wear a long sleeved dress or a jacket? Not to mention dye my godd**n hair.”

The sudden attack on the guest is a strange one. Perhaps the bride’s got some brewing jealousy for her.

“She mentions me texting her fiancé because anytime I text him about plans she gets super p**sed and claims I’m trying to cut her out – even though they’re both always invited.

Edit: I haven’t told the fiancé yet, but we are seeing them in two weeks so I’ll bring it up in person, just trying to avoid making things worse by texting him 🙄”

Did the text contain any important information? Take a gander…

A guest makes a positive point.

Summer isn’t made for long sleeves! Keep in mind that this groom’s friend is It is not In the wedding reception.

Wow! This bride is completely unfeeling for others. 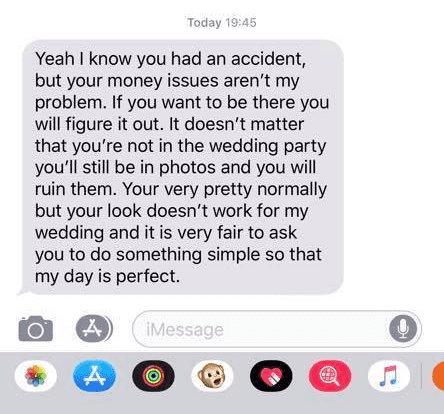 And the bride could care less about her guest’s financial setback. It’s all about the wedding and “how it looks.” This bridezilla has her priorities misaligned!

But this isn’t the end of it. Blue-haired guests to the wedding received some interesting updates from their groom. Ouch.

I’m sorry it took so much time, but the past two days have been crazy with family and personal stuff. I am writing this right before bed so if I don’t answer any questions I’m probably asleep lol.

Then I called [Groom] on Saturday & asked about catching up. It was very strange and vague. I thought that he had read the post.😂

He texted me about an hour later and requested a beer. He and I (my partner was also there), so no [Bride]

So we met up last night and HOLY S**T [Bride] – but there are kind of reasons.

So [Groom] asks me if I’ve spoken to her lately and I just decide to dive straight in and tell him about the texts. He should see them. And he says he thought I must’ve gotten something because she has been sending crazy af demands to basically everyone. These are some of the most terrible.

[Groom] had no idea about any of these until his mother called him furious about the hair thing on Thursday & he discovered all the other crazy s**t she had said. You could add more, but those were the most important.

[Groom] isn’t going to dump her, apparently she’s had some issues with her family (I’m not going to say what cause it would be really uncool to share her private family matters) and he thinks that’s the cause of this sudden unreasonableness. After being on top of her game, suddenly she sent out all the stuff. The couple are now considering delaying the wedding.

While it is not acceptable for her to behave rudely, it can make sense because she was just being ridiculous. Poor [Groom] has been trying to patch things over since finding out & trying to avoid having half his friends and family cut them out.

[Groom] does want to have her apologise to everyone but she’s still in a bad place & isn’t going to be doing that yet at least.

It’s a definite yes. I mean I feel bad that she’s having a hard time but also man holy fuck poor every person who has been on the receiving end of this stuff.

I did tell him about the post and the articles about it but honestly I don’t think he really cared, he just wanted to drink and talk. But he’ll tell her & I said if she wants to talk to me about it she can.
——————————————————————-
Minor Update: Okay so no she hasn’t seen this yet 😬 I am going to try and reach out the the fiancé today instead of waiting two weeks just because this has spread more than I anticipated lol. I will update after I talk to him or with anything else lol.”

Oh no she didn’t! Is she telling her MOH to trim her hair? And that only “good children” are invited? Ok, okay, it’s true, we understand that the bride is experiencing family problems, but still, wow.

They lit up the Facebook group with their views.

You can’t blame them.

And then there was the other side…