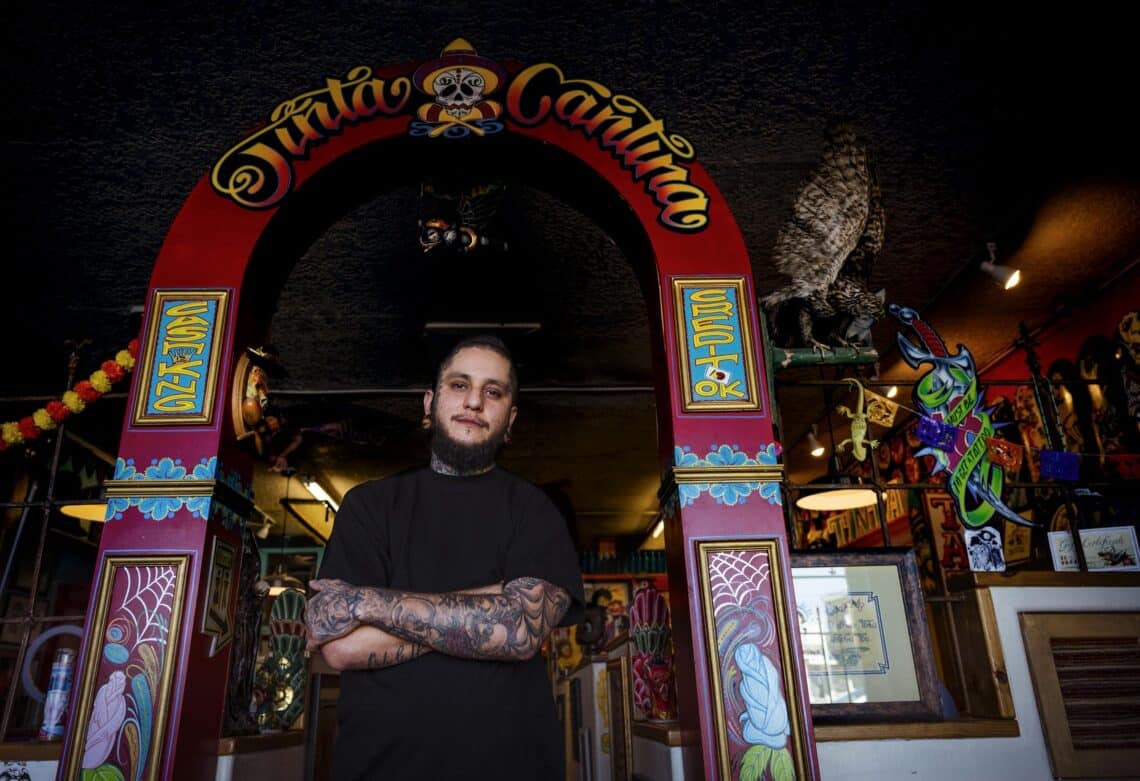 Trust. On the surface, we’re losing it. Many people have lost faith and trust in their government, friends, families, other humans, God, or even God.

If you are open to letting go of stigma and trust, there’s a little bit of hope every day.

Michael Roybal, a tattoo artist, has dedicated his life to acceptance and trust through an art form that is often misunderstood.

The assuring scent of cleanliness freshened the parlor’s air as the purr of the needle inched closer to the bare skin of the client, her arm stretched long toward Roybal’s steady hands. As the needle pulsed, punctured, shades of green and blue radiated from the black, the trust between client and artist was never broken. This is proven by the permanent sleeves and hidden etchings which took almost a decade. That’s longer than some officials’ tenures in public office, or a person’s stint with their primary care physician or even some friendships.

Roybal has always aspired for the role of artist from a young age. He was born and raised in Las Vegas. As he studied at Highlands University, he began to run errands for the tattoo shop and do various grunt jobs.

The owner eventually suggested that he learn to tattoo.

“When I started learning how to tattoo, I realized that the way I drew and the way I did my art was gonna be a lot different,” Roybal said. “There’s a lot more that goes into it.”

Tattooing is a viable career option for artists in an industry that promotes growth; some artists making six-figure annual salaries – which is only achievable through hard work and devotion.

Tattoo artists need to be business savvy, patient, confident, trustworthy, intuitive to a client’s character and committed to advance in the field. Roybal said “you never stop learning” as a tattoo artist

“It really is a lot of hard work, but it can take you all over the world,” he said. “It’s more like … do you really want this lifestyle? Because if you don’t, it’s gonna eat you alive.”

Next May will mark Roybal’s 10th year as a licensed tattoo artist in New Mexico.

Roybal’s abilities are vast and his style broad. He’s able to create original pieces, cover up old tattoos without leaving a memory in sight, or touch up aged art to make it pop. Known for his color schemes, he’s an expert at blending standard hues to create striking tints and vivid detailed work, but is also capable of executing intricate tribal designs with smooth shading and gradients.

He is Hispanic and understands that Hispanic culture can be very dark and gritty. However, he enjoys expanding his creativity and embraces the challenges. He is known for his openness and flexibility, which has helped him to build loyal customers.

“You have to take so many different things into consideration when finding a design. One thing, first and foremost, is the flow of the body and the shape of the body … everyone’s body is different,” Roybal said.

The tattoo artist works with an ever-changing canvas. Every breath has an impact on the world. A sneeze or cough can change the course of the needle. It’s an important decision on what someone wants to permanently stamp on their skin, and they’re putting the fate of their appearance in the steady hands of a tattoo artist.

“I try to do my best job on every single tattoo … and make sure it’s going to stand the test of time,” Roybal said. “I just approach it that way, try to be humble about it. I don’t like to judge people by their ideas.”

People are tattoo artists’ walking portfolios, and their gallery has no borders or admission. For maintaining a positive reputation, it is important to feel under pressure to produce quality work.

Roybal has expressed his desire to one day be tattooed, and his style is quite bold. He has tattoos all over his body, but his face is not allowed. It’s his way to not only express himself, but showcase the work of great artists he admires.

But his appearance is a head turner, and the issue of acceptance has fluctuated over time.

One of the first things to associate with pain was the sound of a tattoo needle. The walls of parlors full of profane imagery and vivid wickedness once symbolized bad seeds. All that hum is a victim to the surface judgement. Although tattoos may have machismo or marianismo elements, they are not necessarily aggressive. There’s a lot more to tattoos than what we see in modern culture, just like there’s a lot more to an individual under the ink.

Researchers have determined that the oldest preserved tattoos on human skin belong to Ötzi the Iceman, a man found on the Austrian-Italian border in 1991 who is believed to have lived in 3370-3100 B.C.

She said, “They’ve been high art, and then … relegated to gutter trash, only to be picked up again as high art.”

Hawn explained how tattoos were considered sacred art by different cultures. Others associate tattoos with status or respect. She referenced the Victorian era when royalty would get tattooed to show off their wealth, but when Samuel O’Reilly invented the electric tattoo machine in the late 1800s, it became easier and affordable for average people to get tattoos, and they suddenly lost value in the eyes of high society.

Hawn thinks that art is rising again because technology and ink are improving, increasing complexity and changing perceptions of art.

According to researchers, one third of Americans has at least one tattoo. The stigma around tattoos and the artists is not gone.

Hawn said, “Tattoo artists deserve far more respect, both generally and in the fine art community, because it’s such a hard art to actually practice.”

She added, “It’s always amazed me that tattoo artists have this ability to build almost instantaneous trust with the people that are coming in to get tattooed. … Basically, I’m allowing a stranger to come into my very intimate space … and permanently change my appearance.”

Roybal then applies an ointment that cools and reduces swelling. Within minutes of the session’s beginning, the injury will be healed and pain should subside. However, the art is permanent and your customer is part.

“People right away assume before realizing you’re not a criminal or you’re not the devil,” Roybal said of the attitude shift toward tattoos. “Not everything is as it seems … look a little bit deeper than the surface.”

Doctors, nurses, emergency responders, accountants and financial advisors as well teachers may all have tattoos. These are all people we trust on a daily basis – which is fitting considering a tattoo artist kind of has to be the most trusted artist of all.

You don’t have to go and get a tattoo if you don’t want to, but you also don’t have to judge a book by its cover – especially when we’re all in desperate need of a little trust in one another.