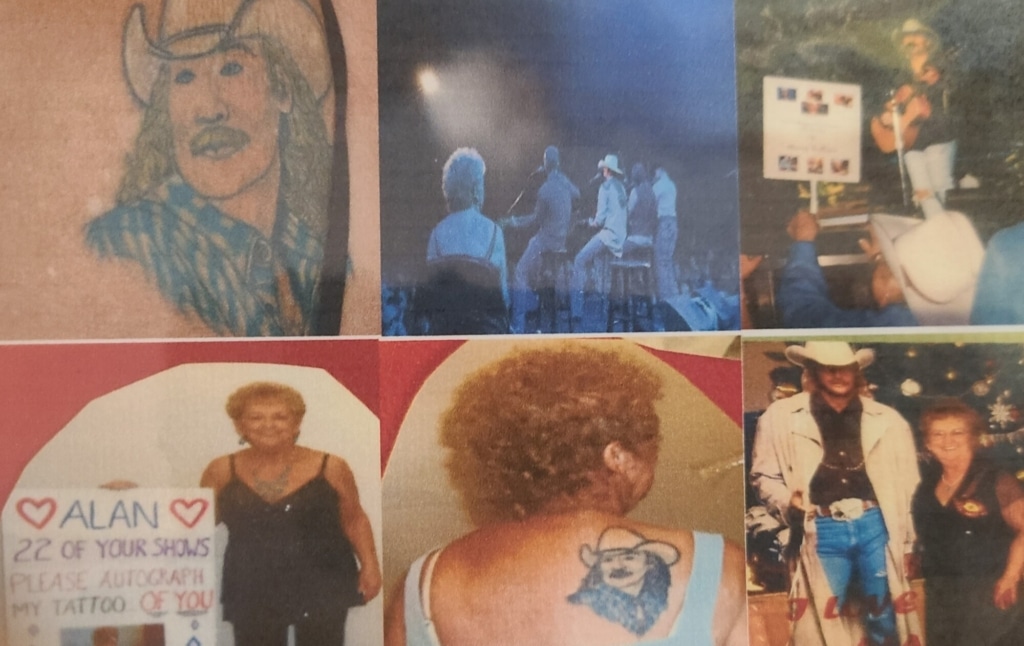 Marie Gallant’s family has taken a photo of her and Alan Jackson. Steve Collins/Sun Journal

Heading to Nashville last week, Sue Castle felt a little nervous about what might happen when she showed up with her mother’s ashes and a plan to spread them somehow at country star Alan Jackson’s Tennessee home.

But it was all good.

Her first morning there, a Maine native who’d become a music producer called her. He’d read a story in the Sun Journal detailing Castle’s hopes for the trip and offered to help.

Then she headed to a four-story bar that Jackson has in Nashville, which doubles as a sort of museum to his career, with the notion of feeling it out about the possibility of showing off a display about her mother Mary Ann “Marie” Gallant’s love for Jackson and his music.

Castle, who hails from Gardiner, began talking to a bartender Tuesday to see if the exhibit could be added to all of the other memorabilia on display at the bar.

In response, the bartender laughed.

“Oh, my God, are you the one?” she asked with excitement.

She’d read the story, too.

Castle was given free drinks. The manager arrived quickly to greet her.

“They already knew I was going to show up,” Castle said. Mary Anne Gallant is photographed in 2014 as she greet friends at Denny’s restaurant in Auburn. Her daughter plans to spread her ashes on the grounds of Alan Jackson’s home in Nashville. Daryn Slover/Sun Journal file

Jackson, according to her manager, had also read the news article. He said the singer remembered Gallant, with whom he’d danced on stage in Portland and hailed the tattoo of him on her back.

Jackson told the manager that Gallant was “a sweet lady,” the manager told Castle, whose trepidations had been transformed into joy at the reception she was getting.

Over the course of the next few hours, she was taken around by the manager, who showed each piece and told her about the history behind it.

“It was awesome,” she said.

They handed her T-shirts another trinkets, she said, and told her she could eat and drink for free at the bar whenever she showed up at AJ’s Good Time Bar on Honky Tonk Highway, just a block from the Ryman Auditorium and the Country Music Hall of Fame.

Castle then looked at the man in his eyes.

Castle asked him if he’d be interested in putting the display she’d made, featuring her mother’s favorite car, a 1965 Mustang, with a tiny figure of Gallant behind the wheel, surrounded by pictures of Jackson and the like.

Likely relieved that she didn’t hand him an urn full of ashes, he promised to put it on display. He initially told her that it might be placed on the second floor. But he said that he would give the piece its own shelf soon.

“It was amazing,” Castle said. “We had a really good time.”

As for the ashes, “we brought ‘em back,” Castle said.

She realized that Jackson has a proclivity for moving around so it’s not even clear where they should be spread anyway.

Instead, Castle’s going to place them on her property and put a bench nearby, a place to think about her fun-loving mother.

What about the journey she made to country music’s heart?

Beyond any expectations, she said, even without dropping her mother’s ashes from a helicopter.

Nashville’s radio station also heard the story about Maine and caught up to her as she was touring the city. They interviewed her about the odyssey.

A cousin from Massachusetts and an aunt in Canada were two of the people who received it on the radio.

The story of her mother, Castle said, “went quite viral.”

She claimed that Gallant would have loved the book, even though he died in December last year.

Castle did, too. She said all the support and attention “helped my heart big time.”

As Jackson once put it in a song, “The sun seemed brighter than it’s ever been/ And now she’s dancing in the wind.”

Check your email for confirmation and to complete your registration.

To reset your password, please use the below form. After you submit your account email, we’ll send you an email with the reset code.