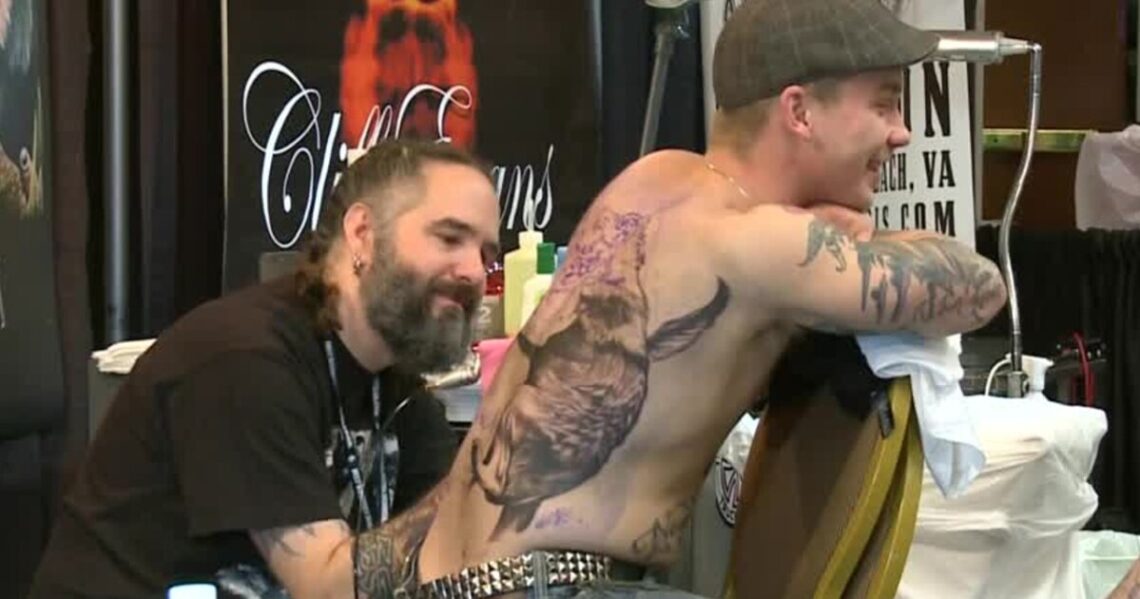 Since 1992, artists from all over have come to Richmond for the longest running tattoo convention in the world, which will celebrate it’s 29th anniversary this weekend.

The River City is actually the third-most tattooed American city. What is the secret to tattoos’ popularity in the River City? And who are some local artists responsible for the ink?

Loose Screw is a place where art and tattooing are at one’s core.

Smith stated, “Anything can make an impact, I try my best to figure it out how to make them work.”

Smith has been tattooing 25 years. Smith began his career at Busch Gardens as a caricature artist. He then realized that he could also create the same effects on humans.

Smith stated that “new school” is the name of tattoos. “In the real world, I think it’s just called, like, cartoons that are really weird and crazy.”

When he opened Loose Screw in 2011, Smith was one of the only “new school” tattoo artists in the world, landing him a spot on season two of Paramount Network’s Ink Master.

“I remember going to a comedy show one time after I’d been on TV, and I had these three grandmas and they’re like, oh my god, we’re such big fans,” Smith laughed. We don’t have tattoos, but we do love your art. So I took pictures with my grandmas. My face was now in front of my artwork, which, you know, the 14 years prior, my face was behind my artwork.”

The veteran tattoo artist takes great pride in providing a platform for newer artists like Jen Bean to show their work and earn a living.

“I always had an interest in like doing something artistic for like a career path,” said Bean. “And, you know, sadly, there aren’t a lot of career paths in art that don’t, you know, have you like starve to death.”

Smith stated that “a lot of the most talented tattoo artists would visit Richmond to share their tips and tricks.” “They would drop off all these amazing tattoos to all the locals, and the locals would walk around to other tattoo shops. The local tattoo shops then saw the great tattoos and began to try making them. And I feel like it just kind of built upon itself.”

The convention has helped establish Richmond’s diverse tattoo scene, with the city averaging 14 shops per 100,000 people. That’s the third most in the country.

Bean laughed, “It’s almost like everybody here has a tattoo these days.” “It almost seems funny that somebody doesn’t have one.”

Smith has two decades’ experience and says that his goal is for tattooing to be a more enjoyable art form. This year, he selected Black Ink’s Melody Mithcell as the convention’s first black female headliner.

He noted that he sees the convention as a place dominated by white people every time he walks in. Richmond has such a diverse and thick scene. Why are we not getting more people like that in the convention?”

Bean said, “It is a wonderful time to be female in the industry.” It’s a great time to be a female tattoo artist. It’s much more common now.

Smith wants you to feel confident in your sleeves, and that you appreciate the hard work involved in creating tattoos and leaving a lasting legacy.

On Friday and Sunday, Richmond Tattoo, Art and Music Festivals will be held at the Doubletree Hotel in Midlothian. The festival will host more than 150 artists representing tattoos from around the globe. More than 4,000 people are expected to attend.

Live music and burlesque acts will be performed, as well as food trucks, free tattoos, and other entertainment. To find out more or get tickets click here