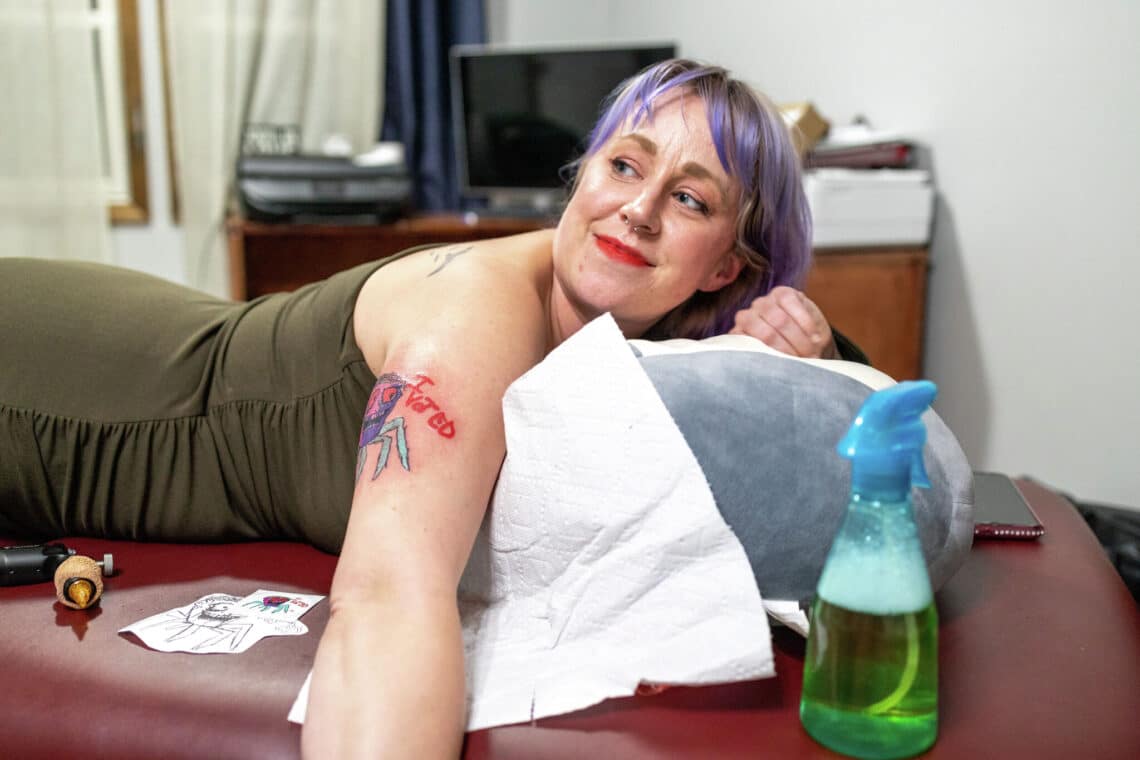 ROSENDALE — As the Hudson Valley barrels toward Election Day on Nov. 8, get-out-the-vote initiatives abound. Lawn signs and fundraisers are ubiquitous, but one of the more unusual initiatives — a tattoo party — took place Friday, Oct. 21 in a private home on Route 32 in Rosendale.

Alex Wojcik was the deputy mayor in New Paltz. Matthew Mackey is currently running for state Assembly District 101. They got I Voted! tattoos. spider creature that won the Ulster County Board of Election’s sticker contest (and many voters’ hearts) earlier this year. Ashley Dittus (the Democratic Board of Elections’ commissioner for Ulster County) watched. It began at 6:30 pm and continued until midnight.

Wojcik announced her intent to have the drawing made into a tattoo via Twitter on July 5. writing “If this wins I’ll get it tattooed on me.” Several days later, Mackey tweeted back, “Alex, I will join you in this tattoo mission!”

“Sometimes I have outbursts,” Wojcik said, referring to her tweet as she settled onto a table to get her tattoo. “But I am a woman of my word!” This was not the first tattoo for either. Mackey views them therapy. He meditates throughout the whole process.

“I love pop culture and significant moments in history. This seemed like the perfect blending of the two,” said Mackey, a social worker who uses the pronouns xe/xem. “The spider is the perfect cultural snapshot of what is going on in politics.”

This is Mackey’s first time running for office, making this tattoo even more significant. “You will always remember — you’re on the ballot this year,” noted Dittus.

Wojcik was the first to go; Jen Metzger, the Ulster County executive candidate was later attending. The timing was tightening as Jen Metzger’s intricate design would take several hours. Dressed in an olive-colored gown with one sleeve and sparkly shoes — an outfit for transitioning from the tattoo parlor to the dance floor — Wojcik clutched Mackey’s granddaughter’s unicorn, Squishmallow, as work began on her right tricep. The large plush toy’s tail and mane matched her signature rainbow hair. Lower on the same arm Wojcik has a tattoo of New York’s 19th Congressional District, which has since been redrawn.

“Here we go!” she said, smiling as the whir of the tattoo machine drowned out music playing off the artist John Romanelli’s phone. Romanelli, who used to own Judge1 Tattoo in Port Ewen, has done several of Mackey’s existing tattoos, but working on a politician was a new experience. Mackey had never shown him the I Voted sticker, but Romanelli loved it immediately.

Romanelli decided to create a 2 1/2 x 3 1/2 inches version of this creature. It was designed by Hudson Rowan (14 years old) of Marbletown. “It will blur out if it’s too small,” he said, filling in black lines for the legs.

Wojcik did not appear to feel any pain. “This is so fun! It’s really fine. It’s easier than knocking on doors and talking to strangers and better than yard signs,” she said. Mackey laughed. Xe wore a pink, short-sleeved shirt that allowed him to access his right forearm. This Xe keeps for historic pop culture tattoos. Mackey’s left arm is for spiritual tattoos.

Watching Wojcik, Mackey said, “We are bonded for life now,” then declared them the “Democracy Spider Squad.”

The evening’s squad would have been larger, but one colleague eager to join wasn’t available. Taylor John Bruck, Ulster County Archivist plans to have his tattoo done in New Orleans on November 6. “This has a voodoo vibe, so it fits with New Orleans and is a fun thing to do on vacation,” he said by phone.

Bruck is the Kingston Democrats treasurer and city historian. He fell in love immediately with the design. “It’s a great visual representation of how many of us are feeling about politics in general now.”

Bruck, who describes himself as “fairly tattooed,” will have the creature placed on the inside of his left ankle (a notoriously painful spot). The creature will measure approximately 2 inches. “I like to leave that up to the artist. I recommend small and they recommend bigger.” He isn’t sure what it will cost, but hopefully not more than $100 to $150. “That’s much cheaper than a mailer,” he noted.

Bruck will not be in the area so Bruck is streaming it live on social media. He’ll also answer questions about possible polling locations. It’s his way to get out the vote. He’s also working to get an I Voted! A sticker was placed in the commemorative time capsule marking the 150th anniversary Kingston. “It will be opened in another 150 years. I think it’s an important part of this year. It’s legendary, an instant classic. It will be the last I Voted! sticker like it,” he said.

Hudson Rowan is an artist who has created a permanent tattoo that voters can keep for a longer time than stickers. website selling T-shirts, hats and more — all adorned with his critter. The price for an organic bucket-hat is $38, while the cost of a fleece zip up hoodie begins at $52.50. Rowan loves the positive reaction from his drawing.

“I think it is awesome that people like my design so much that they want to get it tattooed on themselves,” he said. His father, Tim Rowan, added: “It makes me feel proud as a parent that my son created something that resonates so strongly with people.”

Another non-permanent option is to dress as Rowan’s drawing for Halloween — and maybe Election Day, too. Ashley Dittus will wear the costume throughout early voting at different polling places. Her head was made on FatHead.com. She also had several people help her make pool noodles legs.

“I think doing stuff like this will increase voter turnout a little bit,” said Bruck. “People might go just to get the sticker. That’s democracy; some people are motivated by different things.”