Although tattoos have been considered masculine symbols for centuries, they are now being replaced by more women.

More than 30% of Australian women have at least one tattoo compared to only 19% of men. Feminine tattoos are in high demand.

9Honey spoke to Claire Benson from Sydney, who says that tattoos have become a billion-dollar industry. Claire Benson also explains that the trending feminine tattoos and fine lines are making studios money.

“If you have a female artist who is finely trained, they will pay to work in your studio. This will make your studio very rich.”

Research has also shown that tattoo artists who are female are more successful than those who are male in the US. It is believed that the statistics are similar in Australia.

Benson, who has over 14 years of tattooing experience, charges $350 minimum for a 5 cm tattoo. Benson is usually booked out six months in advance.

Benson says, “I make very, very high money as a tattooist, I would be pushing 6 figures now each year,” and adds that she works only four days per week.

“Female artists are more booked with appointments further in advance. I believe that this is due to the fact that women are better at social media marketing.”

Female artists have found a way to market themselves as well as their work, creating their own online communities that bring in hundreds of clients – and their wallets.

Benson states that this is an instinctively female skill that many male tattoo artists are still learning. Some even refuse social media marketing of their work.

She says that most male artists she knows don’t share their faces on social media. They’re not connecting to their clients. “But, influencing is how you sell these days.”

Over 46,000 people follow her on Instagram. Crowds of admirers are expected to line up for rare appointments with Benson at the Rites of Passage tattoo festival, Sydney this weekend.

Female artists are not only better at marketing themselves online but they are also more likely to find female artists for safety reasons.

Many horror stories have been told about male artists making indecent comments to their female clients, harassing and even sexually assaulting them.

It has made women fearful, and Benson’s customers prefer female artists who are safe and non-threatening.

She explains that a large, tattooed, muscular man can make it intimidating for a young woman, particularly if he is going to be in a vulnerable situation and take your clothes off.

“I had my entire back tattooed, and was forced to be naked in front of the mirror. [a male artist].

“I realize they are just looking at me as a canvas but it still makes you feel vulnerable. Like, ‘Oh my god, this guy’s looking through my entire butt’.

Benson has not had a negative experience tattooing by male artists, but she’s encountered plenty of misogynistic and sexist men in the industry.

Male artists used mock to her feminine, straight-line style and to trash her work as “crappy little Pinterest Tattoos” that were “just made for little girls”.

The same style is making her big and many men have since contacted her to ask how they can copy it.

While there will always remain men in the industry that are afraid of successful women tattoo artists, recent boom in female tattoo artists has allowed women such as Benson to “reject masculine energy in tattooing”.

It also created a space for women to show a softness, and a feminine side to the industry that has been long dominated by men.

“There’s always going to be the traditionalists, super grumpy older men that don’t like it… but for the most part I’d say that the whole industry’s opening up,” Benson adds.

She warns young tattoo artists to be cautious when searching for mentors or apprenticeships in tattoo shops across Australia.

“A tattoo apprenticeship lasts at most a year and is full-time, unpaid, and hard to commit to,” she said.

Apprentices can be exploited by the power dynamic; Benson has heard horror stories about apprenticeships and witnessed tales of sexual, verbal and physical abuse.

“Just because someone is exceptionally talented does not mean they are a good person or trustworthy,” she warns.

“There’s a lot of placing people on a pedestal in this industry, and that can make it easier to do things or trust people you wouldn’t otherwise.”

Benson hopes that the establishment of a governing body or official accreditation pathways for tattoo artists could protect female tattoo artists and other apprentices over time.

Claire will be tattooing during the event Rites of Passage Tattoo Festival On November 11, 11 and 13, Sydney. Tickets available here. The festival is part of National Tattoo Expos’ on-road tour. Rites of Passage will be featured, as will the @AusTatooExpo in Melbourne. 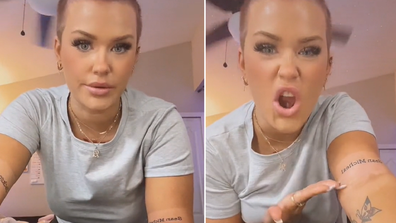