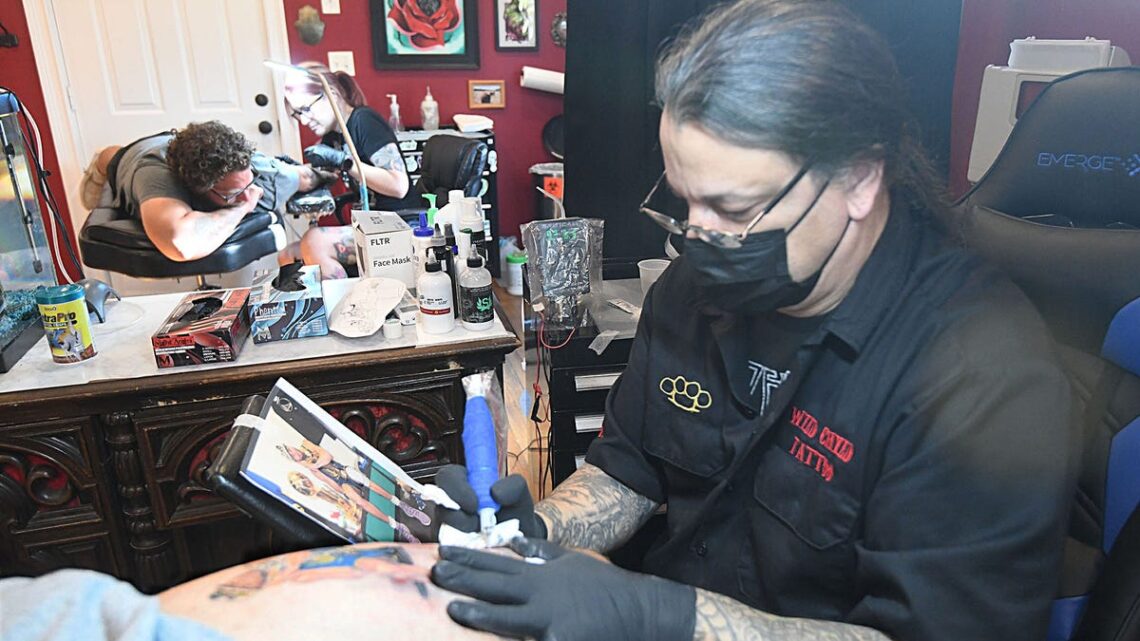 Among the first things you notice when you enter Wyld Chyld Tattoo in Norwich are the constant humming of tattoo pens and cheerful banter of three tattoo artists and their clients.

One of the three tattoo artists, Dee Whitcomb, has been tattooing people for three decades now. The 55-year-old Griswold resident prepares his workspace for his next client.

He throws out all disposable items used in his last tattoo session before the next client even arrives at his station.

“The whole work area has to be cleaned before and after each client,” he said. “I set up barriers to prevent cross contamination. We ask about medical and allergy issues from the client before we start. We take people’s health very seriously in this business.”

He also changes his latex gloves several times during tattooing. He disinfects the area to be tattooed and shaves any hair if that hasn’t been done by the client beforehand.

“I’m a people person,” Whitcomb said, of why he likes tattooing. “I like to talk to people about their lives. Everybody has a story and I like to hear what their story is about.”

Vincent Smith, 28, of Plainfield, arrives for his last of eight sessions of tattooing. He is getting an eight-inch NBA basketball star Seth Curry image tattooed on his left upper leg.

“I enjoy it to be honest,” Smith said, when asked if there is any pain.

“Because I tattoo with love and tenderness,” Whitcomb quipped.

Whitcomb regularly wipes up excess ink and sometimes a little blood during the session that will last about two hours.

What people come in for tattoos?

Some of Dee Whitcomb’s dozens of different colored inks at his business Sept. 20, 2022.
JOHN SHISHMANIAN/ NORWICHBULLETIN.COM

“It’s soccer moms, blue collar workers, plumbers, doctors, lawyers and lots of nurses,” Whitcomb said. “I think our biggest demographic is teachers. …. I get a kick out of some of the stories from our local law enforcement people.”

He got his first tattoo when he was 15 years old.

“I was tattooed illegally in the early ’80s. I got a skull and snake on my upper arm illegally by a biker in the Norwich area who worked out of his house.”

He taught himself how to tattoo when the two-year apprenticeship was not on the books yet.

“When I came into this business 30 years ago there were no rules,” he said. “It was like the Wild West.”

He started tattooing in Miami in 1992.

Griswold volleyballGriswold is taking over the Eastern Connecticut girls volleyball hierarchy. Here’s why.

“This took me to Europe and to the tattoo conventions in Germany. I owned a shop in Germany and tattooed all over Europe at conventions,” he said. “I can’t even list all the countries I’ve worked in. I stayed in Germany for 15 years and then went to Northern Ireland before coming back to Griswold where I grew up.”

“After 30 years, nothing surprises me. Sometimes people want X-rated tattoos. It’s not really bizarre anymore because art by its nature is subjective. What one person considers bizarre another does not.”

What area are the more painful places to tattoo?

“Painful areas vary by the individual. Over the kidneys gets rough, behind the knees and joints are more sensitive.”

He says fingers and the face are painful to some people but not everyone.

How many tattoos have you done?

“Tens of thousands. When I first started in the ’90s it was in street shops. You look at the design on the wall, pick a number and we cranked them out. There were only three shops in the Miami-Fort Lauderdale area for a population of seven million people. We were very busy. In the first year I did over 2,500 tattoos.”

What age can you get a tattoo in Connecticut?

“Our shop is 18 and over. Other shops do 16 with parental consent. Tattooing kids is more trouble than it’s worth. You don’t know who the custodial parent is in a divorce situation. We don’t want to get dragged into the middle of that hassle.”

“Kids are quick to want to tattoo up their entire bodies like the people they see on TV as role models,” he added. “They might want their first tattoo to be on their face or hand before they even start a career. They are limiting their career choices. My career is secure and tattooing the face, neck or hands is not a big deal.”

Cost ranges from $120 to $150 an hour depending of the artist and the speed tattooing. They don’t do laser tattoo removal but at times can camouflage an old tattoo into a new one.

New restaurant in Colchester‘Where I wanted to be’: Fornarelli’s second restaurant a homecoming for co-owner

“We do a lot of that. People make bad choices and they want them covered up. Sometime we can do this and sometimes we can’t.”

Care is important after getting a tattoo.

“You should keep it out of the sun during the healing process. Wash with soap and water, apply ointment, keep the skin moist for ten days. Twenty years down the road it could still look great.”

How did COVID-19 affect the business?

Some of Dee Whitcomb’s tattoo artwork in his book at the business.
JOHN SHISHMANIAN/ NORWICHBULLETIN.COM

“We were closed for three months. It was scary. We didn’t know when or how they would let us open up. Our regular customers were anxious to get back in. A lot of people were out of work, had stimulus money and the time to come back. And they did.”

“I’d like to thank all of our clients because without them we could not pay our bills. We are thankful for the people who keep coming back to us again and again.”

“There is no 401K for self-employed people like us so I’ll probably die in this chair.”