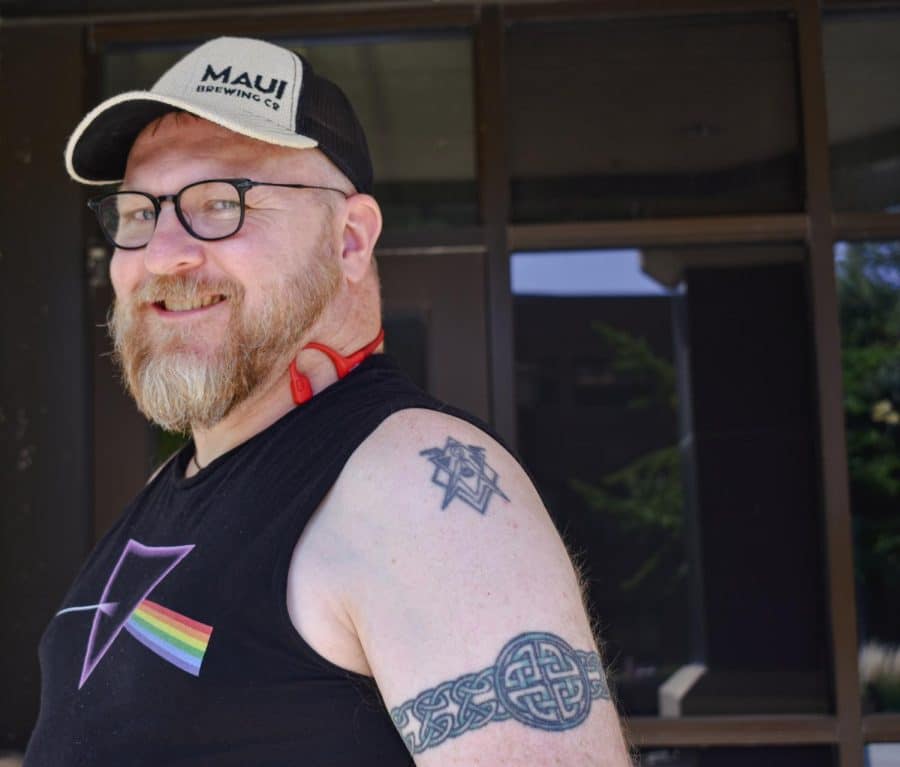 A dazzling emerald emerald wristband with an ornate Celtic Cross. A mysterious black and white crest encircling an evil-looking white eye. The light spectrum is arranged in a waveform so that it can show all of its colors.

While these images might seem random, Chris Stockdale is an associate professor in the department physics. These pictures are much more than skin-deep. To Stockdale, these pictures – his tattoos – represent his identity. “One of the tattoos I have on my arm is from a character in a graphic novel called ‘Starman.’ The character got tattoos at some point in his life to signify certain meanings. That’s where the idea came from [for me],” Stockdale says. “Sort of making a statement to yourself and others about where you’re at in your life.” 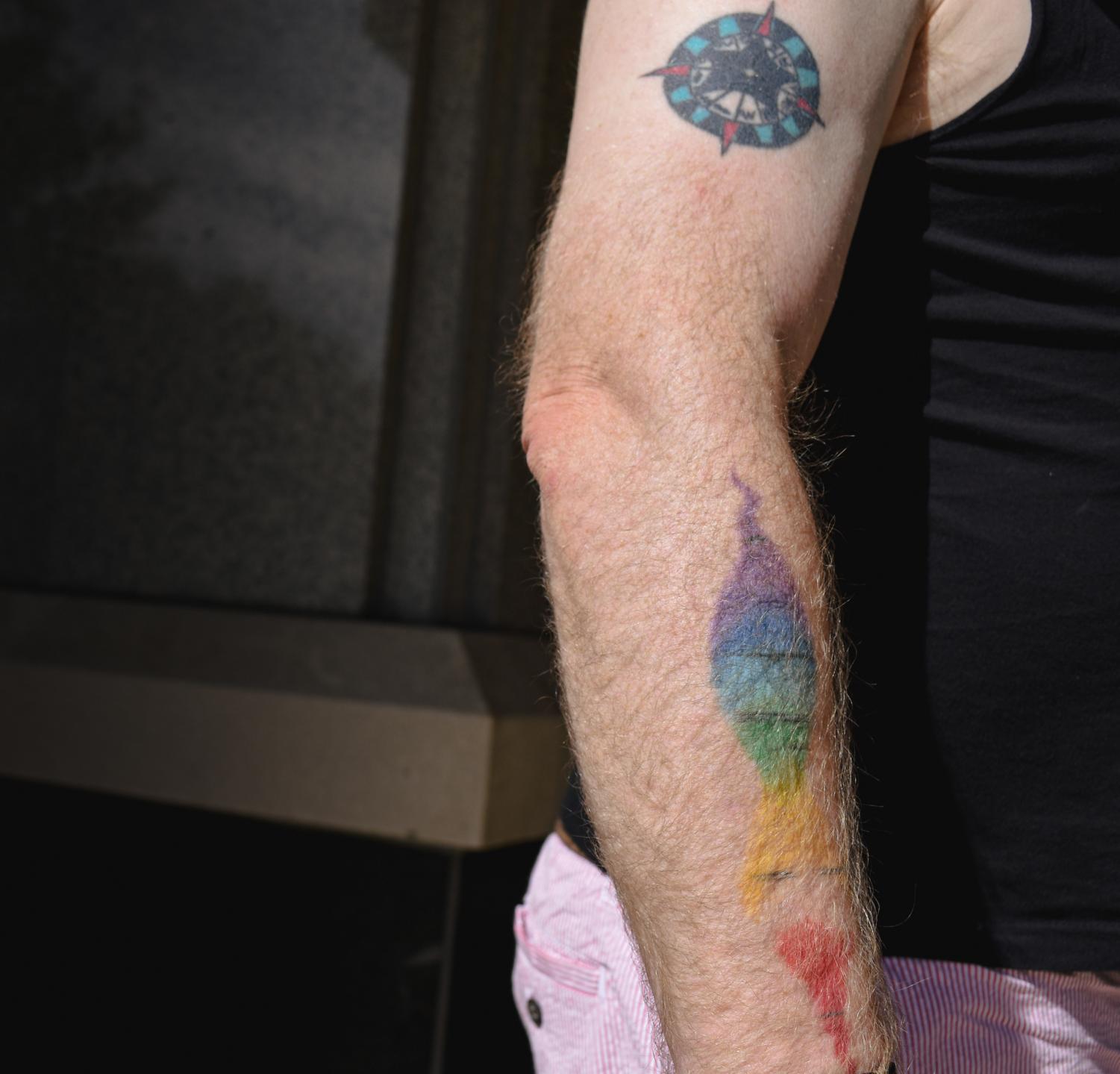 Over the last 22 years, Stockdale has acquired 12 or 13 tattoos – he couldn’t recall which – all symbolizing a different event or important aspect of his life. One of the tattoos, a Celtic Cross, represents his Irish heritage. The other, an upside-down Texas Longhorns logo symbolises his archrival, the University of Oklahoma.

Stockdale got a pink triangular tattoo with barbed wire around the edges last summer.

“In recent years, there’s been a lot of people saying mean things about other folks, especially about LGBTQ+ [people]. The [tattoo comes] from the time of the Nazis; if you were gay, they’d put a pink triangle on you,” Stockdale says. “I just wanted to give a little bit of heritage with that design by adding barbed wire around the edges of it. A ‘Let’s not do this again,’ kind of thing.”

As unique as his tattoo is, Stockdale isn’t the only Marquette faculty member who uses tattoos as a means of describing his experiences. Jennifer Henery, teaching assistant professor in the department of theology, says her tattoo, a pansy on top of a cross along her Achilles tendon, is “very small, very faded and very meaningful.”

The inspiration for Henery’s tattoo was her experience of coming to terms with her life path as she got older. 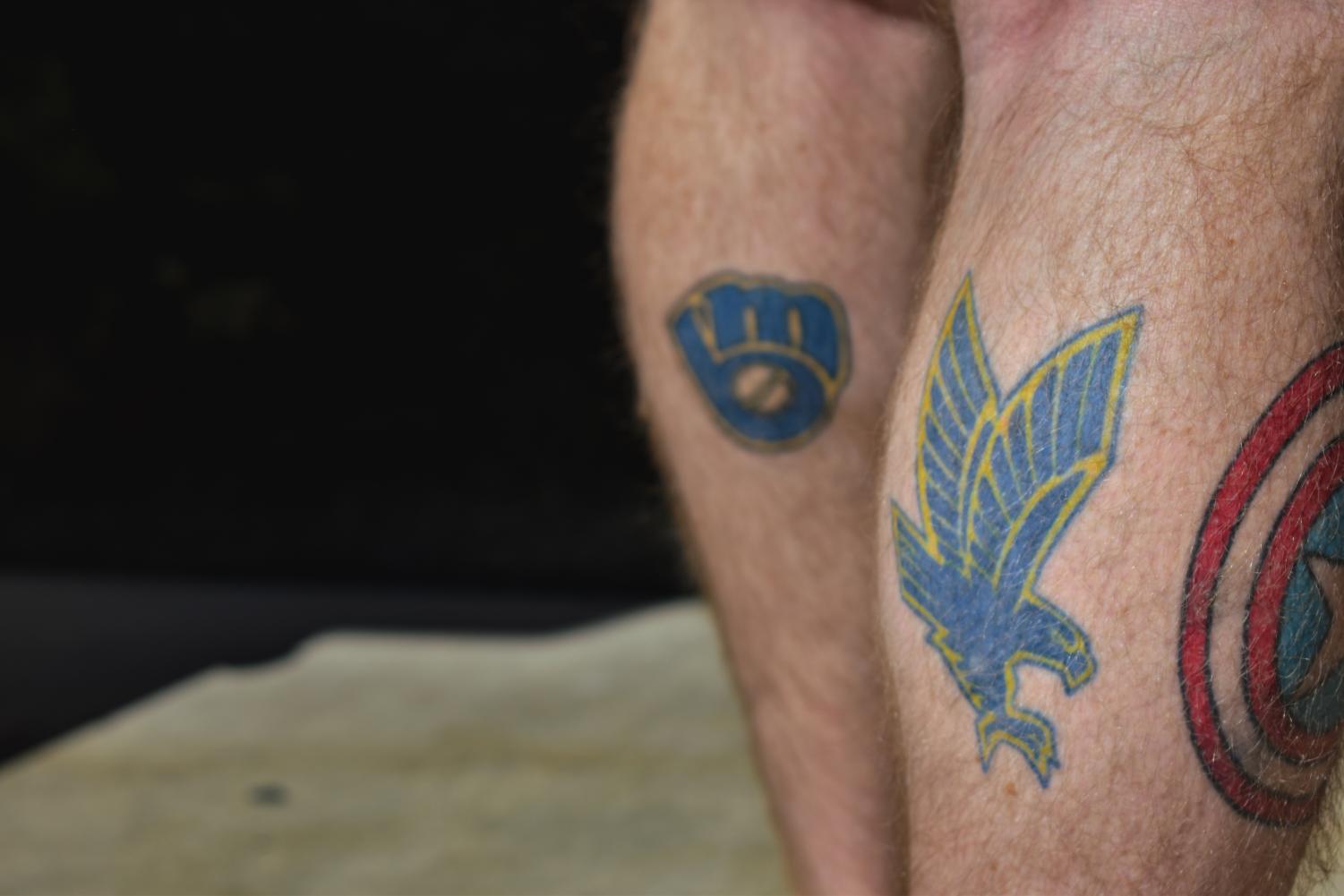 “When I was a senior in college, I had the first of my midlife crises,” Henery says. “Everybody had always said, ‘What do you want to do when you grow up?’ My senior year of college, I had this epiphany that I wanted to be asking different questions. I quit the academic programs that I was in and cut my hair. I also got a mountain bike, and a tattoo. Most of my friends thought I had lost my mind.”

Henery decided to change her major and instead of taking philosophy and theology courses. This helped her to answer the question “Who am I?” Henery says she got her tattoo as a symbol of her relationship with God and her devotion to her faith.

“In the space I was in, I wanted to get a tattoo of the cross, the physical reminder of being marked as Christ’s own, forever,” Henery says. “On top of that, there’s a legend of the pansy, that the pansies were the flowers around the foot of the cross. If you look at pansies, they’re all different colors and looking upwards and have a human-like face, so the idea is that they’re the flowers that Christ’s blood dripped on.”

Henery’s tattoo is similar to the cross-and-pansy. This was due to the myth about Achilles and how, when he was immersed in the River Styx to make himself immortal, the only place that could kill him, was where he was holding his ankle. 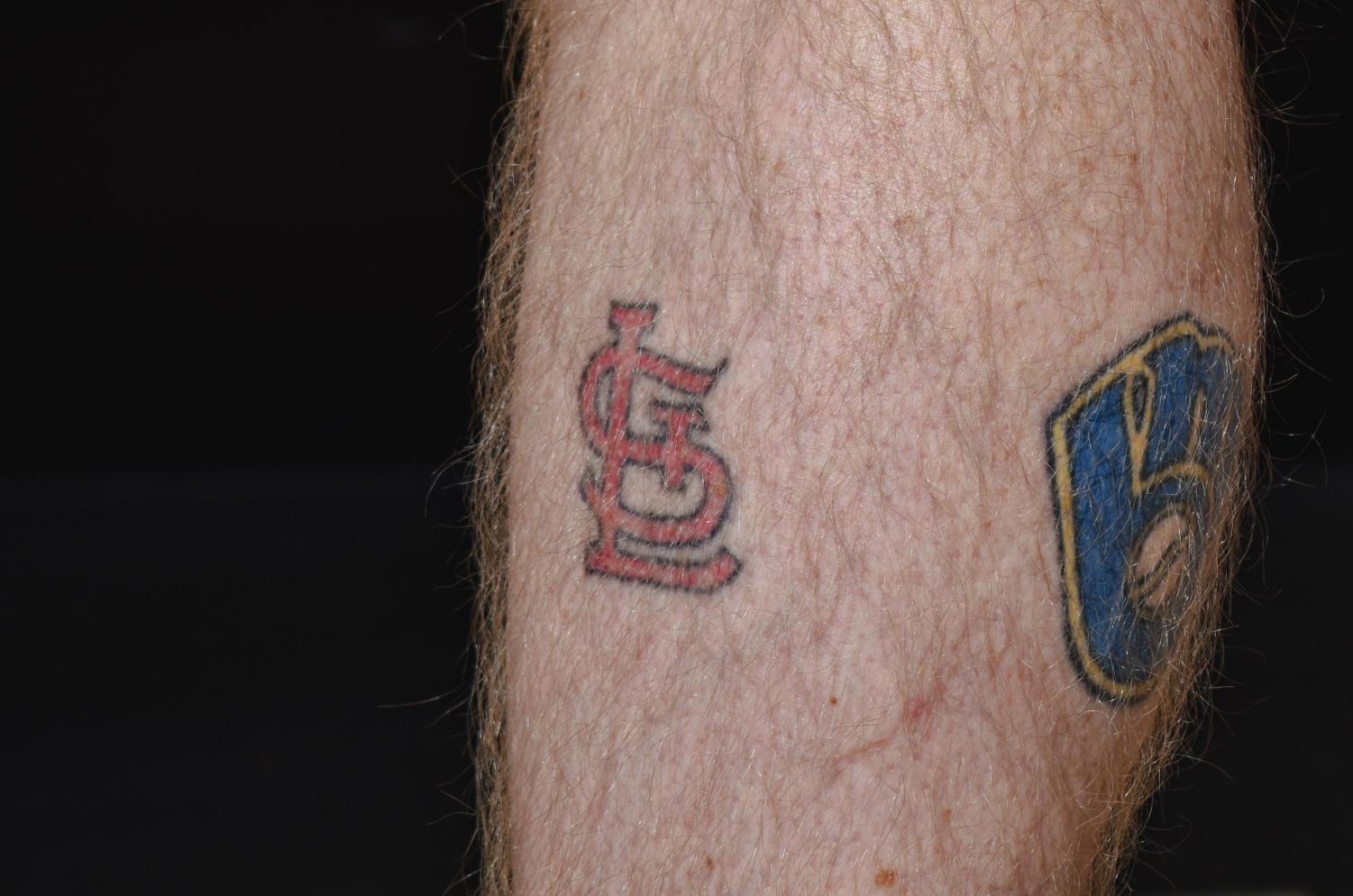 “I had it placed there because it was the one thing I was willing to die for,” Henery says. “Everything I got is intentionally symbolic and connected to my faith journey.”

Henery Davis-Joiner and Joshea Davis Johnson, a junior at the College of Nursing, share a common theme: faith and remembrance. Davis-Joiner is proud to have seven tattoos that represent a different part of her life. One of these tattoos is the first she got, and it’s a memorial for Joshua. It’s featured on her right arm.

“It’s just our names with a heart,” Davis-Joiner says. “I wanted a place that wasn’t going to hurt that bad, which is why I picked [my arm]. It’s a reminder of why I do what I do and I see it all the time [when] I write.”

Davis-Joiner believes that other tattoos on her body show aspects of her, including her memorial for her brother. Her senior quote, “You do not just wake up and become a butterfly. Growth is a process,” is tattooed along her spine as a way to remember how much has changed in the past few years.

“COVID-19 was an important part of my senior years. To pick a quote that resonated with that period and how we’re still living currently in a pandemic just reminds me where I was and how far I’ve come,” Davis-Joiner says. “I don’t just go to college and it all happens – growth is a process, you never stop growing. I think that transition from being a teenager to an adult is something that really stuck with me.”

In terms of getting more tattoos in the future, Davis-Joiner says she would be willing to, just so long as she has a reason for it.

“When I become a mother, I want to tattoo my children’s names and initials,” Davis-Joiner says. “When I get married, obviously I can’t wear my ring everywhere because I’m a nurse, so I want my husband’s initials tattooed on my finger. I also want a leg tattoo, but I’m not sure where.”

Davis-Joiner says she is open to acquiring additional tattoos in the near future. However, Henery states that for now, she will probably not recolor her tattoo or get a new one.

“My 18-year-old self at the time really needed this outward, visible sign of this transition in my life,” Henery says. “Nowadays, not so much.”

Regardless of whether or not he gets more tattoos any time soon, Stockdale says he is happy to be able to express himself despite what other people – and the university – think.

“I happen to be in a job where I can be a little more expressive. I had some tattoos that represented identity on campus, where it can be hard to identify. I’m in a position where if I have a tattoo showing I might get a weird look, but I don’t feel as threatened,” Stockdale says. “In that instance, well, if someone is offended, that’s who I am and I’m not hiding it.”

Will Eikenbary wrote the story. You can reach them at [email protected] 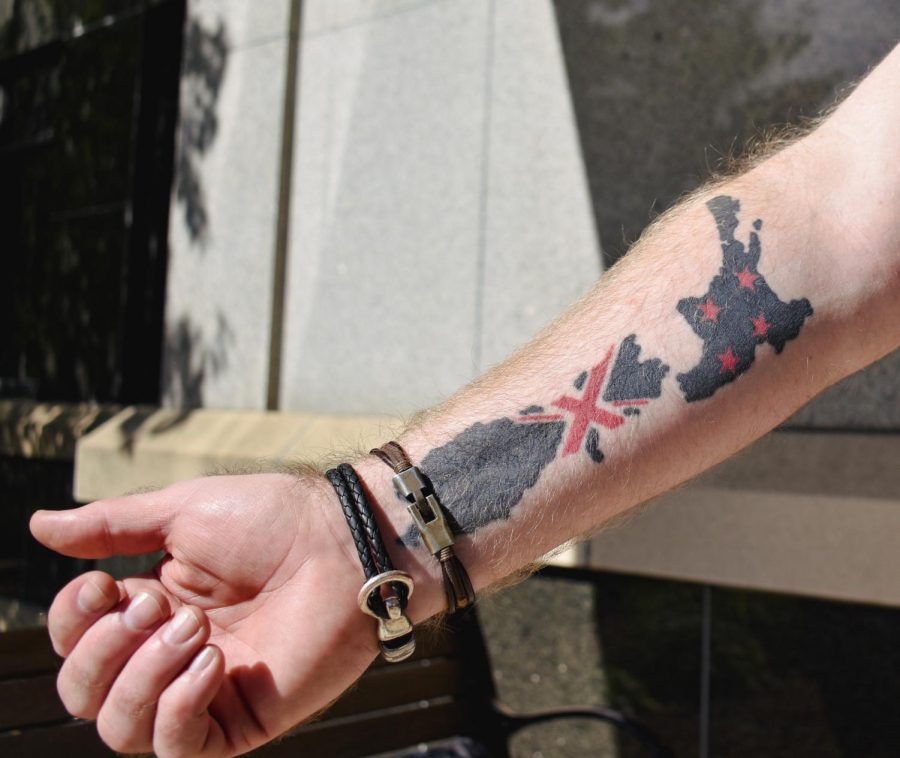