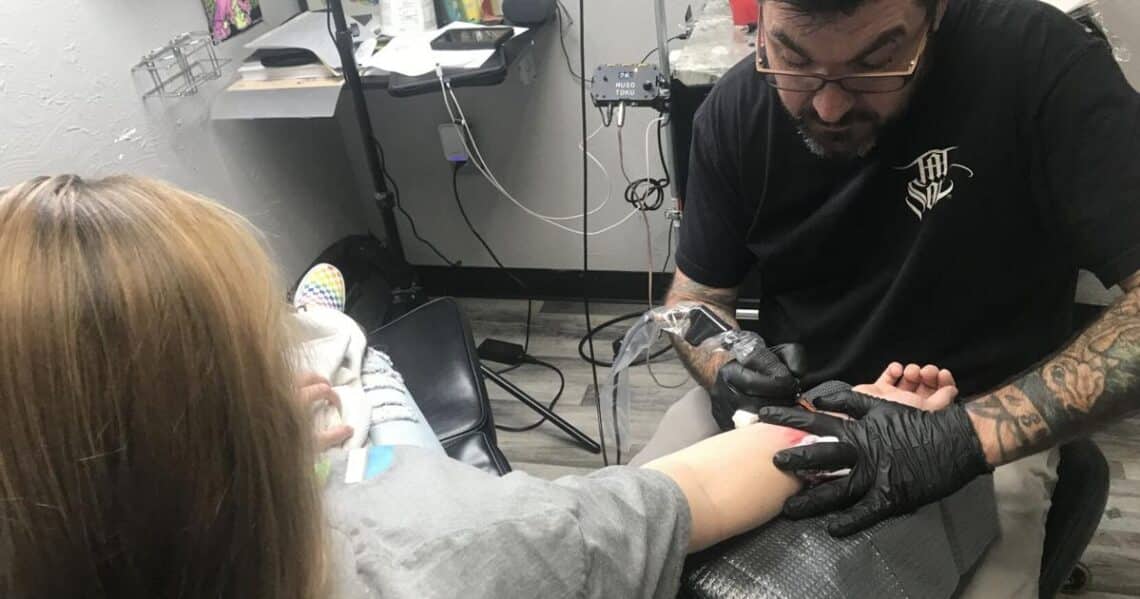 When Carl Sanders first heard about Saturday’s mass shooting that left five dead and 18 injured at Club Q in Colorado Springs, his first thought was to reach out to his friends in the LGBTQ community.

“Thankfully, they’re all OK,” said Sanders, a tattoo artist at West Side Tattoo on Colorado Avenue.

Sanders was able to focus his thoughts on the community that was in need of his help. He felt compelled to do something to help with the healing process.

“I called the owner (of West Side Tattoo) and told him I wanted to do something,” he said.

The tattoo parlor hosted a benefit on Tuesday for Club Q victims and their family members. Sanders created almost two dozen designs for this benefit. The cost of each design is $100 to $200 depending on its complexity. All proceeds were matched by the shop, so “every $100 I make will turn into $200” toward helping the victims, Sanders said.

The funds will be donated through the Colorado Healing Fund, a Denver-based victims’ advocacy nonprofit that has already raised nearly $250,000 in response to the Club Q tragedy.

“I think the community needs to know they have the support of local businesses,” Sanders said. “I also think they need to know they have a safe space here. They are surrounded by friends. There are people here who stand beside them.”

Sanders had a waiting room full of people ready to buy ink for charity around 3:00 on Tuesday.

“I have been blown away by the turnout,” he said. “People want to do their part.”

Kristy Rios was friends with Derrick Rump, a Club Q bartender who died in Saturday’s shooting.

“He was such a great guy,” Rios said. “When something like this happens, you don’t know what to do, but you want to do something.”

Devastated by the death of her friend, Rios drove from her Denver home to visit the Club Q victims’ memorial on Academy Boulevard. There she learned about the West Side Tattoo benefit.

“This is my way of showing love to the community,” said Rios, who got a Colorado “C” logo in rainbow colors on her forearm.

Sanders stated that he hopes that the city will embrace a community still reeling from an attack that left dozens of its members dead and wounded.

“(LGBTQ residents) are as much a part of Colorado Springs as anyone else, so this was an attack on all of us,” he said. “I think we all need community. Without it, everyone will be alone. And that’s a horrible thing.”