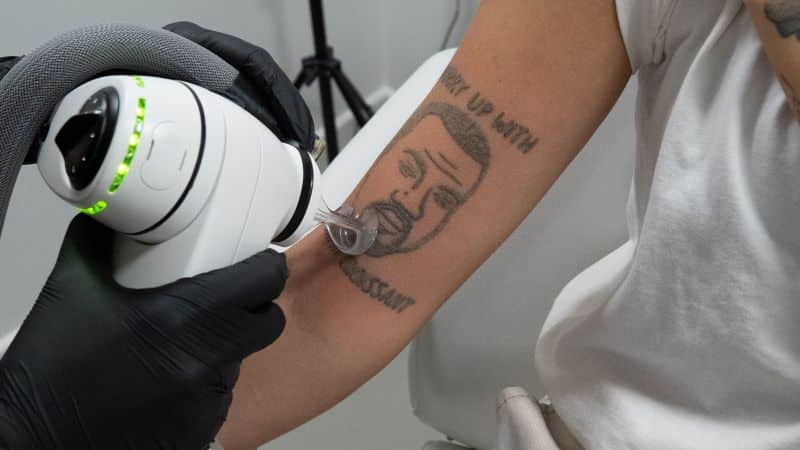 NAAMA, a London-based tattoo studio, announced in an Instagram post that it would be offering free removal. In October, West went on an antisemitic tirade on social media and donned a “White Lives Matter” T-shirt, which triggered businesses like Adidas and Balenciaga to end their partnerships with the rapper and designer. The comments followed West’s yearslong public lurch toward the far right, including praise for Donald Trump, a longtime obsession with Hitler, and calling slavery a “choice” in interviews.

“It seems there are a few former fans with tattoo regret,” he added.

Three Kanye-West tattoo removal clients have already started the process, while 10 others have booked appointments. The process involves using intense pulses of light to break up the tattoo ink, which is eventually cleared away by the immune system, according to NAAMA’s website.

“When you have a tattoo inspired by someone you admire and they start making headlines for all the wrong reasons, it’s not exactly something you want to wear on your sleeve that you are or were a fan,” said Garbett. “With that in mind, we wanted to come to the aid of those who are embarrassed about their Kanye West inspired tattoos and are offering complimentary treatment for all UK fans that want them removed.”

Garbett said that one client the studio is currently treating was victim to social media trolling for her Kanye West-inspired ink tattoo.

The Kanye West initiative was born out of the studio’s existing “Second Chances” project, which provides free laser tattoo removal for clients with gang tattoos, hate symbols, or other traumatic or triggering tattoos.

“We understand that tattoos can be triggering for some people and not everyone can afford to remove their tattoos,” said Garbett.

The treatment would typically cost around £2,000, or $2,456, depending on the size of the tattoo and the number of treatments needed.

Even though West is no longer a partner with businesses, he continues to make racist comments. On Tuesday, West appeared on Alex Jones’ show, where he continued to praise Hitler and promote antisemitic conspiracy theories.