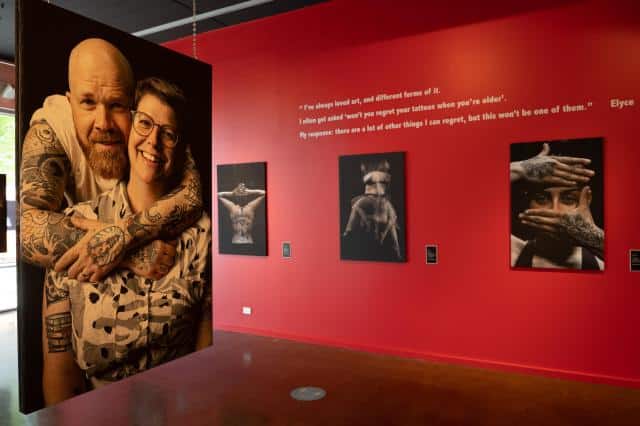 It was once taboo to discuss certain topics, but it is now accepted as a normal part of society.

Eden Foster, Greater Dandenong mayor, attended the opening of the exhibit on 29/11.

“There was a time when tattoos were hidden, and now tattoo artists and tattoo parlours are found in every suburb,” Cr Foster said.

“They are thriving businesses, and those adorned with tattoos wear them with pride.

“This exhibition celebrates the artistry of tattoos, and highlights the art form’s acceptance in mainstream society.”

This exhibition shows the fluidity and creativity of creative practice as an artistic form.

The exhibition was assembled with Elyce Morison, a tattooed model, and Shane Von Dort (photographed by Tommy Kuo and Bronwyn Watson).

Ms Watson picked up photography in 2014 when she was in university and as a tattooed person herself, she says she’s been obsessed with it since she was a teenager.

“I grew up listening to punk music, playing video games and I have tattoos myself, so it was cool to see what other people had on their skins,” Ms Watson said.

In modern times, design is carefully chosen to symbolize the unique stories of individuals and provide living documentation.

Ms Morison said: “I’ve always loved art, and different forms of it. If it wasn’t for the cost (and pain), I’d be covered.

“I often get asked ‘won’t you regret them when you’re older?’. My response, there are a lot of other things I can regret, but this won’t be one of them.”

Ms Watson expressed her satisfaction with the exhibition’s outcome.

“I was really happy with how it all came together. I really like how my style and Tommy’s style are so different – you’ve got a contrast of different styles.”

Ms Watson found it nerve-wracking to present the art in new ways. The highlight was achieving this.

“We do get a bit nervous when you’re portraying someone and making it work with their likeness, you want to make sure that you do a good job and they like the finished product.

“My highlight was seeing my models’ reaction to themselves and their finished artwork, they really liked how they were portrayed.”