Sahiba Kaur has 27 tattoos and is 26 years old. “Each of these is an expression of my thoughts, beliefs, and the things that I cherish the most,” says this aspiring Punjabi singer, who is popularly known as Sahiba Sherni. “I wanted to look different and stylish when I got my first tattoo four years back but today, my tattoos are much more than mere fashion pieces,” says this celebrity stylist and designer from Delhi. “I tattooed ‘295’ on my arm as a tribute to my dear friend Sidhu Moosewala. I inked ‘Sherni,’ a name VJ Rannvijay Singha gave me while I was participating in MTV Roadies in 2020. My beliefs are literally on my arm. My tattoos give me the strength to face any kind of risk and bear pain in life,” adds Sahiba.

Be aware of the dangers

The European Chemical Agency, an EU agency, states that tattoo inks, permanent makeup, and some other products can contain harmful substances that can cause skin allergies, as well as other serious health effects, including genetic mutations, cancer, and even death. Ink pigments can also migrate to other organs such as the liver and lymph nodes. Lasers can be used to break down tattoo pigments or other substances into smaller parts. The removal of tattoos containing harmful chemicals will not allow them to circulate throughout the body.

“With each of my tattoos, I’m stamped in time. These are like my own journal,” says Mumbai-based social influencer Moose Jatana (21), who came to India from Australia to join the farmers’ protest at Singhu border, near Delhi. Her first tattoo, ‘Inquilab,’ on her wrist was a tribute to the resilience and strength of the protesting farmers. This aspiring filmmaker, who has since been on three reality shows, including Bigg Boss, gets herself inked “each time my heart tells me”. Often people find the tattoo of a snake on her arm intimidating, she says, “but that reminds me of my time in Bigg Boss, a show known for people conniving against each other”.

Although tattooing has been around for centuries, there are many forms that have been used by different tribes. However, the current form was copied from the West, where bikers, and other anti-social elements, would get their bodies tattooed to make statements, according to Sherry Sabharwal, sociologist. “A tattooed body of a sports icon like Virat Kohli, Suryakumar Yadav or KL Rahul gives validation and we find people ready to experiment with their bodies.” Many in their late 60s and 70s too are getting tattoos made on their bodies as they feel they have lived with enough care and it’s high time they took risks with their life, she adds.

‘Godna’, ‘tarajva’, ‘pachai kuthu’, etc — the art is known by different names in various parts of the country and goes back centuries as a symbol of identity, gender, faith, caste, traditions and belief systems. The art form has many meanings and is deeply rooted in the cultural and historical heritage of India. It can be found in tribes such as the Santhals of Bengal and Jharkhand and Todas in Tamil Nadu. Dhanuks of Bihar, Rabaris in Gujarat and Apatanis, Arunachal Pradesh, tattooed women to make them less attractive, while they were symbols of manhood for the Konyak tribe in Arunachal Pradesh.

Simmi Waraich, a psychiatrist, attributes tattoos being seen in a statement piece to more autonomy and a higher focus on self image through social media. “Using tattoos, nose pins and hair colour is the way to form identity and a sense of self. Standing out from the crowd gives a sense of distinctiveness,” she says.

Rajanbir, a Rajanbir from Shahkot in Jalandhar’s Shahkot district, was drawn to Bhagat Sing’s tattoo. When Rajanbir, from Shahkot in Jalandhar district, began to discuss it with Harminder Singh at Singh Tattoos he took a page out of history and put it on his body. The front page of The Tribune, March 25, 1931 with the news that Rajguru and Sukhdev had been executed, is tattooed on his forearm. I worship these bravehearts who sacrificed their lives for the country.”

Delhi-based tattoo artist Karan Tattoographer (33) has an extreme take: “It is my body, and I can do whatever I want with it.” He has inked every part of his body. In 2017, he got his eyeballs tattooed — an act that can have serious medical consequences and is ill-advised. “As a child, I was very skinny and often a butt of ridicule. I started tattooing when I was 13. I felt a sense accomplishment when the pain made me feel. My skin and body are very important to me. I’m aware that these inks can have long-term effects. For nearly three months, I couldn’t enter a dark room or go out at night.” Delhi-based celebrity tattoo artist Lokesh Verma of Devilz Tattooz strongly advises against such indulgences. “We often get requests for eye tattoos, but it’s a big no.”

Vibhor dimri (30), from Dehradun, is another enthusiast. For the past three years, he has had his body tattooed and is currently getting a complete body suit. He doesn’t post photos to social media. “It is not for the world to see,” he says.

“The stigma associated with tattooing is no longer there. Tattoo enthusiasts are now experimenting with different forms and inks. This has also increased the scope of the art form,” says Lokesh Verma, who specialises in ‘coloured realism’ and is among the pioneers of modern-day tattooing in the country.

According to Rishabh Narang, a Chandigarh-based tattoo artist, the number of people who got tattooed increased after the lockdown ended. “Maybe, the uncertainty of life hit them and they wanted to do things they always wished to,” he says.

This is not a good picture

The growing demand has led to an explosion of tattoo studios all across India. Unorganised sectors make up the majority of this industry which is worth Rs 20,000 crore annually. The European Union outlawed nearly 4,000 chemicals that are used in tattoo inks, permanent make-up products and other cosmetics with effect January 2022. However, dyes and inks made in India still contain many of these chemicals. This growing market poses a risk to lives as there are not enough regulations and laws to regulate the safety and hygiene standards. 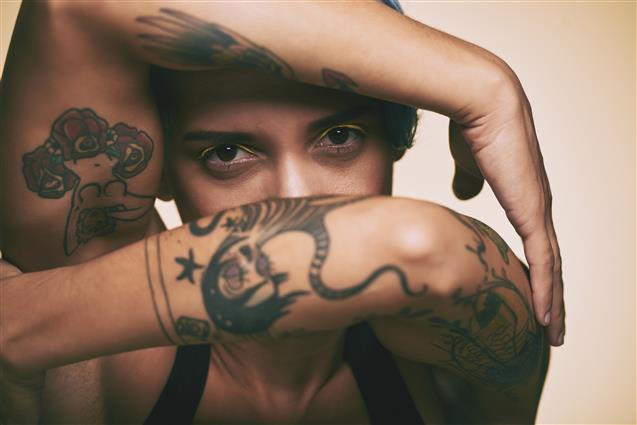 “There is no monitoring of the hygiene standards being maintained at thousands of tattoo studios in the country. Nor is there any check on the sale and use of inks, many of which have been internationally banned,” says Mumbai-based Vikas Malani of Bodycanvas, whose chain of tattoo and piercing studios is a favourite with Bollywood, TV stars as well as Page 3 socialites. “Each state should make it mandatory for a tattoo artist to submit a medical certificate, besides documents of all the products, including inks and needles being used, before opening a studio,” says Malani, who has two tattoo studios in India and one in London.

“In the past 20 years since we have been tattooing, no one from the health department has come to check for the safety and hygiene standards being followed. We have to self-regulate since we follow EU and North American standards at our three stores in India and one in Luxemburg,” says veteran tattooist Lokesh Verma, who has inked celebrities like Tapsee Pannu, Ishant Sharma, Umesh Yadav, etc, adding that “there should be mandatory training in safety and hygiene for every tattoo artist. Only then can we make lives safer”.

“A needle is coming in contact with your skin, and you cannot be casual about it,” says Chandigarh-based skin specialist Dr Monika Mittal. “It is vital that utmost hygiene is being maintained when going in for such invasive procedures. You could be infected by serious diseases. It is important to ensure that the dye or ink you use on your body conforms to international standards. Ink a small patch before going in for a full-blown tattoo,” she suggests. Dr Mittal says it is crucial to understand the history of your skin’s healing before you undergo any invasive procedures. “Tattooing, which is sometimes recommended to hide conditions like vitiligo, can get aggravated if the patch is unstable.”

April Jordan was a ‘doodle monster’ in school. She turned her passion for drawing into a career as a tattoo artist

April Jordan was a 'doodle monster' in school. She turned her passion for drawing into a career as a tattoo artist