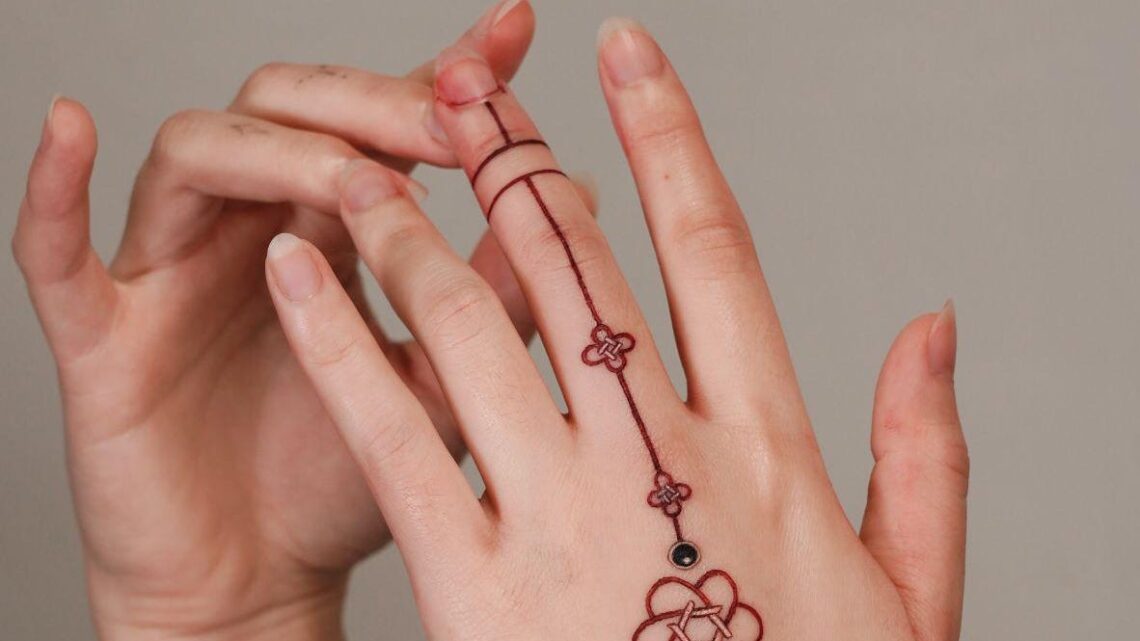 One common theme in her work is the “norigae,” a traditional knot-based jewelry accessory with tassels, that means “playful object” in English. It dates back to the Joeson Dynasty which ruled Korea between 1392 and 1897. This accessory was traditionally worn with the Hanbok—formal Korean attire—in society, worn on the waist as a decorative pendant, alongside other symbolic ornaments. It’s known as both a fashion accessory and a good luck charm. These are typically made of jade, amber, coral and gold. up to $20,000).

Today, it’s a popular design for tattoos, as the design is feminine, whimsical, and elegant. It’s also a niche design in the western world as a tattoo design, but is quickly growing in popularity. Sion explains the reasons this fashion accessory has become so popular in the tattoo industry.

Forbes: How do you relate to the norigae?

Sion Kwak It’s been around six or seven years since I’ve started drawing and tattooing the norigae. These popular knots are deeply connected to people’s lives and knowing the meaning behind them allows us to understand its multi-faceted history. Up until now, it still is an element that can express everyone’s stories, and their journey, which is what I aim to express in my tattoos, as well.

What makes it so popular in Asia?

The daily lives of many people have been closely linked to knots since a long time. This is why many people love and are fond of ornaments and the knots. The meaning it holds also makes it more special, which is why it’s popular in Asia.

Just like how it was attached to people’s daily items like their attire, ornaments, and furniture in the past, it can also be used as a fashion accessory today, like their smartphone.

Is norigae a fashion accessory that is being popularized in the west by designers?

K-culture, Korena Idol, and Korean TV and film shows made it popular worldwide. K-pop acts like Black Pink and BTS reinterpret traditional Korean costumes and ornaments onstage. Korean dramas are extremely popular nowadays. I believe historical dramas in which actors and actresses wear Hanbok with the Norigae have helped to spread awareness about the beauty of this ornament. It has people asking, ‘what is that?’

Your opinion on the fashion of tassels. It has a historic or traditional feel.

Tassels can be used to add or subtract from ornaments. I adore this usage of the tassels, especially in tattoo work, as they flow like waves in the water along a person’s body. One delicate form of a Tassel is made up of many strands. This symbolises our lives.

How can you create unique norigae tattoos with your own symbols that are specific to each client?

I express everyone’s stories into their own personalized norigae. I often suggest symbolic meanings based on the stories of my clients. Clients can also request elements with symbolic meanings to be included in their lives.

What are the knots?

The different symbols of each knot can represent luck, protection, strength and love. Historically, knots were used based on this symbolism and now, it is being expressed on everyone’s skin tailored to everyone’s own life story.

Red is a favorite color of the norigae.

Traditional stories of the red strings are passed down in Asia. Images that relate to red strings are more common and well-known to the public. Each color has a specific meaning, which can also be seen in the tattoo. However, I placed more emphasis on the elements of the design and the knots as a symbolism and meaning. Colors can be determined by individuals’ taste and the balance with the overall design and color.

What symbols are used in these norigae tattoos and what do they represent?

I include symbolic elements in the norigae. Each person’s lives, memories and families can be intertwined into the work. For example, it can be a plant that grew in someone’s childhood home, or a specific element that symbolizes a family and the time they spent together, or simply their identity. There are many other elements that can be added, but most are related to plants and flowers. This is the most important and best part about working – how I can express each person’s precious stories and interpret it into my own style.