Knowing this was my sixth tattoo, it was almost painless to get my latest dragonfly tattoos done.

Tattoos are a form of symbolic art that are represented in the form of permanent ink on the body, which is why I have always found them to be interesting, such as my most recent piece — two dragonflies.

Both my grandparents, on the other side of my family, had died within the past year. One died peacefully in his sleep, while the other passed away from a long battle with physical pain that got worse over the past 10+ years.

After losing them both, I learned that time isn’t something you can return. I decided to try to find a way I could represent them both. For me, art is appealing. Therefore, I decided to have two dragonflies placed on my left forearm as a symbol of them.

The Vietnamese culture considers dragonflies transformational. Because of their belief in Buddhism, I also linked these two creatures with them. The belief system holds that there is reincarnation following death. Which religion we are reincarnated into will depend on how well our actions and those of others while we were alive.

It is a small gesture that made me feel special. These dragonflies were people in my life who helped me become the person I am today.

I’ve always felt like I struggled with communicating my emotions and concerns verbally. That is why I always had an interest in art and making art. I see art as another form for self-expression, just like painters and sculptors who take pride in their craft.

I draw and paint side by side. It began as something I enjoyed in elementary school and evolved into something I wanted to share with others. Today, I enjoy digital painting and making acrylic and pastel chalk drawings.

This interest in art was transferred to tattoos seamlessly because for me it is another form self-expression.

I remember when I started to get tattoos. I didn’t know much about them at the time.

After I got my first tattoo (a snake on the left forearm), I realized that I wanted more ink. This tattoo was originally something I wanted to do to reconnect with my mom. I feel like I have separated from my mom over the years because I have developed my own morals, ideals, and beliefs that aren’t necessarily hers. The differences in culture could partially explain this. My mother was raised in Vietnam in traditional Asian homes, while I was brought up in California with American and Vietnamese values.

My mom’s reaction to the tattoo was very underplayed compared to how badly I thought she would react in my head. She was not shocked, but more put off because she didn’t expect me to get a tattoo that had heavy shading in a very visible area of my body. Her exact words she said to me was “It would look cuter if it was smaller.” That commentary from her just made me laugh.

Progressively over a year or more,  she realized that I was not going to just get one tattoo, but multiple. She realizes that tattoos are something that I really want to get done even if she verbally disagrees with it, usually saying “Oh, the more you get tattoos, the closer your skin will get to being all blacked out.”
Unfortunately, for her, those words do not have any effect upon me.

The idea of getting more tattoos did not arise from my desire to look like other tattooed people, but rather to remember milestones, people, and activities I have had the honor of seeing, experiencing, and meeting as I get older.

Because I was raised in an immigrant culture household, tattooing wasn’t my first choice of self-expression. Tattoos, smoking, partying, drinking and all these other socially acceptable activities in today’s world are still seen to be taboo to them. 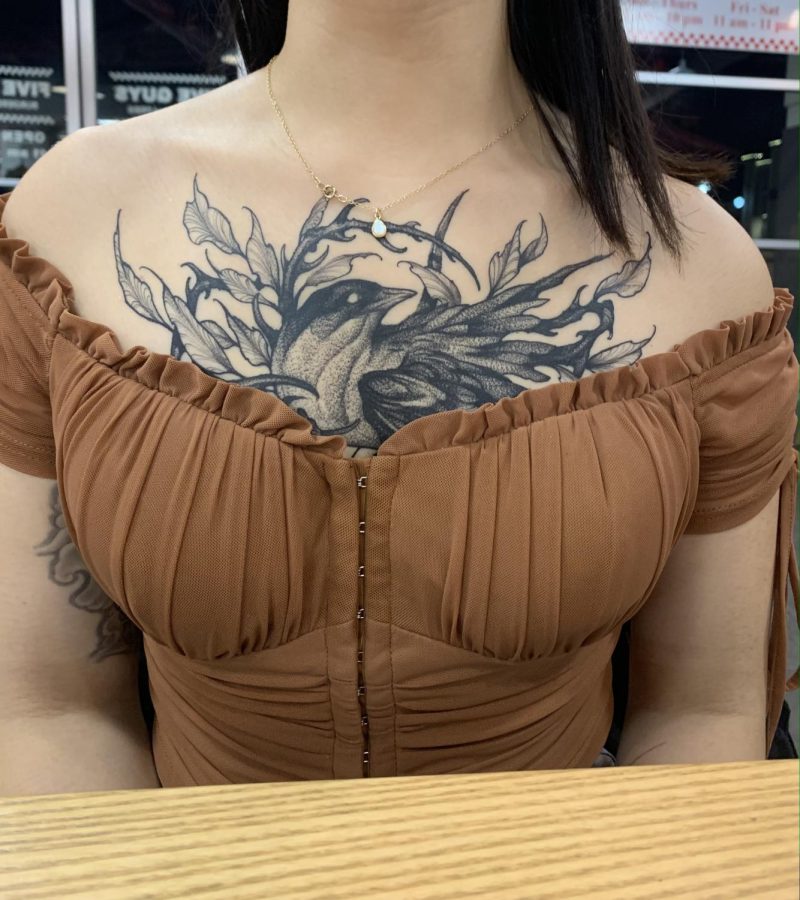 This was my fourth tattoo. In most ethnic households, a person’s middle name is part of their ethnic name. My middle name in Vietnamese is Yen. This means that I am a swallow bird. Because of this, I carry a sparrow near my heart.

I was always interested in body art as a kid, and I had hoped to have piercings or tattoos done. I never brought these questions up to my parents because they didn’t seem like they liked them on themselves or on others, except for my mom. Two small tattoos were left behind by my mom when she went to Vietnam for a vacation a few years ago.

I hoped my mom would be more accommodating to me when I got my first tattoo. She also has a few of them.

Because of the stigma around tattoos, I was worried that my older relatives would be able to see me as an immigrant from Asia. Even now, I cover my tattoos when I go out with my family to hide them. Although they might not express their disapproval directly to me, it hurts because they will share the information with others.

Because I knew that life is short, I needed to have the confidence and courage to go to the tattoo parlor when I was 18.

In a way, outside of the tattoo representing how much I cared for my mom, my first tattoo also represented how much I cared about myself in order to put my own interests first instead of shying away from it due to  fear of getting looked down upon or rejected by my family for doing something that is morally taboo.

I was able to convey my feelings to myself visually, which gave me a boost of confidence. I also found a way to let my creativity flow.

My biggest takeaway from becoming a proud owner of six tattoo pieces, and hopefully more down the lane, is that even though not everyone is a fan of having some permanent modification done to their body — like tattoos, I am a fan of it because it helps me to express my beliefs, how I feel and helps me share the experiences, people and events that I have had the privilege of encountering this far in my life.