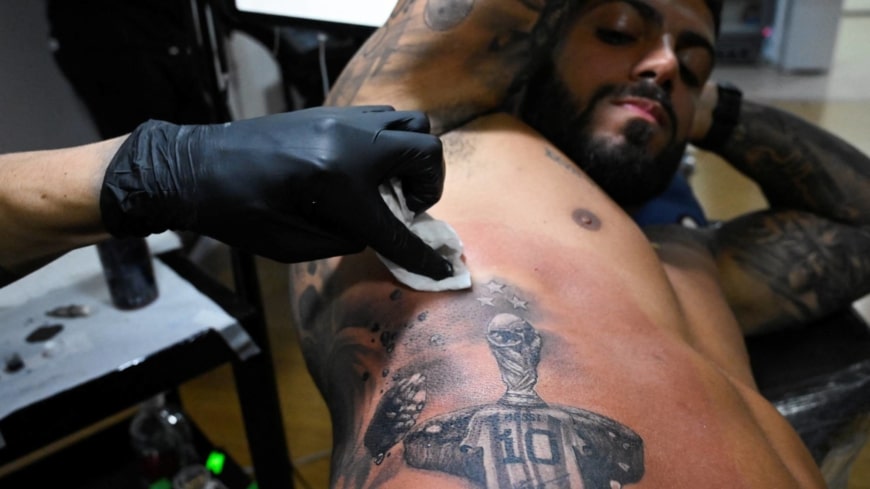 Since Argentina’s World Cup win turned Buenos Aires into a massive street party, tattoo artists have been hard at work inking the image of Lionel Messi on the bodies of fans paying tribute to the man who has come to rival the legend of the country’s other soccer god, Diego Maradona.

In Argentina, where soccer generates something akin to a religious fervor, millions of men and women took to the streets on Tuesday to give the national team a hero’s welcome as the players toured the capital by bus after returning from Qatar.

After a night of revelry, many flocked to the city’s tattoo parlors to commission designs depicting Messi, the team’s star player who led Argentina to its third World Cup win.

“I knew lots of people wanted tattoos of Messi and the team, because they had already booked me before the final,” said tattoo artist Sebastian Arguello Paz, who was wearing the jersey of national team goalkeeper Emiliano Martinez. “I never imagined there would be a queue at the shop the next day.”

Arguello claimed that the phone rang nonstop in his studio with questions about Messi, Argentina and flags the day following the win by Argentina on penalties in a nail-biting semifinal.

“I had decided not to get more tattoos, but when I saw Messi lift the cup, I was sure this guy deserved a tattoo,” 44-year-old Ramiro Solis said.

Cristian Grillo, another fan, inked a side-tatt of a No. 10 Messi shirt supporting the World Cup trophy and three stars, saying he wanted to pay tribute with something “different, special: just like him.”

De Winter is preparing a large-scale design of the entire “Scaloneta,” as the Lionel Scaloni-coached national team is known.

“When Messi said ‘What are you looking at, dummy?’, I knew that if we won I would get it tattooed,” Maria Celia Compagno, 68, said. This phrase now appears on her forearm.

The jibe, made by the usually taciturn captain toward a Dutch striker following a tempestuous quarterfinal, has since been immortalized on T-shirts, internet memes and people’s bodies.