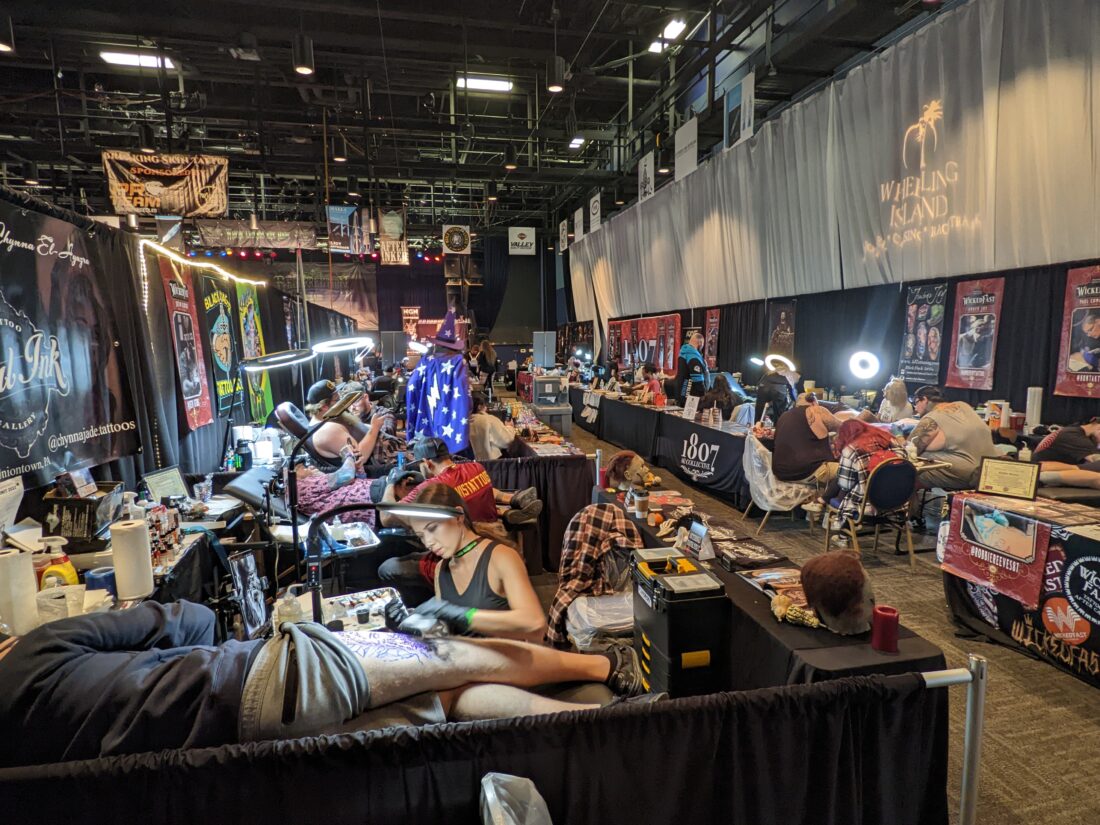 Photo by Alan Olson
More than 130 tattoo artists have set up shop at the Wheeling Island Hotel-Casino-Racetrack for the Resurrection Island Tattoo Convention.

WHEELING — Thousands of tattoo, and tattooed, enthusiasts will have come through the doors of the Wheeling Island Hotel-Casino-Racetrack this weekend for the return of the Resurrection Island Tattoo Convention.

For the second annual convention, more than 130 vendors set up tables in the convention center. Dennis Gilbert, founder of Breaking Skin Tattoo in Bridgeport saw large conventions held in larger cities such Pittsburgh and Columbus, and believed Wheeling would be able support one.

“There’d never been a tattoo convention in Wheeling; you’d have to go to Columbus, Pittsburgh, Morgantown, any big city other than Wheeling, but you can’t see them here, so I thought, why not put one on? People told me it can’t be done– well, this is our second year, and we’ve already got the dates locked in for next year.”

There are many attractions at the convention, beyond tattoo artists who will be performing their art in public in the convention center. Other than artists, there were sideshows, suspended teams, burlesque performances, taxidermy booths, and sideshows.

“We’re bringing something to the Ohio Valley that’s never been here before last year,” Gilbert also added. “We own a tattoo shop and we promote our artists by doing other conventions. Once we’d seen the level of how far the industry had come just from 10 years ago, the difference is amazing.”

Gilbert stated that Wheeling and the casino in particular had been a great venue for this convention.

“The casino’s an amazing place for the event– half the people here that had come from all over the country were here last year, and they love it so much because it’s a cool little town,” He said. “They’ve never been here and had a chance to come, because most of these artists are from big cities.

“For us, it’s huge, but for someone from Atlanta or Portland, it’s small to them, and they love the feel of it. It’s awesome.”

For $20, day passes and $40 for weekends, you can purchase convention passes. Children younger than 12 years are free. The event will be open from noon to midnight on Saturday and noon to 7 p.m. on Sunday.