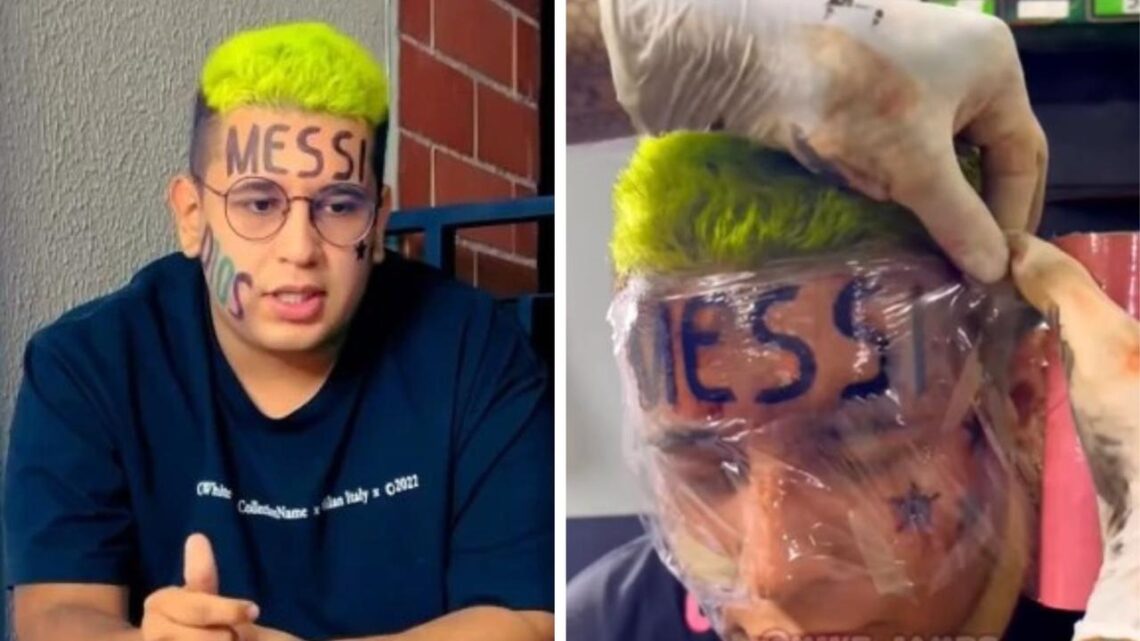 A Lionel Messi fan says he regrets tattooing the footballer’s name on his forehead following Argentina’s victory in the World Cup.

Colombian influencer, Maicol Quinonez, shared the shocking moment he got ‘Messi’ tattooed in huge letters across his head in a social media post.

Mike Jambs, an influencer better known for his work on social media, says that he doesn’t like the tattoo now that it has been two weeks.

The bizarre inking was a tribute to World Cup champion Lionel Messi and Quinonez captioned his post “Fulfilling the challenge. I love you @leomessi’.

The digital creator also had three stars tattooed on one of his cheeks representing Argentina’s World Cup wins and D10s on the other – a play on the Spanish word for ‘God’ and the footballers famous shirt number.

Quinonez has over 143,000 Instagram followers, many of which mock the influencer for using his latest ink.

Viewers commented their thoughts on the influencers tribute tatts, one wrote: “People for likes do very stupid things, I don’t know why I follow you”.

Another commented: “People are so backwards”.

A third said: “Hopefully one day you won’t have to regret it and it’ll actually be worth it, I doubt it”.

Initially, he defended his decision to get the tattoo, telling his followers: “I’m not harming anyone, I’m not doing anything illegal.”

But now he has admitted in a recent social media video that he wishes he could turn back the clock, saying: “I regret having done the tattoo because instead of bringing me positive things, it’s led to lots of negative things, both personally and for my family.”

“I didn’t think I would say this so soon. It was a great feeling. [of it] the first few days, but I regret it.”

“They just say that I am not a positive example for society.”

After the win, tattooists in Argentina received a flood of requests to pay tributes to Messi.

Many fans were also left in hysterics after one fan got a tattoo of the Paris Saint-Germain striker on his back that was labelled the ‘worst ever’ by some viewers.

This story was first published in The Sun.