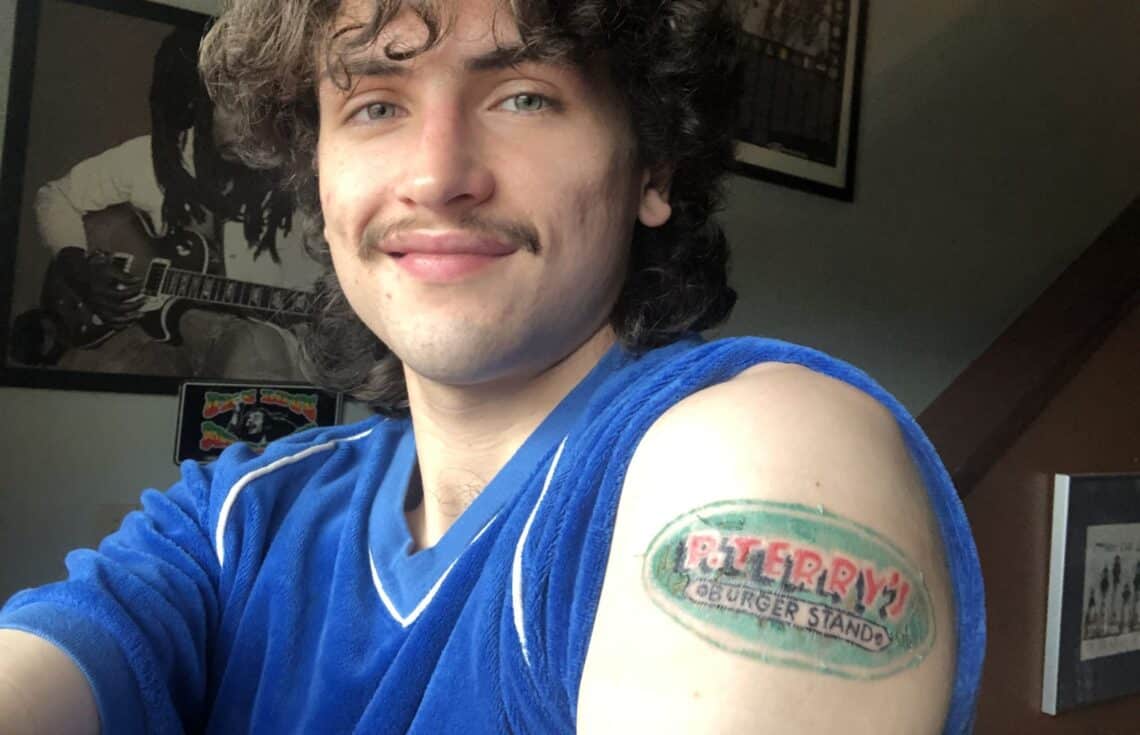 Being a company man is one thing, but Drake Snider took commitment to a whole new level by recently getting the logo of his former employer, Austin burger joint P. Terry’s, tattooed on his shoulder. Raised in North Austin, Snider got a job at the fast-food restaurant’s location at Koenig Lane and Lamar Boulevard when he was 16 years old and a sophomore at nearby McCallum High School. After holding the gig throughout his grade school days, the teen quit out of necessity to attend college in Boston, where he’s currently a sophomore at the Massachusetts College of Art and Design. But it was on winter break during a trip to Oregon that he made his devotion to P. Terry’s permanent at Bay View Tattoo in Newport, Oregon. A quick Instagram photo of the tattoo was all that was needed to capture his feelings. attract the attention of P. Terry’s CEO Todd Coerver, who thrust Snider into the spotlight and tracked down their one-time worker to send him a care package. Snider spoke to us about his hamburger-slinging days, and his new body art.

When did you know you wanted to celebrate P. Terry’s with a tattoo? This was an impulse or something you’ve been thinking about for a while.

It was something I thought about for a while. I didn’t even think about it for very long, to be honest with you. I really wanted to get my first tattoo during the winter break, and I’d saved up some money so I could finally do it. It was something I had been thinking about for a while and then I felt like: I would love to have something very sentimental that connects into a major first.. I thought about P. Terry’s and all the great memories I had there. It was my first job. Through the people I worked alongside, I was able to save a lot, get my first car, and have had many important first contacts in my life. So, it just made sense and it felt right, and I think it’s a pretty sick backstory.

Did you really expect that your post would get so much attention?

No, actually. I tagged P. Terry’s in that post, and I was like, Alright, that’s probably as far as it’ll go, like they might make a comment or something. That’s right. That’s cool. But I didn’t expect it to blow up to this proportion in any way, so that’s definitely a happy surprise.

Why is it such a rewarding job?

Oh, man. The people I worked alongside were amazing, I have to say. The food is, I mean, I’m going to be straight with you. It’s f*cking delicious. The food is delicious. It was an amazing experience. It was a great experience and I made many friends quickly. I enjoyed going to work. This is something that not many people can claim, especially for fast food. I would go to school each day, then get up and go to work for a five- to six-hour shift. It was a great job. My coworkers were great. Many great perks. They treat their employees with respect.

Oh, man. Okay. I know a lot of people go for the double, and that’s great and everything, but for me, honestly, I just like the number two, the cheeseburger. But here’s what I do. I get two kinds of cheese and bacon. I then add onions and pickles. It’s a lot of fun to load up. I love to personalize it and get extra sauce and other goodies.

Nice. I didn’t even know P. Terry’s had two kinds of cheeses.

We have tons of different types of cheese. We have pepper jack, which is obviously American and Swiss. When we had that … what was it?… the barbecue something burger… we had cheddar, but that was limited time only. It was delicious though. Oh! It was delicious! Yeah. So I get American and a slice each of pepper Jack. It’s funky.

Was there anything your Oregon-based tattoo artist didn’t know about the Texas regional burger joint?

I asked him to send me a photo of what you wanted on his shoulder. He was so impressed that I sent it to him. Oh, it’s a burger stand. Is this where it is? And it was as if, Oh, it’s in Austin, Texas. It’s a local business. It all started in 2005. I explained it briefly to him and he was happy. Right on. He’s like, How can you find this place? And it was as if, It was my first job!. And he’s like, Oh, that’s cool, man. Nice. So, quick little intro for my tattoo artist who’s never heard of it, obviously.

This was your first tattoo. Is there any plan for another Austin-centric Tattoo in the future?

Ooh, that’s a good question. I’m not really sure, to be honest. I’d have to think about that for a little while. But I do love South Congress. It would be something similar to South Congress. There were many good times. Yeah, we’ll see.

This interview was edited to be more clear and longer.