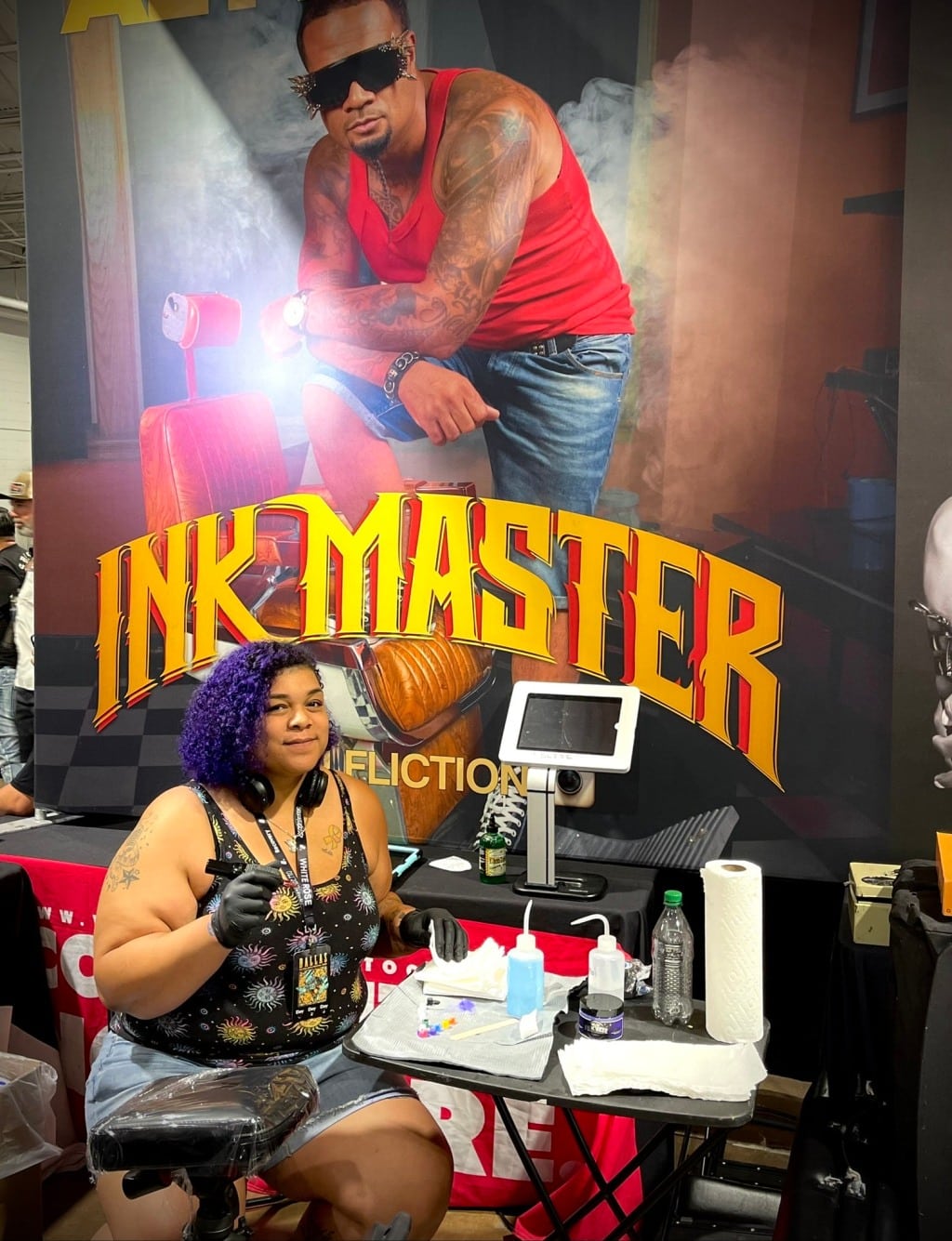 2018 saw the opening of INKspired Studios by Grasso at 720 Broadway downtown Lorain.

With over a decade of tattooing experience, she’s now ready to take her show on the road with Team Fliction, a competitive tattooing team.

Grasso is part of the team and will travel to more that 20 tattoo conventions in 2023. This includes Cleveland Tattoo Arts Convention, March 3-5.

Grasso said she met Fliction at the 2022 Cleveland Tattoo Arts Convention, and he later remembered her as “the girl with the purple hair” after recruiting team member Glenn Wallace to a guest artist spot at INKspired in August.

“He saw the shop; he worked with us for a week, (and) really liked the atmosphere,” Grasso said. “It was about four or five days (later), they were in New Jersey and they called me, and they said ‘We need you for Dallas.’

“I immediately got put straight to work.”

“At the end of the weekend, (Al) came up to me and told me that I was one of the highest-grossing artists,” Grasso said.

Grasso was promoted to a full-time role on the team after her performance in Dallas.

“I only took three shows off my tour list, just for commitments at home with my kids.”

Despite the obligations to Team Fliction, Grasso still is available for bookings through inkspiredstudios.com.

She explained that her time at the shop can sometimes be booked several months or even longer in advance by customers looking for new ink.

Many tattoo conventions offer awards that can help bring recognition and money to artists or shops.

Grasso said that she will compete in 2023, even though she hasn’t yet signed up for awards.

“My team has multiple award-winning artists.”

Grasso stated that she is likely to compete in the medium, small and large categories for female color tattoos.

Her speciality is in tattoos and designs that are vibrant and bold.

Weekends spent on the road offered opportunities for Grasso’s work and to be seen around the world.

She stated that she enjoys the hustle and bustle of her new lifestyle, and is able to work under the pressure of touring.

“I have three all-day sessions scheduled from people that are traveling hours, that I’ve met at conventions,” Grasso said. “Those are thousand dollar sessions.

“I love building the connections, and it also helps, because a lot about tattooing is confidence.”

Grasso will be tattooing in Amsterdam, September in addition to his travels across the United States.

She stated that the team is currently trying to book a convention in Milan, Italy for December.

She said that Northeast Ohio was special to her and that she would love to be there with her shop.

She stated that she enjoys being able to keep her downtown Lorain tattoo shop open.

“I’ve always felt nostalgic about Broadway, even when it looked not so pretty,” Grasso said. “When I was a kid, I lived on East Ninth Street.

“These were my stomping grounds.”

Grasso is currently scheduled for all shows except Omaha, Nebraska, Fort Worth, Texas, and Oklahoma City.