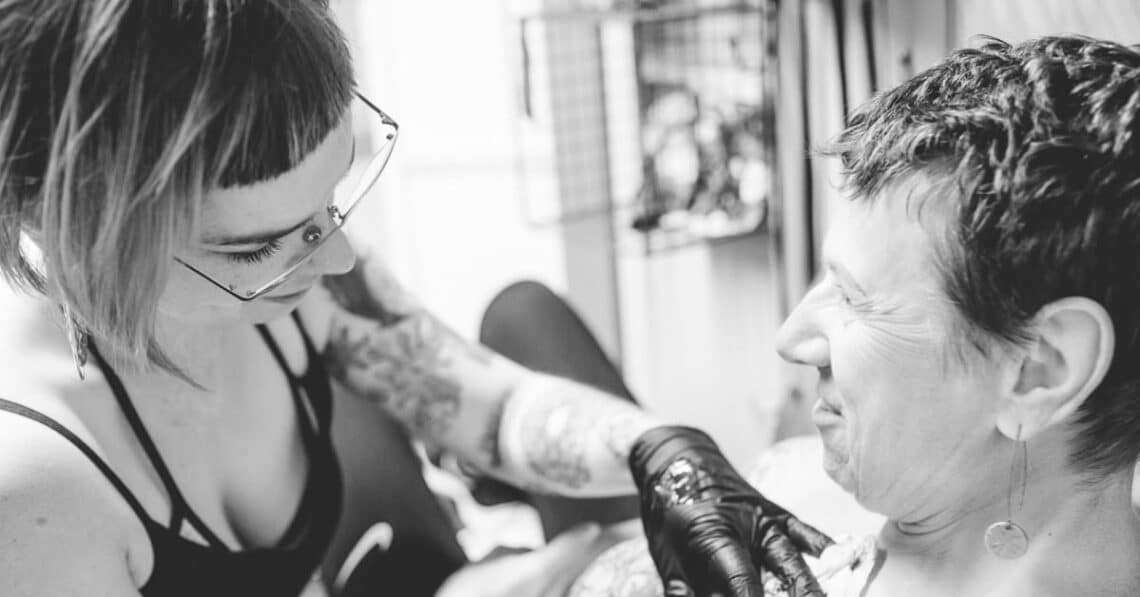 A mastectomy is a quick medical procedure that takes only ninety minutes on average. One where one, all, or both breasts are removed. But despite its brevity, it’s a surgery that has a lasting effect. No matter if a mastectomy is performed, the scar will remain for the rest of their lives. This can lead to self-esteem and body image problems.

One tattooist in Nottingham helps breast cancer survivors accept and celebrate their bodies after surgery. That is Anna Garvey, who has been tattooing nearly eighteen years and specialising in tattooing on scars for ten, working on skin that has experienced “spinal surgery, self-harm, top surgery scars, tummy tucks” and more, with a particular emphasis on creating post-mastectomy pieces.

Part of the Mastectomy Tattooing Alliance – an organisation that helps to both fund post-mastectomy tattoos and recommend artists – Anna describes her work as “applying a beautiful image over an area that has either been damaged or had surgery performed”, which is “a real way for people to take ownership of their bodies and feel some joy after trauma”. A journey that began after a client approached her to do a mastectomy tattoo and she found herself excited by the challenge and the “opportunity to take this journey with somebody”.

People can have tattoos to celebrate their bodies and to express themselves.

Now something of an expert in the field, Anna is among the six artists recognised in the Mastectomy Tattooing Alliance’s directory, which means she is especially qualified to tattoo on post-surgery bodies. As she explains, “It is quite technically unique, because the biological structure of skin that’s experienced trauma is completely different. It’s very much about making minute, continuous alterations. You have to understand how to coax the ink into the skin,” meaning those who create these artworks have to be skilled and experienced.

The artist must also be ready for the emotional nature and the demands of the job. Anna stresses that she doesn’t let her emotions dictate her professional work. However, each session is unique. “So many people I’ve done this on have said they’ve spent years hiding this part of themselves from others and even from themselves, and now they want to show everyone, when sometimes two weeks ago they couldn’t even look in the mirror.” The tattoos give people a chance to re-own their body and to celebrate themselves, and Anna says that “giving people power over how they feel is a really phenomenal thing”.

Full of admiration for her clients, Anna explains that the most inspiring thing about what she does isn’t the artwork but “the work that people do for themselves. It’s really brave to let somebody touch your scar and to look at you, and it’s amazing to see people saying, ‘I can be confident, I can be brave.’” Of course, she thinks these bodies are beautiful herself. “They might be different, but they show strength. They have a beautiful texture of scars that I love. We should never be ashamed of our bodies being different.” Recalling an incident in which one woman’s partner commented after seeing the tattoo, “I hope you see yourself as beautiful now as I see you every day,” it’s clear that Anna wants the same – for her clients to feel strong and beautiful.

For many people, the post-mastectomy tattoo is their first tattoo, and so it’s vital that Anna guides them through this journey with care, especially because the process of getting the initial breast removal can be traumatic. And that’s why Anna puts a real emphasis on “metaphorically holding their hand” through the process and creating a truly nurturing environment. “It’s also really exciting to work on people’s first tattoo,” she adds, emphasising that she loves helping people explore a different side to themselves.

Even though it might seem daunting or overwhelming to consider getting a tattoo after a mastectomy, Anna would be happy to assist you. This could be an exciting chapter in your life. If cancer survivors would like to have a different style of tattoo or are looking for an alternative to a reconstruction, the Mastectomy tattooing Alliance is a great resource. “You can just book a consultation through my website,” Anna explains, “then we can have an open dialogue about the whole process and go from there.”

Daniel calls gran who celebrated 85th birthday with a tattoo!

Are Tattoos A Rational Use Of Resources?

Are Tattoos A Rational Use Of Resources?